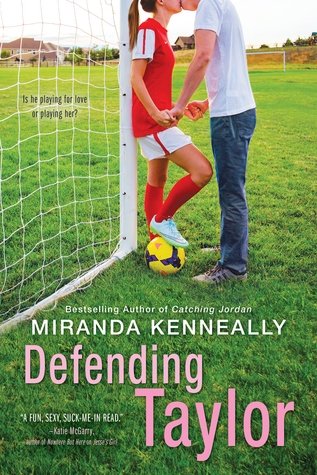 There are no mistakes in love. Captain of the soccer team, president of the Debate Club, contender for valedictorian: Taylor’s always pushed herself to be perfect. After all, that’s what is expected of a senator’s daughter. But one impulsive decision-one lie to cover for her boyfriend-and Taylor’s kicked out of private school. Everything she’s worked so hard for is gone, and now she’s starting over at Hundred Oaks High. Soccer has always been Taylor’s escape from the pressures of school and family, but it’s hard to fit in and play on a team that used to be her rival. The only person who seems to understand all that she’s going through is her older brother’s best friend, Ezra. Taylor’s had a crush on him for as long as she can remember. But it’s hard to trust after having been betrayed. Will Taylor repeat her past mistakes or can she score a fresh start?

I love this book!

It’s a great experience to jump back into the world of Hundred Oaks. This series has been one of my favorites. How awesome it is to have seven novels all revolving around one town? Pretty cool, right?

Since Miranda Kenneally is one of my favorite authors, I jumped into this book with only two things in mind, Taylor and soccer. It’s the featured sport for this novel. I don’t know much about soccer (or football for most people) but I’ve always wanted to try it. I was able to finish this book in one day which isn’t really surprising for a Hundred Oaks novel because I love the series.

Taylor Lukens is a straight-A student, and the incoming captain of the soccer team at St. Andrews, until one incident happened which caused her to cover and lie for her boyfriend, leading to her transfer to Hundred Oaks High. It wasn’t really hard to relate to her character and I think, among all the other characters in the series, I could relate to Taylor best, especially when it comes to being in constant pressure. I like her dedication and her whole personality. She’s snarky, sassy and sweet at the same time.

Anyway, Ezra seems this pretty cool guy, like I said, he’s best friends with Oliver, which means he’s practically best friends with Taylor as well. It’s quite nice to see how their friendship blossomed into something more, because there’s definitely a tension and chemistry between them. I love Ezra’s personality as well.

This book is such a complete package. It dealt with sports, politics, friendship, family, and even disabilities and it delivers really great. I love the family relationship between Taylor and her dad, also with her twin siblings, Oliver and Jenna.

As for the cameos, Jack and Savannah are here. Apparently, Jack’s family are good friends with Taylor’s so we see Jack here for several times. I’m so glad that one of those times is a very vital one for the story.

The way the book handles all the issues is realistic, which is really great. I’m so glad this book didn’t disappoint.