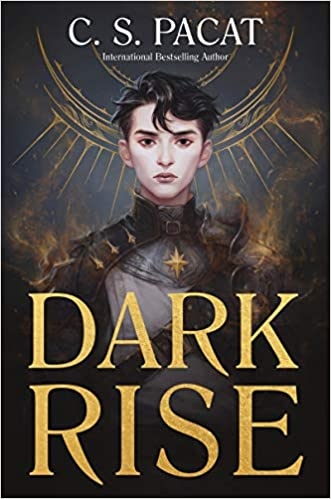 In this stunning new fantasy novel from international bestselling author C. S. Pacat, heroes and villains of a long-forgotten war are reborn and begin to draw new battle lines. This epic fantasy with high-stakes romance will sit perfectly on shelves next to beloved fantasy novels like the Infernal Devices series, the Shadow and Bone trilogy, and the Red Queen series.

Sixteen-year-old dock boy Will is on the run, pursued by the men who killed his mother. Then an old servant tells him of his destiny to fight beside the Stewards, who have sworn to protect humanity if the Dark King ever returns. Will is thrust into a world of magic, where he starts training for a vital role in the oncoming battle against the Dark.

As London is threatened and old enmities are awakened, Will must stand with the last heroes of the Light to prevent the fate that destroyed their world from returning to destroy his own.

Like V.E. Schwab’s A Darker Shade of Magic and Shelby Mahurin’s Serpent & Dove, Dark Rise is more than just high intrigue fantasy—it’s fast-paced, action-packed, and completely surprising. Readers will love exploring the rich setting of nineteenth-century London. This thrilling story of friendship, deception, loyalty, and betrayal is sure to find a passionate audience of readers.

What I Loved: Dark Rise keeps you guessing the entire time on who fights for good and who will fall to evil. The events take place in an alternate London. Will Kempen learns that in ancient times there was magic and a forgotten battle against the Dark King. He is pursued by Lord Simon Crenshaw, who killed his mother several months before. He is captured but then saved by Violet, who has the Strength of the Lion. The Steward Justice takes them into the magically protected Hall of the Stewards that has held the line and kept the history since those ancient times.
So many truths are revealed in Will’s pursuit to unlock the magic the Stewards are sure he possesses.
The Stewards tell him he has the blood of the Lady, the only one who can defeat the Dark King when he rises again. Violet must keep secret her blood of the Lion because her ancestors served the Dark King. The Stewards are the last hope for the light, but the way they come to their power is dark and likely to destroy them all. Will can’t explain why he is drawn to James, the Dark King’s Reborn servant, and frees him when he could enslave him.
He has instant chemistry with Katherine who is Simon’s finance. He promises to protect her and tells her to join him at the Stewards Hall.
As Will navigates his new reality he begins to slowly realize no one fully understands the part he will play in the upcoming battle of good and evil.

What Left Me Wanting More: The concept of the Reborn was a bit confusing. They have the memories and powers they did when they died in the ancient war. Yet, James talks about not being able to remember his past except in glimpses. He was born and raised by the stewards until they realized who he would be in the war and he has yet to come into his full magical power.

Final Verdict: Dark Rise gets more suspenseful as the plot unfolds. It will be interesting to see what happens in the sequels. As the battle against good and evil unfolds who will end up on what side of the battle? Destiny may dictate a certain set of actions but the characters have made choices that may change everything.

Spineless
Big Game (FunJungle #3)
Lion Down (FunJungle #5)
Panda-monium (FunJungle Book 4)
Punky Aloha
When Santa Came to Stay
Busy Betty
Raising the Horseman
Hunterland
Armadas in the Mist
The Darker the Skies
Jester
The Drowned Woods
Zyla and Kai
A Duel with the Vampire Lord (Married to Magic, #3)
Meet the Moon
The Second Death of Edie and Violet Bond
The Honeys
Big stuff planes, rockets, spacecraft!
Put a Lyd On It! (Wrassle Castle #3)
Dressing Up the Stars: The Story of Movie Costume Designer Edith Head
Ask the Girl
Dinos Driving
A Synagogue Just Like Home
Bear Has a Belly (Big, Little Concepts, 5)
Biscuit and the Great Fall Day (My First I Can Read)
Listen Up! Train Song (Big, Little Concepts, 2)
The Long Ride Home
Big Lies: from Socrates to Social Media
Raising Don: The True Story of a Spunky Baby Tapir