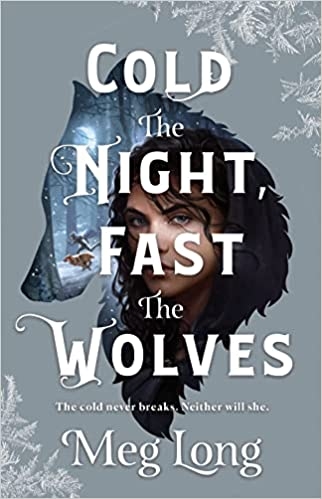 Meg Long’s Cold the Night, Fast the Wolves is a captivating debut about survival, found family, and the bond between a girl and a wolf that delivers a fresh twist on classic survival stories and frontier myths.

On a frozen wasteland of a planet, a girl is on the run with a wolf who is born to be a killer but bound to be her guide. As they fight to escape ice goblins, giant bears, and a ruthless leader intent on trapping them both, one question drives them relentlessly forward: where do you turn when there is nowhere to hide?

COLD THE NIGHT, FAST THE WOLVES is a riveting and slow-building YA fantasy adventure. On Tundar, an ice planet, the city of Ket is run by crime bosses and corporations (corpos) who use the outpost as a means to gather exocarbon, a highly valuable resource. As the mines are difficult to reach by ship and the terrain dangerous, the race was formed with great rewards and great risk. Racers travel on sleds with vonenwolves (genetically engineered dog/wolves) to reach the mines, but most do not make it back. Sena’s mothers were two who joined the race for the monetary prizes to be able to move off-world, but they died and Sena was left alone.

Sena lives on the edge of society, pickpocketing where she can, hoping to fulfil her mothers’ dream of getting off Tundar. Her heritage, being that one of her mothers was scavver, the people who live in the wilderness and spurn the corpos, has left her vilified by most, seen as less than. Although she wanted to be a Racer when she was little, after the loss of her mothers, she wants nothing to do with it. When she angers a crime boss, he asks her to make it up to him by healing his prized fighting wolf, Iska, using scavver ways. This sets off a chain of events that leads to her taking a desperate job with a professor, Kaassen, who has come to join the race with his team in order to study exocarbon – and eventually joining them for the race that threatens to take all their lives.

What I loved: The world-building here was really fascinating, with a corrupt society based on corporate greed and built around a dangerous annual race akin to the Iditarod, but with even more barriers and dangers. The beginning of the book builds slowly as we get to know Sena, the major players, and this world, but once the race really kicks off, the story picks up a lot with high-octane danger and action. There is a lot of suspense and lurking peril during the race, not only from the other racers, but also the dangerous terrain and wildlife. As things continuously get worse for the scientific team, the question of whether any of them would make it looms larger and becomes more and more uncertain.

The characters are quite compelling. Sena is a prickly one that takes a while to really understand but is definitely worth it as she slowly grows during the story and reevaluates her choices. The scientific team contains characters that become easy to love for their camaraderie, their hope, their passion, and kindness. When faced with many who treat her poorly for her heritage, their relationships are a breath of fresh air. Remy is a particular favorite, and her story is fleshed out later in the book, raising a lot of questions and building the broader universe in new ways. Iska really steals the book though. This fighting dog is something amazing and captures the relationship between Racer and animal in a really beautiful way. Iska is really central/critical to the story, and her bond with Sena is the propelling force and turning point of the story. Her personality also really shines through the story, making her a strong character.

The book also tackles some important and thought-provoking themes around corporate greed, climate change (some peril along the race is due to warming planet temperatures from corpo activity), found family, emotional healing, genetic modifications/engineering, prejudice, and animal/human bonds. These themes really propelled the book forward and made it very compelling. The ending also felt like it could lead into another book that I would be very interested to read.

Final verdict: An atmospheric YA fantasy adventure, COLD THE NIGHT, FAST THE WOLVES is full of action, danger, compelling characters, and fascinating themes that made this a riveting and suspenseful read. Highly recommend for fans of SPIN THE DAWN, CROWN OF OBLIVION, and THE BONE WITCH.

You are here: Featured Review: Cold the Night, Fast the Wolves (Meg Long)