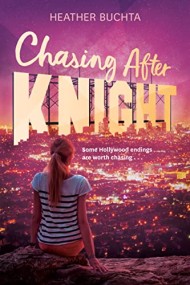 From Beyond the Break author Heather Buchta comes a funny, romantic novel about a girl trying to make amends with a former best friend. The thing is: healing someone else’s broken heart has its complications, especially when he’s now an A-list movie star.
High school senior Alexa Brooks had it all figured out. Study hard, nail the extracurriculars, stay focused, and life would follow the carefully crafted plan. The problem is this plan was designed for one thing: making her forget all about her once-best-friend, former-potential-boyfriend, Carson Knight. Four years ago, he was the boy who always made her laugh, the boy she loved, and the boy she mistakenly and very publicly betrayed. Oh, and he was also the boy who grew up to become a heartthrob A-list actor, named Cayden McKnight.

An innocent-enough school assignment suddenly brings Cayden to the forefront of Alexa’s mind, and her celebrity-crazed best friend Lindsey discovers the old connection. Convinced that his Hollywood bad boy image is the direct result of Alexa and Carson’s fallout, Lindsey convinces Alexa to find Carson and reconcile, but reaching an A-list movie star is not as easy as it used to be when he was the kid Alexa called every night before bed. Unable to apologize in person but determined to somehow right her wrongs, Alexa goes on a quest to remake Cayden’s image, doing good deeds in his name. But nothing is as it seems in Hollywood, and even when she’s able to finally face Cayden McKnight in person, Alexa can’t break through to the Carson she once knew. Is it really too late to make amends?

Alexa Brooks has her whole life together. At least that’s what she thinks before memories of her childhood best friend start coming back to her. She quickly realizes how much she misses him and with the help of her friend Lindsey, comes up with the idea to make amends with him. The only problem is that he’s no longer the Carson she knew. Now, he’s the famous Cayden McKnight and isn’t the easiest person to reach. That and he holds a grudge against her.

When Alexa finally gets the chance to talk to him, apologizing is harder than she expects. There’s so much to say but he doesn’t make it easy for her. He’s a jerk and she worries that the old Carson is gone forever. Alexa goes from having her life together to stumbling over the right words. The only thing she can do now is trust her heart.

CHASING AFTER KNIGHT is a young adult contemporary romance with subthemes of friendship and coming of age. The story alternates from the past to the present and the flashbacks to their childhood shows us how Carson used to act toward Alexa before she betrayed him. Seeing both sides gives us insight to why Alexa fears he’s gone forever. While Carson is a jerk to Alexa, I love the tension between the two. It revs things up for the reader and kept me wondering what would happen next. Another thing I enjoyed was the humor mixed in to break up the tension. There were times when Alexa was a bit annoying and Carson is a bit too much, but I like seeing them overcome their challenges.

Final Verdict: I would recommend this to fans of contemporary romance that fall into the second chance and enemies to lovers trope. Overall, CHASING AFTER KNIGHT is an easy read that tugs at your heartstrings and leaves you with a smile.

You are here: Featured Review: Chasing After Knight (Heather Buchta)