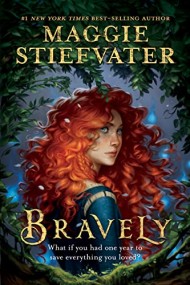 An instant New York Times Bestseller!
What if you had one year to save everything you loved?

ONE PRINCESS. Merida of DunBroch needs a change. She loves her family―jovial King Fergus, proper Queen Elinor, the mischievous triplets― and her peaceful kingdom. But she’s frustrated by its sluggishness; each day, the same. Merida longs for adventure, purpose, challenge – maybe even, someday, love.

TWO GODS. But the fiery Princess never expects her disquiet to manifest by way of Feradach, an uncanny supernatural being tasked with rooting out rot and stagnation, who appears in DunBroch on Christmas Eve with the intent to demolish the realm – and everyone within. Only the intervention of the Cailleach, an ancient entity of creation, gives Merida a shred of hope: convince her family to change within the year – or suffer the eternal consequences.

THREE VOYAGES. Under the watchful eyes of the gods, Merida leads a series of epic journeys to kingdoms near and far in an attempt to inspire revolution within her family. But in her efforts to save those she loves from ruin, has Merida lost sight of the Clan member grown most stagnant of all – herself?

FOUR SEASONS TO SAVE DUNBROCH – OR SEE IT DESTROYED, FOREVER.

BRAVELY is an imaginative and enthralling YA fantasy that takes place several years after the end of Brave. Merida has completed her travels and returned home for the holidays, when she uncovers something dangerous – DunBroch is being threatened by the gods, specifically by Feradach, a being particularly concerned with balance and ready to destroy everything Merida holds dear due its stagnation.

Merida uses a little luck to enter into a bargain with Feradach – she now has a year to prove that DunBroch can change. As she sets out to accomplish what seems like the impossible, she journeys to three other kingdoms to experience their lives. The journeys are sure to change DunBroch – and hopefully the plans of a god.

What I loved: This was a really enthralling story, and I loved the way the gods were presented and crafted, as well as the way that Merida fiercely cares for her family. There are some intriguing themes around change and the power and importance of change that are conveyed throughout the story. Change is really inevitable, and the story embraces it as something to be lauded.

Merida and her family are all really well characterized here with tidbits fans will know and love, but expanded into full characters. Merida’s brothers particularly begin to develop in the story, and it was great getting to know them better. Merida herself is still figuring out her life, protecting her family, and forging ahead, bravely.

The world-building and mythology were really fantastic, and it was great to get to experience the other kingdoms with Merida. The story unfolds well through Merida’s journey, and it was easy to get caught up in it all.

What left me wanting more: I really just wanted more, as the ending was a bit open. I still loved it, but I just want a sequel to see what happens next (this is a standalone though, but I can dream!).