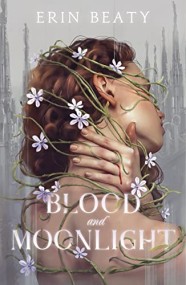 In Erin Beaty’s fantasy mystery-thriller, Blood and Moonlight, an orphan with a secret, magical sight gets caught between a mysterious genius and the serial killer he’s hunting.

Rising above the city of Collis is the holy Sanctum. And watching over its spires is Catrin, an orphan girl with unique skills―for she alone can spot the building’s flaws in construction before they turn deadly.

But when Catrin witnesses a murderer escaping the scene of his crime, she’s pulled into a dangerous chain of events where the only certainty is that the killer will strike again. Assigned to investigate is the mysterious and brilliant Simon, whose insights into the mind of a predator are frighteningly accurate.

As the grisly crimes continue, Catrin finds herself caught between killer and detective while hiding her own secret―a supernatural sight granted by the moon, destined to make her an outcast, and the only thing that might save her and those she loves from becoming the next victims…

BLOOD AND MOONLIGHT is an enthralling YA fantasy/mystery. Catrin is an orphan in Collis, raised in the abbey and currently working for the architect in charge of the Sanctum, a magnificent religious building that sits over the town. Catrin is in charge of checking the scaffolding after a deadly accident, and she does her job well. Her favorite time to check is at night, when few are about. One night when she goes to check, she has an unusual experience and hears someone shouting for help. Her search to save the person results in her finding the gruesome scene and body.

The crime would not normally attract much attention as the victim is poor and with a less desirable profession, but circumstances have led to the comte appointing a venatre (detective) to look into it. As she found the body, Catrin agrees to be interviewed by and then later work with the venatre, Simon, to solve the case before the killer acts again. As the case heats up, Catrin finds herself in the middle of something sinister and threatening.

What I loved: This was a story that captures the reader from the start. The case begins quickly and steadily with Catrin and Simon in the middle of the investigation as it heats up with plenty of red herrings. There was a huge one that I was totally convinced about, and I loved being surprised when I was wrong. The investigation involves a lot of observation and profiling, with a Jack the Ripper feel.

The world-building was lush, and the city is built through the crime scenes with a focus on Catrin’s job and the majesty of the Sanctum. The religions were particularly intriguing, and we slowly learn about the abbey and through it, the religion of the realm which centers around the sun. On the fringes of society are the Selenae, whose religion centers around the moon and whom seem to have magick, unnatural abilities of a magical nature – they are considered heretics and mostly keep to the shadows. This world-building creates a much more intricate and intriguing story.

Catrin was a compelling character, and her story is one of self-discovery and determination. She is beginning to chart her own path, while trying to understand her past and the motives of the people who care about her. Her life had been decided by the Abbey and then by the Magister (architect), and she now is charting something new for herself with the case and investigation, as well as finding new people to care about. Simon was also an intriguing character, and he becomes more full and captivating as we learn more about him and the people for whom he cares. Other secondary characters were also endearing and fully realized, including Juliane, the Magister, and the Abbess, as well as others we meet later in the story, particularly Athene.

Themes around politics, socioeconomic divides, prejudice in the justice system, religion and its prejudices, mental illness, and the value of life. In a fantasy world without an evolved medical system, the treatment of mental illness was handled well. Simon has a deeper understanding of it, though this is still surface level and they find it challenging to treat. The socioeconomic divide of the justice system was also a compelling theme with the investigation ongoing for women that society would typically dismiss.

Final verdict: With lush world-building, compelling characters, and thought-provoking themes, BLOOD AND MOONLIGHT is a YA fantasy thriller that readers will certainly devour. Highly recommend for fans of DANCE OF THIEVES, A TIGER AT MIDNIGHT, and STALKING JACK THE RIPPER.

You are here: Featured Review: Blood and Moonlight (Erin Beaty)