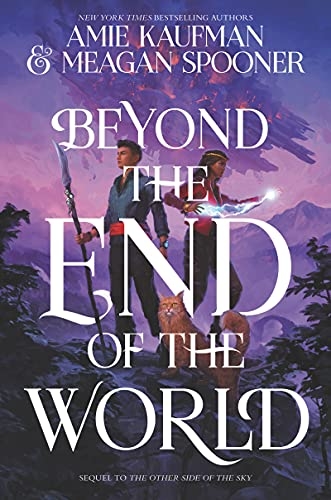 Perfect for fans of Brandon Sanderson and Laini Taylor, this much-anticipated sequel to New York Times bestselling authors Amie Kaufman and Meagan Spooner’s The Other Side of the Sky is a thrilling race against time—with a tantalizing star-crossed love and an electric conclusion.

Above, in the cloudlands, Nimh has no memory of her past, only an aching, undying certainty that she has left something—someone—behind. But while she struggles to recall her identity, an imposter wields her name with deadly purpose.

Below, on the surface, North looks to the sky, desperate to join the person he loves and return to his world. But with only a traitor willing to help him, and others clamoring for him to take Nimh’s place, his home seems more unreachable than ever.

Tragedy looms as the cloudland engines falter and mist rains terror on the surface, and in their desperation to reunite and save their people, Nimh and North face one ultimate question: can they defy their love and their destiny to save their homes?

Or will the spark between them ignite their worlds, and consume them all together?

What an incredible ending! Beyond the End of the World by Amie Kaufman, Meagan Spooner picks up a few weeks after the ending of The Other Side of the Sky. North and Nimh are separated with Nimh going to Alciel with Inshara at her heel and North being trapped Below. The stakes are higher with both their worlds hanging in the balance.

While book one focused more on Nimh (at least I felt like it did), this one focuses on North. North is a world away from the slightly spoiled, highly naive prince we met in book one. He’s forging a path for himself in Below, semi-accepting his role in their prophecies and trying to find a way home to Nimh. His desperation and fear for her leak off the pages into the reader which added to the urgency of the story in a way that only this author duo could pull off. I found myself proud of North, of his dedication to Nimh and her people and his drive to find a way to stop Inshara.

Nimh is lost in Alciel, missing and confused. Inshara is able to position herself in a place of power at the queen’s right hand, even claiming to be Nimhara. As Nimh’s mind slowly recovers its memories, she quickly realizes what is happening and must find a way to stop it. Her resilience in the face of insurmountable odds is what makes her character so likable. While in Alciel, Nimh comes to terms with her divinity and her budding love for North. Is it all a part of the prophecy or is it real? Or does it matter at all?

As much of the first book takes place in Below, we only briefly met North’s family and friends. Because Nimh is in Alciel, we get a chance to revisit these characters and get to know them again through her. I really loved this! Saelis and Mira are two of my favorite characters. They are as North described them, and Nimh recognizes North in them. It was fun to see Alciel from her POV. She’s spent her life Below, away from technology and believing in the divinity and magic which gave us new eyes to see the sky cities.

Overall I really loved Beyond the End of the World. North and Nimh are so easy to root for. I love the two together, what they represent and the different lives they’ve lived up to this point. I really enjoyed seeing the ski cities through Nimh’s eyes. And the world-building! Kaufman & Spooner have created an entire culture here in a setting that is both beautiful and deadly. The foreshadowing is also spot on. I would love to go back and reread it now that I know the ending so I can pick up on all the hints along the way. While I’m sad that it has ended, I’m also satisfied with the conclusion. If you are a fan of YA science fiction with a touch of romance and a heap of adventure, I highly recommend this one.

You are here: Featured Review: Beyond the End of the World (Amie Kaufman & Meagan Spooner)