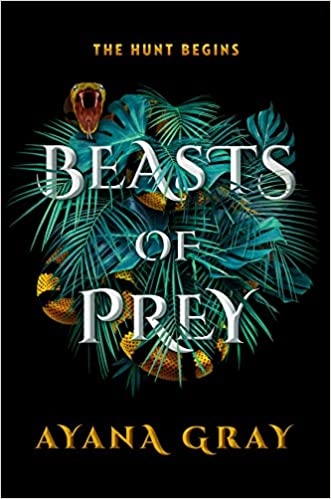 In this blockbuster fantasy series, perfect for fans of Holly Black and Tomi Adeyemi, fate binds two Black teenagers together as they journey into a magical jungle to hunt down the vicious monster who is threatening their home. But as they begin to uncover ancient deadly secrets, it quickly becomes unclear whether they are the hunters…or the hunted.

There’s no such thing as magic in the broken city of Lkossa, especially for sixteen-year-old Koffi, who holds a power within her that could only be described as magic—a power that if discovered could cost her life. Indentured to the notorious Night Zoo, Koffi knows the fearsome creatures in her care and paying off her family’s debts to secure their eventual freedom can be her only focus. But the night those she loves are gravely threatened by the Zoo’s cruel master, Koffi finally unleashes the power she doesn’t fully understand, upending her life completely.

As the second son of a decorated hero, Ekon is all but destined to become a Son of the Six—an elite warrior—and uphold a family legacy. But on the night of his final rite of passage, Ekon encounters not only the Shetani—a vicious monster that has plagued the city for nearly a century and stalks his nightmares, but Koffi who seems to have the power to ward off the beast. Koffi’s power ultimately saves Ekon’s life, but his choice to let her flee dooms his hopes of becoming a warrior.

Desperate to redeem himself, Ekon vows to hunt the Shetani and end its reign of terror, but he can’t do it alone. Meanwhile, Koffi believes finding the Shetani could also be the key to solving her own problems. Koffi and Ekon form a tentative alliance and together enter the Greater Jungle, a world steeped in wild, frightening magic and untold dangers. The hunt begins. But it quickly becomes unclear whether they are the hunters or the hunted.

BEASTS OF PREY is an imaginative and atmospheric YA fantasy adventure. The book is told from three perspectives. We first meet Adiah, a young girl with magical power to control the splendor, training to be a daraja. Far into the future, we visit the same city, which has lost its connection to the splendor (magic), and see the perspectives of Koffi and Ekon. Koffi is an indentured servant at the Night Zoo, where she helps to handle the beasts with her mother. They have worked there a long time to pay off their family’s debts, and Koffi longs to be free.

Ekon is training to be a warrior as part of the Sons of the Six, and it is his only goal. The final ceremony/challenge that would lead to his inclusion is interrupted by a fire at the Night Zoo, and when he and the others go to help, he runs into Koffi and the Shetani, a wild beast who lives in the magical woods and is known to kill everyone it encounters. When Koffi tells the Shetani to leave and it obeys, Ekon is too surprised to capture her, and letting an indentured servant flee is a crime that he pays for with his expulsion from the Sons of the Six.

Both of them know that hunting the Shetani can help them reach the goals they most desire, and so, they agree to work together on a dangerous journey through the magical jungle – a journey that none are known to have survived.

What I loved: The world-building here is phenomenal, and I loved the descriptions of the past, the mythology/history, the jungle and its dangers, as well as the religion of the area. The writing is lush, maintaining a quick pace with the right amount of context and descriptors. The characters were also compelling, and I appreciated the insights from the past (Adiah) as well as the brunt of the story from the present to see how things were and how they have changed. This plot is full of action/adventure in a jungle full of peril, and it was fascinating to see their journey and how they connect and what they learn along the way. The main characters were really compelling, and it’s impossible not to cheer for both Ekon and Koffi, despite that their goals may not be aligned. In places, it’s a real nail-biter with wanting to know what happens next and worrying over missteps. This is a riveting read that keeps the reader hooked.

There are a lot of themes that make this a great book for discussion, including politics, religion, groupings of people, wealth disparity, misunderstanding animals, environmentalism, friendship, family, single-minded goals, mental illness/anxiety, and debt/indentured servitude. This story was really thought-provoking, and there is a lot to unpack and consider, making it quite the powerful read.

Final verdict: With lush world-building, compelling characters, and a riveting plot, BEASTS OF PREY is an atmospheric and imaginative YA fantasy/adventure that will keep the reader on their toes. Highly recommend for fans of KINGDOM OF SOULS, THE TIGER AT MIDNIGHT, and AN EMBER IN THE ASHES.

You are here: Featured Review: Beasts of Prey (Ayana Gray)