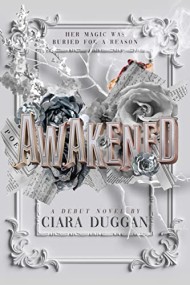 A perfect story for fans of Maggie Stiefvater’s SHIVER, Tracy Wolff’s CRAVE, and Becca Fitzpatrick’s HUSH HUSH.
After losing her parents in an accident only she survived, Hannah is desperate for answers. Haunted by the events of that tragic night, she struggles to move on, yearning for some deeper truth about her loss. But when it comes time to turn a new page and move cross country for college, she vows to leave the past behind. Afterall, Bellcliff University is a thousand miles away from the ghosts nipping at her heels.

Yet when Hannah accidentally awakens a handsome witch from a hidden cave near campus, she realizes he isn’t the only thing stirring out of slumber. Hannah has roused all magic…including the devil herself.

As if spells, curses, and college jitters weren’t enough, this witch claims to know her from four centuries prior—and their connection is more than casual. Thrust into a world of sorcery and monsters, Hannah must fight to keep the magic she’d unleashed from claiming a price far too steep for her to pay.

AWAKENED is a fast-paced YA fantasy that follows Hannah, a 17-year-old who has PTSD from the way she lost her parents nearly two years ago. She is away at college and excited to get a head start on her coursework, heading to the library to do some research. Once there, she comes across a book that seems to be calling to her about magic. As things develop, she finds herself releasing a guy from the 1600s who was in love with her – or someone he thinks is her.

As Hannah begins to learn more about herself and her past, she discovers the world of magic, which has been embroiled in a battle between good and dark with herself at the center.

What I loved: This was a really quick read that had an overall entertaining plot. The simplicity of the characters and pace of the plot will work well for younger YA audiences. The history of magic was intriguing, as was the way that witches have magic and this carries over time.

What left me wanting more: Hannah seemed a bit hollow, and it was tough to really get a feel for her. I was interested in the mental health rep that seemed like it could be really powerful, but it becomes distorted when she begins attributing it all to magic and seems to rapidly get over it. Similarly, she seems to be virtuous and quickly in the middle of everything without missing much of a beat. The romance was also pretty fast and relied on past connection that we do not really get to see, so it was tough to connect with them as a couple. The villain also seemed simple, and it would have been great to have more complexity in the story with more depth for the villain and for the main characters.

Final verdict: AWAKENED is a fast-paced YA fantasy that will work well for younger YA readers who will appreciate the simplicity of the characters and quick plot.