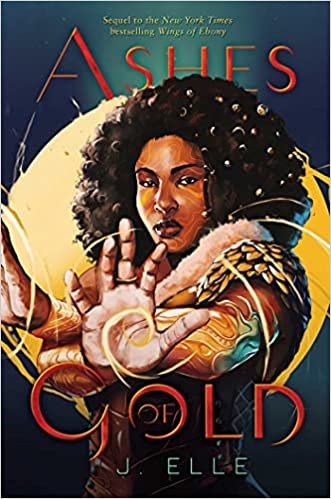 But reuniting with her friends is only half the battle. When she finds them again, Rue makes a vow: she will find a way to return the magic that the Chancellor has stolen from her father’s people. Yet even on Yiyo Peak, Rue is a misfit—with half a foot back in Houston and half a heart that is human as well as god, she’s not sure she’s the right person to lead the fight to reclaim a glorious past.

When a betrayal sends her into a tailspin, Rue must decide who to trust and how to be the leader that her people deserve…because if she doesn’t, it isn’t just Yiyo that will be destroyed—it will be Rue herself.

ASHES OF GOLD is the thrilling and action-packed conclusion to the YA fantasy duology that began with WINGS OF EBONY. Armed with the magic of her ancestors, Rue finds herself in a difficult spot – she is trapped but also bearing the weight of other’s expectations – and her own. Rue carries a lot of self-doubt as she struggles to protect those she cares about, fight those who will do anything to stop her and steal her magic, and believe in herself.

After her mother’s death, Rue learned about her father – the man who had never much been a part of her life. He introduced her to the world of Ghizon, where the native people’s magic and land were stolen and they were suppressed if not all killed by the Chancellor, the man who now presides and deals out his stolen magic to selected subjects. Rue learned that she was a descendent of those who magic was stolen and bestowed a gift of particular magic from the ancestors who have chosen her to help her people. As she did not grow up among these people, Rue struggles to find her place there, all while wanting to do her best to protect her people and secure their future – a chance the Chancellor seeks to stop at any cost.

What I loved: This sequel moves quickly and picks up where the first left off. There is more action, more thrilling characters, and plenty of world-building and danger to keep the reader on their toes. While the overarching plot is resolved and really intriguing, its the themes that really make this a stellar read. There are the themes inherent in the plot of colonialism and the following violence and destruction that leads to genocide, as well as of politics, wealth, and the ability of those who benefit to ignore others. In this story, some of the themes around Rue’s character were the most compelling. She is struggling with accepting herself, believing in herself, and getting others to believe in her. These scenes were some of the most heart-wrenching and beautiful, as she struggles herself and the ways people see her.

Her interactions with other characters and particularly Jhamal, who is a fantastic and aspirational character, really bring the book to life. The romance here is really well done and adds to the journey. The characters are really compelling, even if not always likable, and I enjoyed getting to meet and know the other Ghizoni characters and some of their customs in this sequel. Themes around family (including found family), friendship, and trust continue in this second book.

This is a lot that happens in this book, and I loved the way the plot wound towards the conclusion. In particular, I found the Seer scene to be absolutely fascinating and memorable, and probably one of my favorites (though there are so many good ones). This is a book with nary a dull moment!

Final verdict: With a riveting plot, unforgettable characters, and imaginative world-building, ASHES OF GOLD is the explosive conclusion to the WINGS OF EBONY duology. Highly recommend for fans of BLOOD LIKE MAGIC, A BLADE SO BLACK, and LEGENDBORN.

Whose Bones Are Those?
Poo-Dunit? A Forest Floor Mystery
Piglet Comes Home: How a Deaf Blind Pink Puppy Found His Family
We Made It All Up
True History The Legacy of Jim Crow
Beneath the Trees: A Fine Summer
Cat Eyes and Dog Whistles: The Five Seven Senses of Humans and Other Animals
Echoes of Grace
Ninja Nickels and the Problem with Pickles
Spy School Project X (Spy School #10)
Supernova (Renegades, 3)
Archenemies (Renegades, 2)
Chasing After Knight
Little Fairy Can't Sleep
What Can I Do?: Inspiring Activities for Creative Kids
Animals Illustrated: Ringed Seal (Animals Illustrated, #9)
Spencer Goes to School (Spencer the Cat)
Spencer on the Farm (Spencer the Cat)
Tommy and the Order of Cosmic Champions
Fractured Path (The Mirror #3)
Ravenous Things
Verntropa - The Balance
Blood and Moonlight
Duplex: A Micropowers Novel
The Edge of Summer
The Darkening
Fierce as the Wind
Road of the Lost
Rise of the Snake Goddess (Samantha Knox, #2)
Pigeon & Cat

You are here: Featured Review: Ashes of Gold (J. Elle)