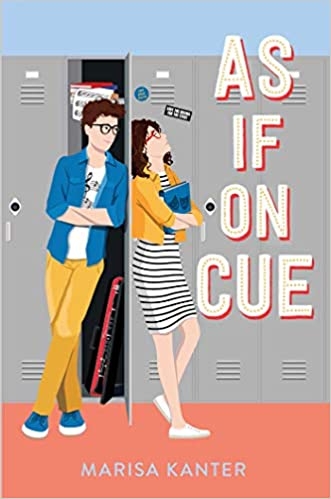 A pair of fierce foes are forced to work together to save the arts at their school in this swoony YA enemies-to-lovers romance that fans of Jenny Han and Morgan Matson are sure to adore.

Lifelong rivals Natalie and Reid have never been on the same team. So when their school’s art budget faces cutbacks, of course Natalie finds herself up against her nemesis once more. She’s fighting to direct the school’s first ever student-written play, but for her small production to get funding, the school’s award-winning band will have to lose it. Reid’s band. And he’s got no intention of letting the show go on.

But when their rivalry turns into an all-out prank war that goes too far, Natalie and Reid have to face the music, resulting in the worst compromise: writing and directing a musical. Together. At least if they deliver a sold-out show, the school board will reconsider next year’s band and theater budget. Everyone could win.

Except Natalie and Reid.

Because after spending their entire lives in competition, they have absolutely no idea how to be co-anything. And they certainly don’t know how to deal with the feelings that are inexplicably, weirdly, definitely developing between them…

Natalie and Reid are lifelong rivals, but when the theater group is in trouble, they’re forced to work together. Everything about Reid infuriates Natalie, especially with the way he always tries to one-up her. Their dads are best friends and she hates having to share everything with Reid. When he goes the music route, she settles on theater and loves writing plays.

To save her theater group, Natalie has to throw together the biggest show yet called Melted. To do this, she has to put the past behind them and work with Reid since it’ll be a musical. Of course, that’s easier said than done. Throughout the story, they butt heads and at times it can be for no appropriate reason. Will they be able to pull of the best musical ever or will Natalie lose her club and her heart?

AS IF ON CUE belongs in the enemies to lovers trope that will appeal to nerds everywhere, especially theater and music nerds. There’s a lot of humor in this book and the author invokes so many different emotions as you read. Natalie does get mad very easily and it’s something she needs to address because she holds a lot of hate. But it’s entertaining to watch the shift from despising someone, to always wanting them around. Throw in Natalie’s friends and I didn’t want to put it down.

Final Verdict: I would recommend this to fans of contemporary romance in the enemies to lovers trope. It’s also a great romance for the nerds of the world!

You are here: Featured Review: As If On Cue (Marisa Kanter)