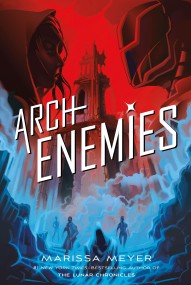 The Renegades Trilogy continues, in this fiercely awaited second installment after the New York Times-bestselling Renegades by Marissa Meyer, author of the Lunar Chronicles.

Now a New York Times Bestseller!
Time is running out.
Together, they can save the world.
But they are each other’s worst nightmare.

Nova’s double life is about to get a lot more complicated:

As Insomnia, she is a full-fledged member of the Renegades, a syndicate of powerful and beloved superheroes. She works with Adrian’s patrol unit to protect the weak and maintain order in Gatlon City.

As Nightmare, she is an Anarchist – a group of villains who are determined to destroy the Renegades. Nova wants vengeance against the so-called heroes who once failed her when she needed them most.

But as Nova, her feelings for Adrian are deepening, despite the fact that he is the son of her sworn enemies and, unbeknownst to Nova, he has some dangerous secrets of his own.

In this second installment of the Renegades trilogy, Nova, Adrian, and the rest of their crew – Ruby, Oscar, and Danna — are faced with escalating crime in Gatlon City, while covert weapons and conflicting missions have Nova and Adrian questioning not only their beliefs about justice, but also the feelings they have for each other.

The line between good and evil has been blurred, but what’s clear to them both is that too much power could mean the end of their city – and the world – as they know it.

What I Liked: I expected book two would be the book where the alter egos of Adrian and Nova would be revealed with all the messy angst that would involve. Marissa Meyer kept me guessing and turning the pages again waiting for that to happen. However, the tension kept building where their guilt is mounting at not being able to be truthful with the person they are falling in love with and it is oh so fun to read.
The Superheroes in charge of the city have revealed that they have finally used Max’s powers to create Agent N. A nonlethal way of neutralizing villains by stripping them of their powers with one injection. That raises so many moral issues that would be terrific for a book group discussion. That sounds wonderful in theory but what about the right to a trial or the possibility of corruption when there are Renegades that are power hungry and not in the program for justice? Nova and Adrian have different reasons for being uneasy about this new development, especially when their alter egos are prime targets for being neutralized.
Nova’s spying allows her to learn about the superhero special items that the Renegades have collected and free reign to scope out the security and layout of the building. She pulls off an awesome heist that would put the anarchists on top once again. However, Adrian’s team also pulls off a major arrest that stalemates them both.
Final Verdict: Nova and Adrian’s alter ego identities are kept secret by a thread in this book and I can’t wait for all to finally be revealed in the last book. I love the relationship and inner struggle they are both dealing with and am ready to see if love conquers all and the world will be righted once again by the force of good. This is such a good addition to the superhero genre.