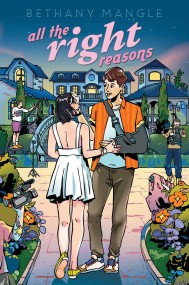 The Bachelor meets Gilmore Girls in this laugh-out-loud young adult romance about a girl who joins her mother on a reality dating show for single parents—only to fall for a contestant’s son.

Cara Hawn’s life fell apart after her father cheated on her mother and got remarried to a woman Cara can’t stand. When Cara accidentally posts a rant about her father online, it goes viral—and catches the attention of the TV producers behind a new reality dating show for single parent families.

The next thing Cara and her mother know, they’ve been cast as leads on the show and are whisked away to sunny Key West where they’re asked to narrow a field of suitors and their kids down to one winning pair. All of this is outside of Cara’s comfort zone, from the meddling producers to the camera-hungry contestants, especially as Cara and her mother begin to clash on which suitors are worth keeping around. And then comes Connor.

As the son of a contestant, Connor is decidedly off-limits. Except that he doesn’t fit in with the cutthroat atmosphere in all the same ways as Cara, and she can’t get him out of her head. Now Cara must juggle her growing feelings while dodging the cameras and helping her mom pick a bachelor they both love, or else risk fracturing their family even more for the sake of ratings. Maybe there’s a reason most people don’t date on TV.

ALL THE RIGHT REASONS is a YA novel that picks up after Cara’s dad divorces her mom, Julia. To cope with this, Cara vlogs about her feelings, but accidentally posts it online. She doesn’t realize her mistake until the video’s already gone viral, which results in a reality tv producer knocking on her door. He wants to put both Cara and Julia on a dating show, where they’d meet contestants and ultimately pick a new spouse for Julia and a stepsibling for Cara. Because Cara’s dad left them in a difficult financial situation, Cara and Julia jump in feet first but aren’t really prepared for what’s to come: meddling tv execs, unexpected romances, plotting and revenge, and worst of all, a rift between Cara and Julia that was never there before.

What I love about this book is the overall tone and nuance that the author, Bethany Mangle, brings to each situation. For instance, even though Cara and Julia both are going through some deeply emotional moments, which Mangle leaves space for, there’s still a feeling that it’s all going to be okay, which is primarily accentuated by some of the most loveable side characters. Sam, even though he’s a bit clumsy and awkward, is equally sweet and endearing. Connor, despite his own struggles, is not only selfless, but also a great listener and incredibly thoughtful. Vanessa, who’s left behind by Cara, is still supportive with a fun worldview. These characters cushion all the blows that come Cara’s and Julia’s way, creating a safe space for them to have this experience.

That being said, the book starts off very slow and deals mostly with Cara’s familial circumstances. While the other characters are dynamic, Cara’s dad isn’t presented with any redeeming qualities, and his reactions seem over the top and absurd. Because of that, he seems more of a caricature than a real person, which makes it harder to believe that Cara and Julia are devastated without him. Then, it takes a while to get Cara and Julia on the show and in the mix of that process, which is when it gets fun and engaging. Once there, though, the last third of the book flies by.

On a whole, ALL THE RIGHT REASONS is an easy read that will appeal to those who are fans of The Bachelor franchise. It gives readers a small peek behind the curtain and the chance to imagine how difficult it all is for the lead. This book is great for those searching for a sweet romance in an unconventional setting.

You are here: Featured Review: All the Right Reasons (Bethany Mangle)