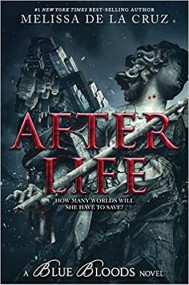 The Blue Bloods are back…more fanged and fabulous than ever.

After defeating Lucifer and sacrificing the love of her life, Jack, Schuyler wakes up back in New York safe and sound. Only it’s not quite the New York she knows, and she’s not in her regular body. She looks different and feels different and so does everyone else. Schuyler soon discovers that in this world, her best friend has a different last name, her parents are both alive and well and one of them is an entirely different person, and the love of her life? Not so dead after all. The catch? Jack has no idea who she is.

As it turns out, Schuyler is not in her New York. She’s not even in her universe. This is an alternate reality. One where Lucifer is alive and well and acting as mayor of New York, Blue Bloods are luring humans to clinics to drain their blood, and Jack is Lucifer’s right hand man. Just when she thinks all is lost, Schuyler is contacted by a familiar friend―the Silver Blood, Kingsley. The Kingsley from her world. He actually remembers the Schuyler she used to be! But he also has a theory, and it’s one she doesn’t like. That Schuyler was sent here to defeat Lucifer. Again. And that she’s the only person in this universe or any universe that can defeat him.

AFTER LIFE is a new Blue Bloods story that takes place in an alternate world. Schuyler wakes in New York after the fight with Lucifer, and she decides to head home only to find that it is not her home anymore. She soon realizes that this is not the world she knows, and here, Lucifer and Jack are both alive and well. Schuyler soon begins to realize that she was sent to this alternate reality for another showdown amidst this different world.

What I loved: This will appeal to fans of Blue Bloods who want another chance to play out this supernatural battle. The book does a great job of recapping the earlier facts so that readers who are not familiar or who haven’t read the earlier books in a while will be able to follow this easily. Favorite characters are back in new ways as this alternate reality has changed them in different ways. While Schuyler seems much the same in terms of motivation and disposition, those around her are reminiscent of themselves at core, but they have different motives and plots afoot. The use of multiple perspectives helps to tell the story in a fuller way, and the reader follows not only Schuyler but also Max (Mimi), Kingsley, and the others.

What left me wanting more: In some ways, this feels like a repeat of the earlier stories. The comparisons across the timelines are frequent, removing the reader from the story.

Of note for those who may be sensitive, this alternate reality takes place during a pandemic, during which everyone is avoiding crowds and wearing masks, though the illness differs in that it involves exsanguination.

Final verdict: AFTER LIFE is an intriguing new Blue Bloods story using an alternate reality premise. Would recommend for fans who want to enjoy familiar characters in this altered way.