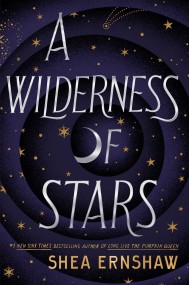 In this magical romance from the #1 New York Times bestselling author of Long Live the Pumpkin Queen, an illness cursing the land forces a teen girl astronomer to venture across the wilderness in search of the stars’ message that will, hopefully, save them all.
When all is lost, look to the stars.

Vega has lived in the valley her whole life—forbidden by her mother to leave the safety of its borders because of the unknown threats waiting for her in the wilds beyond. But when Vega sees an omen in the sky—one she cannot ignore—she is forced to leave the protective boundaries of the valley. Yet the outside world is much more terrifying than Vega could have ever imagined. People are gravely sick—they lose their eyesight and their hearing, just before they lose their lives.

But Vega has a secret: she is the Last Astronomer—a title carried from generation to generation—and she is the only one who understands the knowledge of the stars. Knowledge that could hold the key to a cure. So when locals spot the tattoo on Vega’s neck in the shape of a constellation—the mark of an astronomer—chaos erupts. Fearing for her life, Vega is rescued by a girl named Cricket who leads her to Noah, a boy marked by his own mysterious tattoos.

On the run from the men hunting her, Vega sets out across the plains with Cricket and Noah, in search of a fabled cure kept secret by the astronomers. But as the line between friends and protectors begins to blur, Vega must decide whether to safeguard the sacred knowledge of the astronomers…or if she will risk everything to try to save them all.

A WILDERNESS OF STARS is a thrilling YA sci-fi/dystopian. Vega has been raised as the Last Astronomer with a destiny passed down from generation to generation. After her mother’s death, Vega leaves the Valley where she has spent her life and ventures into the dangerous world to find the Architect. However, she must find this person with the knowledge that others in the world would harm her for looking.

The world is plagued by consumption that is killing everyone slowly. The area where Vega ventures into is controlled by a gang that prophesies about the end of the world and destroys anyone who stands in the way of what they want. Before too long, Vega finds Noah, who carries his own secrets and may be the person who can change her commitment to destiny.

What I loved: The big twist at the end of the book was phenomenal. While there is much heartbreak along the way, the book ends with a note of hope that turns it into something more powerful and emotional than originally expected. While the majority of the book seemed to be dystopian, it takes on some sci-fi elements that I found particularly intriguing.

There are themes around loyalty, destiny, family/found family, survival, grief, and the power of stories. These were thought-provoking throughout. Vega’s whole life has centered around a particular destiny of being the Last Astronomer, and she knows that she must fulfill the role she has been raised to fill. However, the ways that she must navigate this world are more complex than she anticipated, and Vega will need to rely on strangers that she knows she shouldn’t trust in order to accomplish her destiny.

Vega is a really compelling character. She’s an intriguing mix of naïve and knowledgeable. Her world has revolved around the stars and understanding the universe, but her life has been sheltered. She is trying to understand people while also finding someone elusive. She is clever and learns quickly from the world around her, with a shrewdness you might not expect for someone who was raised in a sheltered environment. Her journey is difficult but also becomes filled with love and hope.

What left me wanting more: The book feels rather slow at the beginning and requires some suspension of belief, particularly with the way some reveals happen so suddenly. When the reader begins to get a grasp on the world and landscapes, it suddenly shifts from under them.

Final verdict: A WILDERNESS OF STARS is an enchanting and compelling YA dystopian/sci-fi with unexpected twists. Recommend for fans of books with adventure/quests and a touch of romance.

You are here: Featured Review: A Wilderness of Stars (Shea Ernshaw)