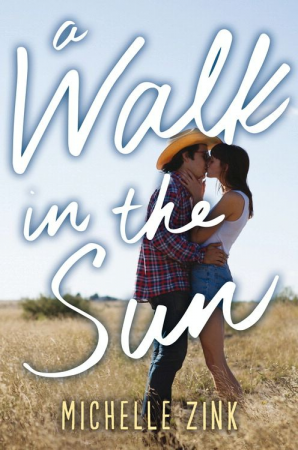 In this Bridges of Madison County for teens, Michelle Zink weaves a magnetic tale about summer love that stays with you long after the seasons change. Rose Darrow never wanted to spend her life working on her family’s farm. But when her family is rocked by an unexpected tragedy she has no choice but to put her plans for the future—and dreams of escaping her small town—on hold. Bodhi Lowell left home as a kid and hasn’t looked back. Years of working farm jobs has given him the one thing he wants most: freedom to travel without answering to anyone. He’s already looking past his job at Darrow Farm and plans on leaving in September—until he meets Rose. Neither Rose nor Bodhi can deny the sparks flying between them, but with the end of summer looming, they must decide if it is better to have loved and lost than never to have loved at all….

YA Contemporary, A WALK IN THE SUN is a sweet story of a girl who is grieving because of her mother’s death and a boy trying to escape a haunted past. It’s a massively entertaining and engrossing tale that starts with two paths and ends in one. Let’s dig in.

First of all, I have to point out the setting. My gosh, I have never known such things about living in a very rural area/small town. It’s nice to read the descriptions and it’s even nicer to be taken to a whole other place.

Rose Darrow is a girl going through the motions. Nothing is ever the same after her mother’s death, and her father is not coping well either. She is empty, cold, and different. Everything seems down and about until she meets Bodhi, who changes the entire dynamic of her home and her life. She lives again, and that is the main point of the story. To begin again and not just survive but also live. It is to believe that good things can happen again even after all the darkness.

And there is Bodhi Lowell. He is running from his past, and it is a terrible past at that. He’s trying to escape, and he finds good in Rose Darrow. Though Rose is the more prominent character of the duo, I find Bodhi much more easier to empathize and understand. He is, at first, an outsider peering into Rose’s life until he becomes a much larger part of it. Both characters change because of each other and their experiences, and they cling to each other. (So adorable those two characters are, by the way.)

The story unwinds slowly but steadily. The exposition provides a very nice opening to the book, and the tone of it is rather sorrowful (especially on Rose’s end but also on Bodhi’s). When the two characters meet, everything changes. It is as if a light has been switched on, and happiness, laughter, and all the good things in life comes into the book, and it’s a glorious shift in tone to read. Though the two characters go through internal drama, family drama, drama stemming from romance, and drama because of grief, they are stronger because of it. They are hopeful. And the change is well-written and absolutely exciting to read.

The romance brings together two people who are lost in their own ways. One, in grief. The other, in escapism (by traveling frequently and never looking back but not quite settling in one place). The pair have great chemistry, and I swear that I smile at certain moments and scare other people because of it. (“Why are you smiling at a book?” Because my OTP is adorable. “Wait, what? What’s an OTP?” One true pairing. “Huh?”)

The ending is a perfect conclusion to not just the story, the romance, but also the individual character arcs. I can’t end the book any better. This ending is so satisfying with all ends tied up and a HEA to boot.

Overall, A WALK IN THE SUN is a character-driven story that starts with melancholy and ends with the most important thing of all: hope. This is for anyone who loves a story of moving on but also never forgetting the ups and downs of life.

You are here: Featured Review: A Walk in the Sun by Michelle Zink