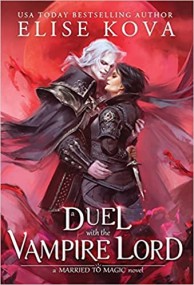 On the night of the blood moon, the Vampire Lord must die.

Floriane’s position as the forge maiden of Hunter’s Hamlet is one of reverence, for it is her skill that arms and protects the vampire hunters. She knows her place and is a faithful servant to the Master Hunter and her community… until the night of the blood moon. Until her brother is dying at the hands of the Vampire Lord Ruvan.

Wanting to defend her home at all costs, Floriane fights the vampire lord, ready to give her life if it means taking his. But Ruvan doesn’t want to take her life… he wants her.

Kidnapped and brought to the vampire castle, Floriane is now blood sworn to the vampire lord. She is bound in mind and body to her worst enemy. But Ruvan isn’t the fiend she thought he was. She learns the truth of the vampires: They are not mindless monsters, but a proud people, twisted and tortured by an ancient curse.

Ruvan believes that Floriane might be the key to ending his people’s suffering. All Floriane wants is to defend her home. Loyalties are tested and the line between truth and lie is blurred.

When her dagger is at his chest, will she be able to take the heart of the man who has claimed hers?

A darkly-reimagined Snow White meets inspiration from Beauty and the Beast in an epic fantasy world of hunters, vampires, and curses that run deeper than blood. This stand alone is complete with a “happily ever after” ending. It’s perfect for fantasy romance fans looking for just the right amount of steam and their next slow-burn and swoon worthy, enemies to lovers story.

While it is set in the Married to Magic universe, readers can start with this book.

A DUEL WITH THE VAMPIRE LORD is a fast-paced new stand-alone installment in the Married to Magic series. Floriane is the forge maiden of Hunter’s Hamlet, the small town that exists to protect the rest of the human world from the vampires that come through every full moon. The book begins just before the blood moon, a phenomenon that happens every 500 years when the Vampire Lord leads his army through the veil. If he should be killed, it is said that the scourge would end forever.

This year, Floriane’s twin brother is convinced that he can end it once and for all, as one of the lead Hunters in the town. As the forge maiden, Floriane’s duty from birth has been to learn how to craft the weaponry that will allow them to destroy the vampires who come through. Now that she is 19, she will be assigned a spouse by the Head Hunter to bear heirs to pass the knowledge onto, as part of her duty to the town. On this night of the blood moon, her brother has snuck her a vial of Hunter’s Elixir. Though it is forbidden to anyone but hunters, it gives the person who drinks it extra strength to fight the vampires. She is to use it to protect herself and their mother.

On the night of the blood moon, Floriane is determined to survive and drinks the elixir before she follows her brother’s cries to see the Vampire Lord destroying him. She fights with him, and he captures her, taking her into their realm. There, Floriane becomes bloodsworn with him as they seek to undo the curse placed upon the vampir, and she begins to learn that all the things she thought she knew about the vampir are distorted by a human lens, with the truth being far from simple.

What I loved: This book tackles some important themes around ethical perspectives and the need for empathy. Vampir and humans have been fighting for thousands of years, and both sides see the devastation that has been wrought. However, when Floriane begins to work with Ruvan, she starts to understand how humans do not have the whole picture and that nothing is a simple as she had been led to believe. It is her empathy that begins to undo the conditioning against vampir with which she has been raised. The need to see and understand both sides is what ultimately leads to resolution of the conflict (though, of course, with some magical twists).

The book is told from Floriane’s perspective, and she is a really compelling character. Her life has been limited by her role in society, and she wants more from it than just to be a tool of humanity. The forge maiden is always set apart and her marriage decided for her, but she dreams of choosing her own match and falling in love. On this journey, she begins to find herself, her wants, and embrace herself as she is, outside of Hunter’s Hamlet. I appreciated her coming-of-age style arc. Ruvan is also a really interesting character, and his understanding and passion really endears him to the reader, though it takes longer for he and Floriane to get their act together. His covenant were also characters that really grow on the reader, and I loved getting to know them.

The plot is really fast-paced with a lot more fighting than in previous books, mostly due to the nature of the vampir/human relations (or lack thereof). The romance sneaks up slowly on the reader and feels like a natural build, while the main plot is around the curse and the necessity of breaking it. I think this will appeal more to fantasy vs romance readers for that reason, but I really enjoyed the fantasy focus!

Other intriguing themes around the the unique magic that we each carry, revenge, and the morality of magic as it can be twisted by the user were also really thought-provoking and great for a fantasy audience. A unique element in the book is around the inclusion of the dreams that Floriane begins to have, and I appreciated these interludes as well as the way that they build in the story. Ultimately, the ending was highly satisfying and took some very unexpected twists along the way that I really enjoyed.

Final verdict: An enthralling and thought-provoking fantasy romance, A DUEL WITH THE VAMPIRE LORD is sure to enchant readers with a compelling romance, intriguing themes, and unforgettable characters. Highly recommend for fantasy readers who love a touch of romance, surprising twists, and stand-alone stories.

Wait For Me
Unsolved Case Files: The 500 Million Dollar Heist: Isabella Stewart Gardner and Thirteen Missing Masterpieces (Unsolved Case Files, 3)
Squad Up (A Power Up Graphic Novel)
The Black Slide
Shot Clock (Shot Clock #1)
What We Saw: A Thriller
The Legend of the Lost Boy (The Pathfinders Society #3)
Nothing Interesting Ever Happens to Ethan Fairmont
Who Was Che Guevara?
Who Was Celia Cruz?
Sometimes Love
Undercover Latina (The Factory)
Arab Arab All Year Long!
Peace Is a Chain Reaction: How World War II Japanese Balloon Bombs Brought People of Two Nations Together
It's a Numbers Game! Football
Sandor Katz and the Tiny Wild (Food Heroes, 4)
The Harvey Milk Story
Bottle Tops: The Art and Life of El Anatsui
Indelible Ann: The Larger-Than-Life Story of Governor Ann Richards
Outside, You Notice
Cocoa Magic
The Power of Architecture: 25 Modern Buildings from Around the World
I Am Coco: The Life of Coco Chanel
Amy Wu and the Warm Welcome
Katie and the Cupcake Cure The Graphic Novel (1)
Meet Me Halfway
Hippos Go Berserk!: The 45th Anniversary Edition
Elephant's Big Solo
One Sky
Me and You in a Book Made for Two

You are here: Featured Review: A Duel with the Vampire Lord (Elise Kova)