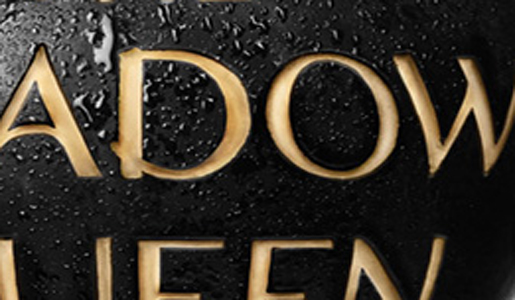 YABC is super excited to host the exclusive sneak peek of C.J. Redwine’s upcoming THE SHADOW QUEEN (Balzer + Bray 2/23/16), and epic fantasy retelling of the Snow White fairy tale. The cover was first revealed on EPIC READS, along with 4 other EPIC covers. (Check those out HERE)

First, let’s hear from C.J. about the inspiration behind writing this book.

Hi YABCers! I’m so excited about this book (about the series, really). I was raised on fairy tales. Every week I checked out another volume of Grimm’s fairy tales from the library. (Anyone remember the white book, yellow book, red book etc?) I get excited every time another live action or animated fairy tale hits the big screen because there’s nothing I love more than a good retelling. However … not all retellings are created equal. 🙂 The inspiration for THE SHADOW QUEEN actually came from the incredible disappointment I felt after seeing Snow White and the Huntsman. I ranted for the 45 minute drive home, and finally my husband looked at me and said, “Why don’t you write the story how you want it to be told?”

I wanted Snow White to be an epic battle between two equally powerful females. I wanted the huntsman to have compelling reasons for obeying the queen and to be deeply conflicted. I wanted the prince to fall in love with the princess because of her courage, her intelligence, and her heart, not because he stumbled upon a random corpse in the woods and decided to kiss it. (I mean really.)

So that’s what I wrote. And I’m so very grateful to Sarah Kaufman, my cover designer at Balzer + Bray, for giving me such a captivating cover! I hope you love the cover and the story as much as I do.

Are you ready to meet THE SHADOW QUEEN? Scroll to see the cover and read an exclusive excerpt, and be sure the enter the giveaway for the first advanced review copy!

Lorelai Diederich, crown princess and fugitive at large, has one mission: kill the wicked queen who took both the Ravenspire throne and the life of her father. To do that, Lorelai needs to use the one weapon she and Queen Irina have in common—magic. She’ll have to be stronger, faster, and more powerful than Irina, the most dangerous sorceress Ravenspire has ever seen.

In the neighboring kingdom of Eldr, when Prince Kol’s father and older brother are killed by an invading army of magic-wielding ogres, the second-born prince is suddenly given the responsibility of saving his kingdom. To do that, Kol needs magic—and the only way to get it is to make a deal with the queen of Ravenspire, promise to become her personal huntsman…and bring her Lorelai’s heart.

But Lorelai is nothing like Kol expected—beautiful, fierce, and unstoppable—and despite dark magic, Lorelai is drawn in by the passionate and troubled king. Fighting to stay one step ahead of the dragon huntsman—who she likes far more than she should—Lorelai does everything in her power to ruin the wicked queen. But Irina isn’t going down without a fight, and her final move may cost the princess the one thing she still has left to lose.

“You cannot outrun me.” Irina’s voice echoed down the street. “You cannot hide from me. You can either surrender or die.”

“Your Highness, the dragon needs a scent to follow,” a man said.

“I don’t need a hunter to follow a scent when my prey is so close. I can find them myself.”

“Ready?” Leo whispered as he nodded toward a narrow iron catwalk that bridged the distance between the alley-side corner of the smithy and the brewery next door.

“Ready.” Taking a deep breath, she found her balance and ran lightly down the sloping roof, onto the iron catwalk, and across to the brewery’s roof in seconds.

The catwalk creaked behind her, and then Leo was behind her. Moving quickly across the brewery’s roof, staying low and hugging the chimneys for cover. Lorelai followed, her stomach churning as Irina’s voice echoed across the alley below them.

A light as brilliant as fire shot into the air, arced, and then plunged deep beneath the alley’s cobblestones.

Lorelai’s palms blazed with heat in response. She grabbed Leo’s hand and yanked him forward, their boots sliding dangerously against the brewery’s shingles as they fought to get to the next catwalk.

“Nakhgor,” Irina shouted as the cobblestones shook violently. “Find the ones I seek.”

Lorelai and her brother reached the catwalk that led to the harness maker’s workshop as long jagged cracks split the cobblestones beneath them.

Sprinting across the catwalk, Lorelai scrambled up the harness maker’s roof and half-slid down to the other side, Leo right at her heels.

“Kaz`prin.” Irina’s voice filled the air. The cobblestones cracked and crumbled as her spell gained strength. “Bring them to me to face their punishment.”

Lorelai was halfway across the catwalk that led from the harness maker’s to the weaponsmith’s when a score of thick black vines exploded out of the ground. 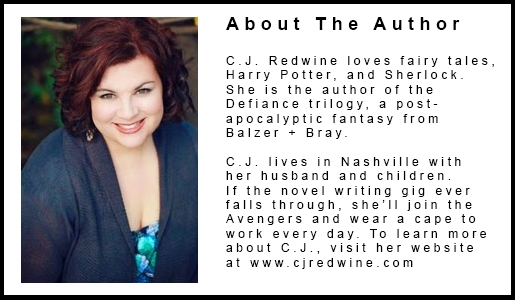 One winner will receive an ARC of THE SHADOW QUEEN (when available).

You are here: Exclusive Sneak Peek at THE SHADOW QUEEN by C.J. Redwine + Giveaway (International)