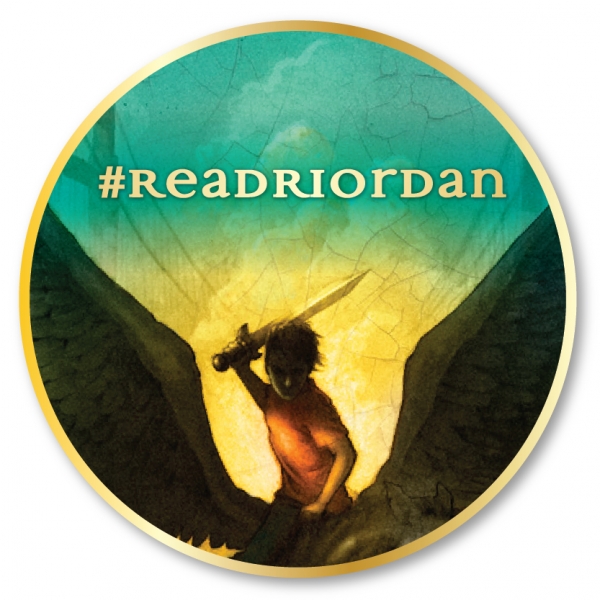 With Percy Jackson’s birthday just days away and the release of the newest book, Percy Jackson’s Greek Heroes also set for August 18th, there is so much to celebrate! With the help of Disney-Hyperion, I get to discover the magic of Camp Half Blood and beyond and now I’m sharing the magic and more with all of you!

I recently received my second “Presents from Percy,” package (even though it’s Percy’s birthday and not mine)! 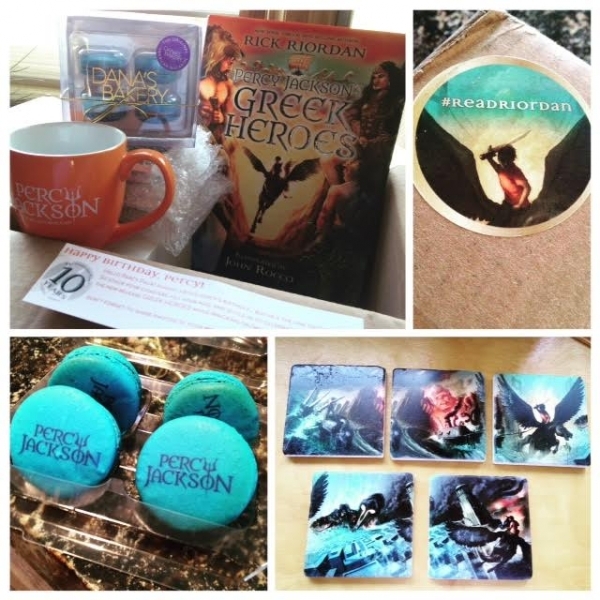 Inside, I found a new Percy Jackson mug, a gorgeous set of Percy coasters depicting the covers of the books, delicious macaroons from Dana’s Bakery, and an early copy of Percy Jackson’s Greek Heroes! Disney-Hyperion and Percy really sent a selection of items fit for a Greek hero!

Of course I couldn’t wait to sit down with this behemouth book and find some of my favorite Greeks between the pages! 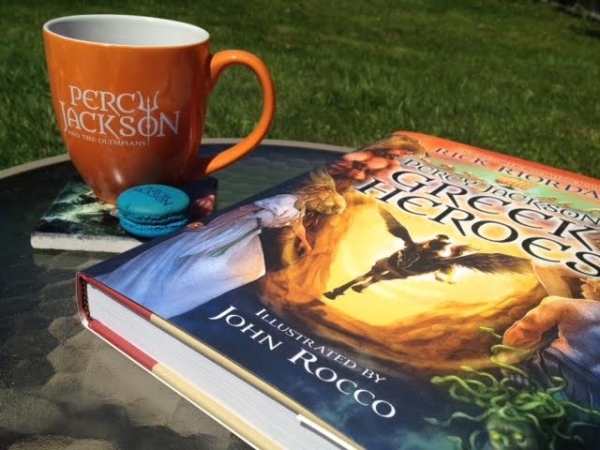 With a cup of tea and a macaroon on my new coaster, I prepared myself for this long awaited companion to the Percy Jackson series. And it didn’t disappoint. Told with the same wit and fantastic humour as Greek Gods, this book offered so many stories I instantly fell in love with! 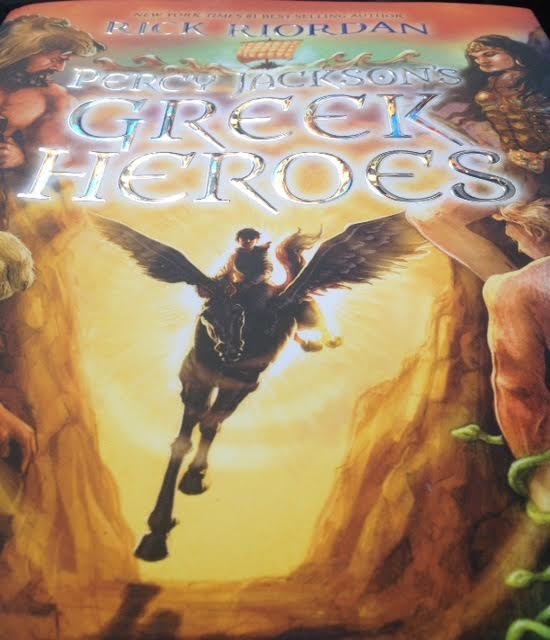 Even the lettering on the cover shimmers with what must be some magical substance ready to beckon readers into the depths of its pages!

And from those first few pages, I discovered a map, which every fantasy lover knows is the key to a really great book! 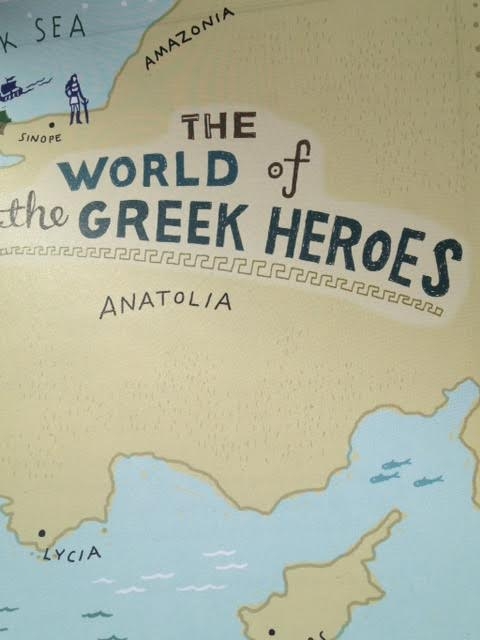 I perused the table of contents to choose my first story and I discovered the name Orpheus. Now maybe, for some readers, this would not be quite as enticing. After all, it is a strange Greek name like many of the others within this book. But, the story of Orpheus and Eurydice happens to be my favorte Greek myth so I was thrilled!! 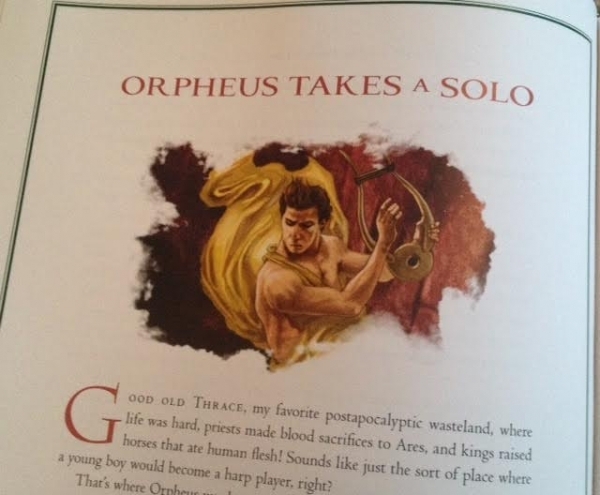 The story did not disappoint. Instead I found a wonderful collection of humour and unavoidable sadness that comes with talking about the tragedy that befalls young Orpheus and Eurydice. Don’t worry, I won’t spoil the details of that tragedy. Just know, it’s Greek, so there are probably some tears waiting to be shed.

Throughout the book, there are beautiful and haunting illustrations. The one done for Orpheus really captures the emotion in the story. Even the water is so detailed that it actually looks like there is some kind of light dancing on its surface. 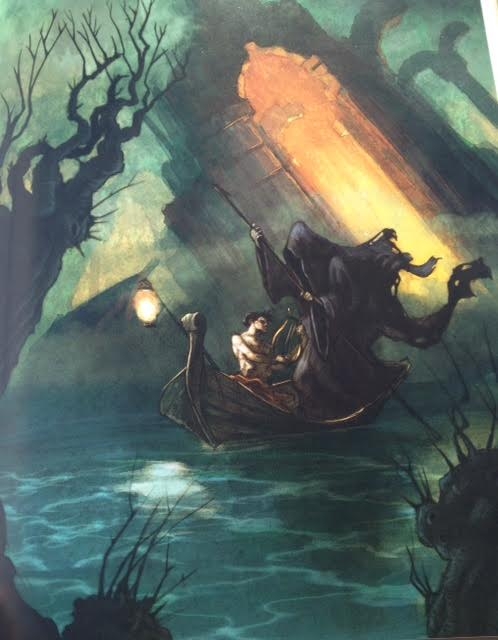 Amazing, right? Fortunately, there are illustrations for EVERY story within this book. I’m sure the first thing you’ll want to do when you get your copy is stay entranced in these beautiful images, but I promise, all of the stories are just as mesmerizing. Just when it seemed like too many years between the debut of that first Percy Jackson book, Rick Riordan has stopped that magic from fading by delivering with another fantastic book!

So what are you waiting for? Pre-Order your very own copy of Percy Jackson’s Greek Heroes today, and read below for a chance to win your own kind of “Percy Pack,” from Disney-Hyperion! 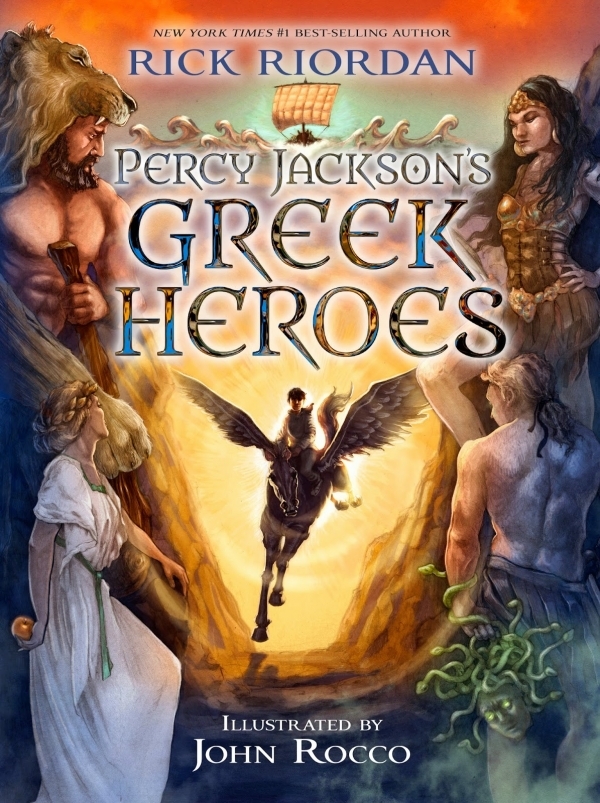 Description: Who cut off Medusa’s head? Who was raised by a she-bear? Who tamed Pegasus? It takes a demigod to know, and Percy Jackson can fill you in on the all the daring deeds of Perseus, Atalanta, Bellerophon, and the rest of the major Greek heroes.

Told in the funny, irreverent style readers have come to expect from Percy, ( I’ve had some bad experiences in my time, but the heroes I’m going to tell you about were the original old school hard luck cases. They boldly screwed up where no one had screwed up before. . .) and enhanced with vibrant artwork by Caldecott Honoree John Rocco, this story collection will become the new must-have classic for Rick Riordan’s legions of devoted fans–and for anyone who needs a hero.

So get your flaming spear. Put on your lion skin cape. Polish your shield and make sure you’ve got arrows in your quiver. We’re going back about four thousand years to decapitate monsters, save some kingdoms, shoot a few gods in the butt, raid the Underworld, and steal loot from evil people. Then, for dessert, we’ll die painful tragic deaths. Ready? Sweet. Let’s do this.

One winner will receive a copy of Percy Jackson’s Greek Heroes and a Percy Jackson backpack! Open to US addresses only. Prizing provided by Disney-Hyperion. Let us know which Greek hero is your favorite in the comments below! 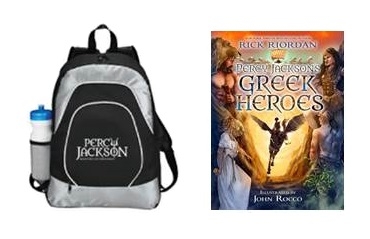 Stay tuned for more Percy Jackson posts as we celebrate the last decade and embark on the years to come with Percy and all our friends from Camp Half Blood!

You are here: Discovering Greek Heroes and More!