Today we're excited to chat with Alexandria Rizik author of 21 Questions!  Read on for more about Alexandria, her book, plus an giveaway!          Meet  Alexa...
Posted in News & Updates
Read more

YABC is thrilled to be hosting a spot on the DANGEROUS PLAY by Emma Kress Blog Tour hosted by  Rockstar Book Tours . Check out our post and make sure to enter the giveaway! About the Books: Title...
Posted in News & Updates
Read more

About This Book: Courtney Gould’s thrilling YA debut The Dead and the Dark is about the things that lurk in dark corners, the parts of you that can’t remain hidden, and about finding home in places―an...
Posted in News & Updates
Read more

Hello YABC'ers! Welcome to the weekly post by the Staff at YA Books Central called Current Reads Monday! We love everything bookish and just wanted to share with our readers what books we are currentl...
Posted in News & Updates
Read more

About This Book: This harrowing, and ultimately hopeful novel in verse sensitively depicts a girl's journey through the aftermath of abuse. One day after school, on the couch in the basement, Tori's u...
Posted in News & Updates
Read more

There are several ways to get started: 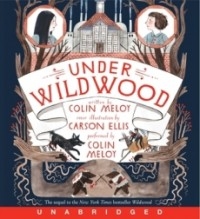 Ever since Prue McKeel returned home from the Impassable Wilderness after rescuing her brother from the malevolent Dowager Governess, life has been pretty dull. School holds no interest for her, and her new science teacher keeps getting on her case about her dismal test scores and daydreaming in class. Her mind is constantly returning to the verdant groves and sky-tall trees of Wildwood, where her friend Curtis still remains as a bandit-in-training.

But all is not well in that world. A hard winter has come and discord reigns in the wake of the so-called Bicycle Coup. Dark assassins with mysterious motives conspire to settle the scores of an unknown client. A titan of industry employs inmates from his orphanage to work in his machine shop, all the while obsessing over the exploitation of the Impassable Wilderness. Under a growing threat, Prue is drawn back into Wildwood, where she and Curtis will face their greatest challenge yet: to save themselves and the lives of their friends, and to bring unity to a divided country. But in order to do that, they must go under Wildwood. In Under Wildwood, Colin Meloy and Carson Ellis reveal new dimensions of the epic fantasy-adventure series begun with the critically acclaimed, bestselling Wildwood.

Meloy's Time Would Be Better Spent on His Music
November 13, 2012 (Updated: November 13, 2012)
Overall rating
2.0
Narration
2.0
Plot
N/A
Pacing
0.0
Characters
0.0
Wildwood was only just okay for me, but, because of my love of Colin Meloy's music, I determined to give his books one more chance. I like to be open-minded about my reading, but, sometimes, certain authors just don't resonate. Colin Meloy makes beautiful music, with lyrics that tell a marvelous story, but his efforts in fiction seem to me too be trying to hard and not aimed at the right audience.

Once again, I feel the need to clarify that I think these books are marketed to entirely the wrong age group. According to Amazon, these books are for ages 8+. Well, that just does not seem right to me at all. The writing is complex and the subject matter seems like it would alternatingly bore and frighten and eight year old. Certainly, there are children or teens that might enjoy this, but, on average, I think this book would make them feel rather stupid. I mean, heck, there are even words I don't know, and that doesn't happen often to me in pretty much any book. On the bright side, if you're looking for interesting SAT prep materials, this might help with the verbal section.

As I noted in my review for Wildwood, some reviewers, disappointed like I was, said that it read as though Meloy wrote the book with a thesaurus in hand. Personally, I didn't feel like that, but, when the option to review the audio came around, I took it, curious to see how it would sound. Clunky language of the overblown variety really stands out when it comes time to read it aloud. Having listened to Meloy narrating his own novel, I stand by my prior assertion: I think he just has an awesome vocabularly and loves big words.

For the most part, I don't see this book really taking off to much except in hipster circles. The villain of this one is a captain of industry, a maker of machine parts. Unthank also runs a home for orphans. If you guessed child labor, then you're right! I don't like corporations any more than the average person, but I find it highly unlikely that a corporation could get away with such flagrant child labor in the US in this day and age, particularly if it's one of the biggest corporations. I mean, come on, there would be people sent in to check out his factory AND to observe the treatment of the children. Perhaps this could be explained, but no reasons for this were given, so I'm calling bullshit. Also, if this book is for kids, I could maybe see them creeped out in a good way about the child labor, but all of the meetings between the captains of industry and belaboring of the anti-corporate message? I doubt it.

There's also a weird, incongruous scene in which Prue and Curtis see some litter. The litter had no effect on the plot whatsoever really, but there's a discussion of it. Why? Because the piece of litter is a can of PBR (Pabst Blue Ribbon). As I said, this book is for hipsters. There's absolutely no reason to have the can be beer (or a specific type of beer) unless the target audience is people who drink beer, especially hipster beer.

Aside from that, I have the same complaints that I did the first time around: static characters, unrealistic dialogue and perhaps too much violence for a middle grade audience. Sure, the violence in the book does not phase me, as I read a lot of dystopian and post-apocalyptic fiction. However, if I were a kid who'd mostly read children's books, I'm pretty sure this would freak me out. Prue obtains some pretty ghastly injuries, animals kill one another, children fight with glee, and we learn that two characters were tortured in the past, one losing his eyes and the other his hands. It just all felt a bit excessive for an eight year old.

Basically, if you're an adult and you're interested in this, by all means. If you think your kids would like it, great, but just be aware that it's more mature than perhaps implied. I do not plan to continue with this series, sadly, but highly recommend checking out The Decemberists if you haven't heard them before.

Christina Franke, Staff Top 10 Reviewer 677 reviews
Report this review Comments (0) | Was this review helpful to you? 2 0