About This Book: SHE HAS RENEGADE MAGIC – AND THAT WILL COST HER EVERYTHING. Aella is the most relentless, determined seventeen-year-old in the Winged Empire’s newest settlement so of course when she ...
Posted in News & Updates
Read more

Today we're excited to chat with John David Anderson author of Stowaway!  Read on for more about John, his book, plus an giveaway!          Meet  John David A...
Posted in News & Updates
Read more

About This Book: New York Times bestselling author of The DUFF Kody Keplinger and artist Sara Kipin reimagine an iconic DC antihero with a gothic-horror twist. There's something unusual about Pamela I...
Posted in News & Updates
Read more

Waiting on Wednesday is a weekly event that is hosted by Jill at Breaking the Spine and spotlights upcoming releases that we're eagerly anticipating.     *Connie’s Choice* (YABC Site Manager...
Posted in News & Updates
Read more

Today we're excited to chat with Alexandria Rizik author of 21 Questions!  Read on for more about Alexandria, her book, plus an giveaway!          Meet  Alexa...
Posted in News & Updates
Read more

There are several ways to get started: 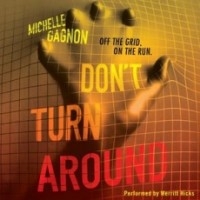 Sixteen-year-old Noa has been a victim of the system ever since her parents died. Now living off the grid and trusting no one, she uses her computer-hacking skills to stay safely anonymous and alone. But when she wakes up on a table in an empty warehouse with an IV in her arm and no memory of how she got there, Noa starts to wish she had someone on her side.

Enter Peter Gregory. A rich kid and the leader of a hacker alliance, Peter needs people with Noa’s talents on his team. Especially after a shady corporation threatens his life. But what Noa and Peter don’t realize is that Noa holds the key to a terrible secret, and there are those who’d stop at nothing to silence her for good.

Listening to a book on audio, I've learned, can often make or break your reading experience. A good narrator can bring life to otherwise flat characters and create interest where you might otherwise have little. A bad narrator can make you hate a book you would have loved. While I've really been enjoying them, sometimes they're a bad choice. This one, though, thankfully, falls into that former category where the audiobook enhanced my reading experience.

The blogosphere buzzed about this book after the cover reveal, and I just couldn't decide whether I had any interest. The description didn't grab me and I'm really not much of a thriller reader, unless the genre is dystopian or post-apocalyptic. The series title intrigued me, because mythology, but I wasn't really seeing any sign of actual mythology anywhere (that's because there's not).

Trying to evaluate the novel itself, I think it is for the most part fairly standard action fare, although with more of a focus on cerebral warfare than physical. Most of the bodily action involves running and escaping, rather than fighting. The real battles take place with computers and coding: nerd battles. I really liked that, even though the whole computer hacking angle wasn't of any interest to me when I read the blurb. Also, I am always pleased when the strength the characters show for survival isn't necessarily physical but mental.

The opening scene with Noa in the hospital is confusing and dramatic and an awesome hook. You want to know what's going on with her for sure. Also, PEMA, a new, horrific disease that kills teenagers is creepy and seriously interesting. You know I'm a sucker for dark futures and evil organizations!

The characterization struck me as a bit weak. Noa has definite badass tendencies, and I really like the way she calmly faces danger. Unfortunately, after they spend a bit of time together, she starts acting like a doofus around Peter, which seems sort of out of character for her. More on that later. Peter rocks the whole 'poor little rich boy' angle without being too obnoxious, mostly because his acting out is hacking rather than drugs and alcohol. They're okay, and I root for them more than the other people, but I'm not overly attached to them.

I would have liked them more if it weren't so obviously setting up a future romance for them. There's really not much romance in this book, but, despite an uninspiring first encounter, they begin making googoo eyes at one another pretty quickly. Considering that he just broke up with his serious girlfriend, I thought that was in pretty poor taste. Even worse, there's another guy on the horizon for Noa, which means inevitable love triangle, and one I'm not getting good vibes from.

The character I do love: Cole. He is so sweet and I loved his relationship with Peter's brother, and his subsequent support of Peter. There was one character that I could not stand: Amanda. She's Peter's girlfriend, a year older and now in her first year of college. They bonded over their dead brothers (hers from a life of excess, his from PEMA), but have been drifting apart since she went to college. She bores me, and I was frustrated every time the narration followed her, which, thankfully, was not frequently.

I loved listening to Merritt Hicks' voice and made excuses to myself for why I needed to do particular activities that I could perform while listening to an audiobook. She's got sort of a deep voice, calm, with a bit of a cynical tilt to it. Obviously, though, with narrators, you either like them or you don't. She reads pretty steadily, and doesn't show as much emotion as some or go as theatrical with the voices. It worked for me though, and I will be keeping an eye out for more of her narrations.

My only complaint about the audio version is that the POV changes aren't handled well. When the third person narration switches from Peter to Amanda to Noa, it happens abruptly, as in without a longer than usual pause. Every time, I had to reorient myself, startled.

Despite that one weakness, I highly recommend the audio of Don't Turn Around, and plan to listen to the rest of the series. Hopefully, Merritt Hicks will narrate those as well.

Stephanie Wyatt, Staff Reviewer
"I always love stories that flip gender roles. I feel like there is a character for every type of personality..."

Stephanie Augustine, Staff Reviewer
"Once again, Cait has done it. I love that it is so easy to boost her works when she does..."

Beth Rodgers, Staff Reviewer
"‘The First Holidays’ by Cait Marie is a sweet story of friendship and love. Readers will feel the warmth between..."

Stephanie Augustine, Staff Reviewer
"I've honestly had my eye on this book for a while, and finally decided to pick it up. As the..."

Bethany Wicker, Listings Manager & Staff Reviewer
"When Aislinn and Catriona are taken into the fae realm, their fate falls into the hands of a broody prince/rightful..."

With Shield and Ink and Bone
4.8