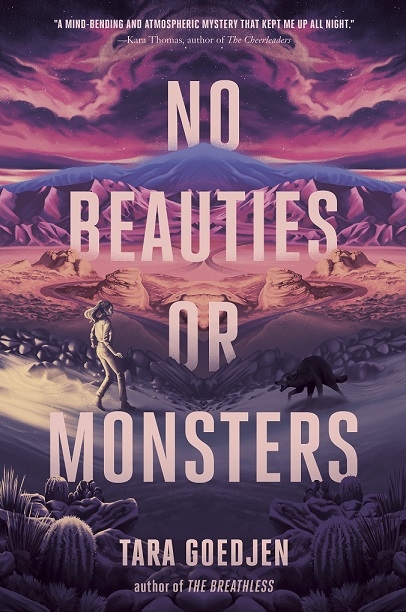 Today we’re spotlighting No Beauties or Monsters by Tara Goedjen!

Read on for more about Tara and an exclusive except from No Beauties or Monsters!

Tara Goedjen never stays in one place for long. She has worked as a fiction editor in Australia, as a tennis coach in Spain, and she wrote her latest YA book, NO BEAUTIES OR MONSTERS, on the island of Guam and in the desert of New Mexico. She currently lives with her family in a rainy corner of Washington, where she loves writing about anything mysterious. To find out more about Tara’s novels, follow @TaraGoedjen on Instagram or say hello at taragoedjenauthor.com.

Rylie hasn’t been back to the military base in Twentynine Palms since her father died. She left a lot of memories out there, buried in the sand of the Mojave Desert. Memories about her dad, her old friends Nathan and Lily, and most of all, her enigmatic grandfather, a man who cut ties with Rylie’s family before he passed away. But her mom’s new work assignment has sent their family to Twentynine Palms again, and now, Rylie’s in the one place she never wanted to return to.

The bees are gone, but Ethan’s knife isn’t. It’s clean from last time and tucked under his bed. Other sleeping bags are in the room—the kid his age is sprawled out on one of them—but everyone else is at morning chores. Today Ethan’s chore was the beehive. The bees had left, vanished completely, and it scared him enough to send him inside.

But even inside there are too many windows and doorways. All the openness makes it hard to think. He needs to hurry; he can feel them coming. He needs—what? The beekeeping veil is hot and he yanks it off, then glances outside. It’s still dark—the sun hasn’t risen yet. That’s when they like to come.

Ethan hauls up his bag; he has water in it, food. Enough to give him some time until it’s all clear. And then he’ll come back and sleep next to the others and do his chores, and he’ll be happy with that, even if it’s his turn to scrub toilets. But now he has to hurry.

He shoves the last of the broken pill into his mouth, choking down the bitterness as he grabs his phone and the card. A tiny hexfoil’s on it, a number to call for help.

He starts to dial, but the phone slips. He’s sweating again; sweat’s beading over his arms and legs. There’s a sound at his ears like rushing water, a tap turned on full blast. Then something slams against the door and the other kid in the room startles, sitting up.

When Ethan rolls over and opens his eyes, he sees the bruising on his arms, over his hands. The sleeping bag next to him is empty. There’s blood on the floor.

Another one. Ethan’s stomach heaves, but nothing comes up. They’ll lock him away again.

He gets to his feet. He grabs his backpack, his knife. The beekeeping veil and gloves. To keep himself calm he recites the name. Caruso. Caruso. Then he shoves everything into his bag and heads to the door.

There’s nowhere to go except into the desert.

“Our turn,” Rylie says. She nudges the jeep up to the guard post. A sign’s hanging from the new razor wire fence: vehicle checkpoint, twentynine palms. The name sounds tropical, but it’s a lie–Twentynine Palms is a Marine Corps base surrounded by desert. A lot of desert.

“Here.” Rylie holds out their IDs for the guard. He scans their cards but doesn’t open the gate. Instead, he turns on a flashlight and aims it at the jeep.

“We’re with my mom, Major Caruso,” Rylie says. “In the U-Haul that just went through? She was assigned–”

“Got it.” The guard’s flashlight hits her in the face, and she blinks, her eyes burning. A second later it’s on Ben. Her stepdad’s sitting too straight in the passenger seat, his tracksuit sleeves pushed up to his elbows, his forearms flexing. Behind him, Owen’s holding down a growling Castle, their rescue terrier.

“He’ll be fine,” she whispers back. This time they’ll all be fine. She glances at the guard–he’s taking too long. “How come there’s a checkpoint here? We’re not even at the base yet.”

“Heightened security. It’s temporary.” He clicks off his flashlight. “You’re all clear.”

She wants to ask more, but it’s probably better just to keep driving. The gate swings outward, and she quickly accelerates–following her mom, just like always. Because no matter what they’re heading into, they have each other. A triangle has strength, her mom used to say. Me, you, Owen, she’d say. We’re strong. But they aren’t a triangle anymore, and they’re going straight into the one place Rylie never wants to see again.

You are here: Check out this Exclusive Excerpt from No Beauties or Monsters (Tara Goedjen)!