I've been working with Chris for a long time now, preparing for this cover reveal, and I've been on pins and needles waiting to see the final cover. It finally arrived in my inbox this morning and...

First off, here's a little note from Chris:

Hi YABC! And welcome to the exclusive cover reveal for ROOTLESS!

I'm so excited to share with you the cover for my debut novel, ROOTLESS. I'm totally blown away by the artwork, and so grateful to everyone at Scholastic who was involved. Lots of people to thank, but in the end, I have to give it up to Mr. Phil Falco. He's the artist behind this cover, and his work is now forever matched with mine! Such an honor! Check out more about the book below. And enjoy the video introducing ROOTLESS, which I'm also unveiling for the first time today! We made it for my new website, that's going to be online next month and will offer contests and plenty more sneak previews of the book.

Doesn't it sound AMAZING? This book has my name written all over it.

Now, take a look at the slick cover Scholastic designed for ROOTLESS: 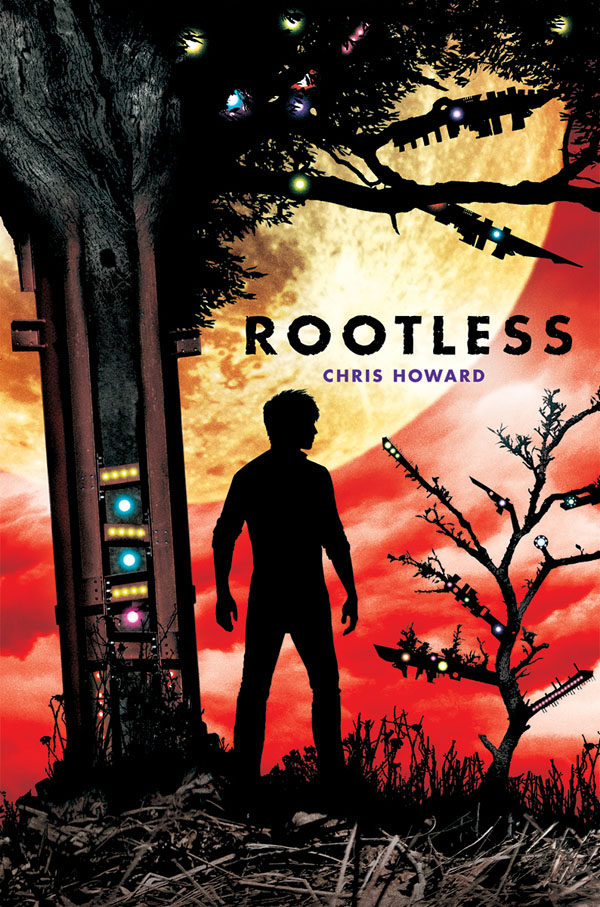 "There aren't many books left. People burned most of them to keep warm during the Darkness. And after the Darkness, there were no new books because there was no more paper.

The locusts had come.

And there were no more trees."

Seventeen-year-old Banyan is a tree builder. Using scrap metal and salvaged junk, he creates forests for rich patrons who seek a reprieve from the desolate landscape. Although Banyan's never seen a real tree‚ they were destroyed more than a century ago‚ his father used to tell him stories about the Old World. But that was before his father was taken . . .

Everything changes when Banyan meets a woman with a strange tattoo‚ a clue to the whereabouts of the last living trees on earth, and he sets off across a wasteland from which few return. Those who make it past the pirates and poachers can't escape the locusts‚ the locusts that now feed on human flesh.

But Banyan isn't the only one looking for the trees, and he's running out of time. Unsure of whom to trust, he's forced to make an uneasy alliance with Alpha, an alluring, dangerous pirate with an agenda of her own. As they race towards a promised land that might only be a myth, Banyan makes shocking discoveries about his family, his past, and how far people will go to bring back the trees.

In this dazzling debut, Howard presents a disturbing world with uncanny similarities to our own. Like the forests Banyan seeks to rebuild, this visionary novel is both beautiful and haunting‚ full of images that will take permanent root in your mind . . . and forever change the way you think about nature.

Make sure to put this one on your TBR list and mark your calendar! ROOTLESS comes out this November.

Until then, you can find out more about ROOTLESS and Chris here: