Today we are so thrilled to be a part of the STORMDANCER cover reveal for author, Jay Kristoff. But before we get to the awesome that is the cover, here's a little note we got today about the reveal:

Hello YABC! Welcome to the cover reveal for STORMDANCER!

The author Jay Kristoff would have liked to be here to tell you all about it, but his head exploded from an overdose of awesome when he first opened the file and paramedics are currently trying to revive him. Jay’s valiant Jack Russell terrier Samwise (yes, he named his dog after a LotR character – he is a terrible nerd) may also have run off with his tiny brain and buried it somewhere in the garden. If he were here, Jay would probably just wave his arms about and say “OMG LOOK AT THE PRETTYYYYY” a lot. Who needs to see that? He actually had very little to do with how awesome the cover turned out anyway, and just because his name is on it shouldn’t mean he gets to bask in all the glory now that it’s out in the big wide world. So there.

I don't blame Jay for the head explosion thing because seriously: LOOK AT THE PRETTY! 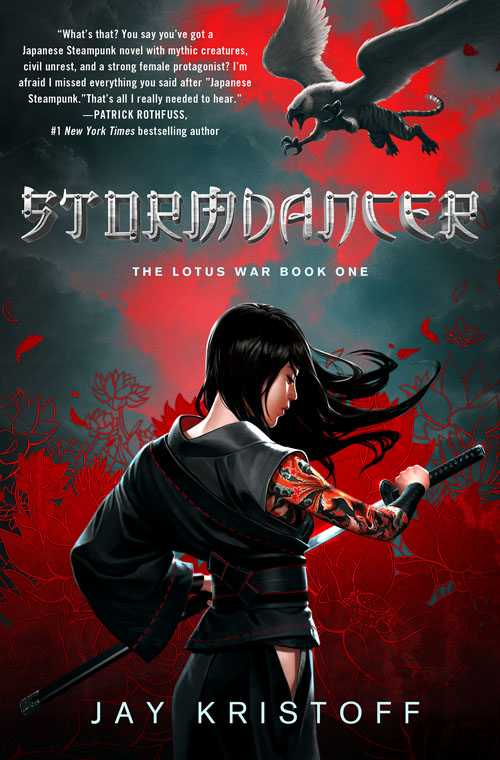 This is one of the coolest covers I have ever seen. The designer(s) should be grabbed by the face and kissed senseless. Am I right?

Here's what STORMDANCER is about:

The Shima Imperium verges on the brink of environmental collapse; decimated by clockwork industrialization and the machine-worshipers of the Lotus Guild. The skies are red as blood, land choked with toxic pollution, wildlife ravaged by mass extinctions.

The hunters of Shima's imperial court are charged by their Shōgun to capture a thunder tiger – a legendary beast, half-eagle, half-tiger. But any fool knows thunder tigers have been extinct for more than a century, and the price of failing the Shōgun is death.

Yukiko is a child of the Fox clan, possessed of a hidden gift that would see her executed by the Lotus Guild. Accompanying her father on the Shōgun’s hunt, she finds herself stranded: a young woman alone in Shima’s last wilderness, with only a furious, crippled thunder tiger for company. Even though she can hear his thoughts, even though she saved his life, all she knows for certain is he’d rather see her dead than help her.

But together, the pair will form an indomitable friendship, and rise to challenge the might of an empire.

Stormdancer is released September 18 in the US through Thomas Dunne books/St Martin’s Press.

Click here to find out more information about STORMDANCER:

So, you want to win a copy from YABC? Here's where you enter:

But wait, there's more! *she says in a proper infomercial voice*

Jay is also running a STORMDANCER Uber Giveaway on his own blog. For a chance to win another ARC and some other Stormdancer-y goodness, click here for details. You'll need to answer this question below to enter:

Question 1: The heroine of Stormdancer is named…?

Good luck! We hope you win. But if not, mark September 18 on your calendar. You won't want to miss this one.

Olivia Farr, Staff Reviewer
"DOWN UNDER THE PIER is a beautifully illustrated poem about the magic that happens, not only above, but also below..."
Castle Of Books
4.0

Michelle Lynn, Assistant Indie Manager
"Super Cute Illustrations I wasn't expecting a board book when I first saw this, but as soon as I..."
Unbeatable Betty: Betty Robinson, the First Female Olympic Track & Field Gold Medalist
5.0

World of Glass: The Art of Dale Chihuly
4.7

Melissa A. Craven, Indie Manager
"Flower Power is a truly stunning book. The large-scale pages look like paintings (I kind of want to frame them!)..."