Mira Minkoba is the Hopebearer. Since the day she was born, she’s been told she’s special. Important. Perfect. She’s known across the Fallen Isles not just for her beauty, but for the Mira Treaty named after her, a peace agreement which united the seven islands against their enemies on the mainland.

But Mira has never felt as perfect as everyone says. She counts compulsively. She struggles with crippling anxiety. And she’s far too interested in dragons for a girl of her station.

Then Mira discovers an explosive secret that challenges everything she and the Treaty stand for. Betrayed by the very people she spent her life serving, Mira is sentenced to the Pit–the deadliest prison in the Fallen Isles. There, a cruel guard would do anything to discover the secret she would die to protect.

No longer beholden to those who betrayed her, Mira must learn to survive on her own and unearth the dark truths about the Fallen Isles–and herself–before her very world begins to collapse. 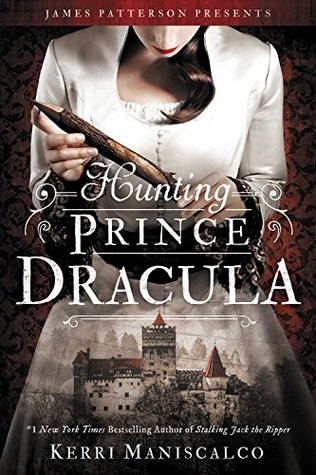 In this hotly anticipated sequel to the haunting #1 bestseller Stalking Jack the Ripper, bizarre murders are discovered in the castle of Prince Vlad the Impaler, otherwise known as Dracula. Could it be a copycat killer...or has the depraved prince been brought back to life?

Following the grief and horror of her discovery of Jack the Ripper's true identity, Audrey Rose Wadsworth has no choice but to flee London and its memories. Together with the arrogant yet charming Thomas Cresswell, she journeys to the dark heart of Romania, home to one of Europe's best schools of forensic medicine...and to another notorious killer, Vlad the Impaler, whose thirst for blood became legend.

But her life's dream is soon tainted by blood-soaked discoveries in the halls of the school's forbidding castle, and Audrey Rose is compelled to investigate the strangely familiar murders. What she finds brings all her terrifying fears to life once again. Publisher: Harper Teen
From the author of the New York Times bestselling Testing trilogy comes a sweeping new fantasy series, perfect for fans of Victoria Aveyard and Sarah J. Maas.Twins Carys and Andreus were never destined to rule Eden. With their older brother next in line to inherit the throne, the future of the kingdom was secure.But appearances—and rivals—can be deceiving. When Eden’s king and crown prince are killed by assassins, Eden desperately needs a monarch, but the line of succession is no longer clear. With a ruling council scheming to gain power, Carys and Andreus are faced with only one option—to take part in a Trial of Succession that will determine which one of them is worthy of ruling the kingdom.As sister and brother, Carys and Andreus have always kept each other safe—from their secrets, from the court, and from the monsters lurking in the mountains beyond the kingdom’s wall. But the Trial of Succession will test the bonds of trust and family.With their country and their hearts divided, Carys and Andreus will discover exactly what each will do to win the crown. How long before suspicion takes hold and the thirst for power leads to the ultimate betrayal?

Rise Of The Isle Of The Lost (Melissa De La Cruz) Publisher: Disney-Hyperion
Ride with the tide! Deep beneath the waves, King Triton’s powerful trident has passed through the magical barrier that surrounds the Isle of the Lost—keeping villains in and magic out. And when Mal’s longtime rival Uma, daughter of Ursula, gets wind of this, she can’t believe her luck. The tide has dragged in something good for a change, and Uma is determined to get her wicked hands on it. But first, she needs a pirate crew. A storm is brewing back in Auradon, and when Mal, Evie, Carlos, and Jay hear that the trident has been washed away, they realize they’ll have to find it before anyone from the Isle does. Luckily, they seem to have a talent for locating missing magical objects. As Uma readies for the high seas alongside Harry, son of Captain Hook, Gil, son of Gaston, and the toughest rogues on the Isle of the Lost, the reformed villains of Auradon devise their own master plan. And with King Ben away on royal business, they won’t have to play by all the rules. Using bad for good can’t be totally evil, right?The thrilling, perilous race to the trident puts old friends—and current enemies—against each other with the future of Auradon on the line. Both teams might like to make waves, but only one will come out on top of this one.

And The Trees Crept In (Dawn Kurtagich) Stay away from the woods…

When Silla and Nori arrive at their aunt’s home, it’s immediately clear that the manor is cursed. The endless creaking of the house at night and the eerie stillness of the woods surrounding them would be enough of a sign, but there are secrets too—questions that Silla can’t ignore: Why does it seem that, ever since they arrived, the trees have been creeping closer? Who is the beautiful boy who’s appeared from the woods? And who is the tall man with no eyes who Nori plays with in the basement at night… a man no one else can see?