YABC's Around the World in 30 Days with Joshua Winning of London, England, plus giveaways Today we're excited to welcome Joshua Winning from London, England! He's here to share his novel Sentinel as part of the YABC Around the World in 30 Days event! Read on for more about Joshua and his novel! Joshua Winning is a London author and film journalist who writes for TOTAL FILM, SFX, GAY TIMES and RADIO TIMES. He has been on set with Kermit the Frog, devoured breakfast with zombies on The Walking Dead, and sat on the Iron Throne while visiting the Game Of Thrones set in Dublin. Jeff Goldblum once told him he looks a bit like Paul Bettany. In 2014, SENTINEL – the first book in Joshua’s SENTINEL TRILOGY – was published by Peridot Press. The second book, RUINS, followed in 2015. Joshua’s short story DEAD AIR appeared in SPEAK MY LANGUAGE: AN ANTHOLOGY OF GAY FICTION and Joshua’s new novel, KILLING RUMER, will be published by Unbound in 2018. He also co-wrote ’80s teen horror CAMP CARNAGE. Joshua grew up watching Labyrinth and The Neverending Story on repeat, and was raised on a steady diet of Whedon, Cameron and Lucas. His literary heroes include Robin Jarvis, Stephen King and Daphne du Maurier. As a journalist, he has interviewed some of the most exciting names in the film industry, including Jodie Foster, Ryan Reynolds, Charlize Theron and Christopher Lee. He dreams of getting Sigourney Weaver to yell “Goddammit!” at him one day. 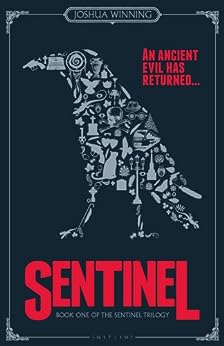 They are the world's best-kept secret – an underground society whose eternal cause is to protect the world against the dark creatures and evil forces that inhabit the night.Now Sentinels are being targeted, murdered and turned as the fury of an ancient evil is unleashed once more. And when 15-year-old Nicholas Hallow's parents are killed in a suspicious train crash, the teenager is drawn into a desperate struggle against malevolent powers.Sentinel is the first book in the Sentinel Trilogy – a world of unconventional heroes, monsters, murder and magic.

Check it out on Amazon

Emerge: The Awakening by Melissa A. Craven

We Thought We Were Invincible by Michelle Lynn

May Day Mine by Verity Croker

**And for a chance at the YABC Around the World in 30 Days Grand Prize, click the Rafflecopter post below**