Who Run the World? Girls! 6 YA Novels with Strong Heroines

Who Run the World? Girls! 6 YA Novels with Strong Heroines. 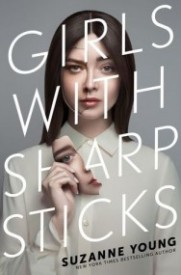 The Girls of Innovations Academy are beautiful and well-behaved—it says so on their report cards. Under the watchful gaze of their Guardians, the all-girl boarding school offers an array of studies and activities, from “Growing a Beautiful and Prosperous Garden” to “Art Appreciation” and “Interior Design.” The girls learn to be the best society has to offer. Absent is the difficult math coursework, or the unnecessary sciences or current events. They are obedient young ladies, free from arrogance or defiance. Until Mena starts to realize that their carefully controlled existence may not be quite as it appears.

As Mena and her friends begin to uncover the dark secrets of what’s actually happening there—and who they really are—the girls of Innovations will find out what they are truly capable of. Because some of the prettiest flowers have the sharpest thorns.
2. Dealing in Dreams by Lilliam Rivera 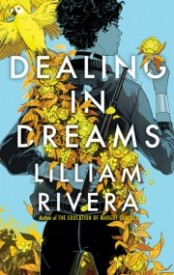 The Outsiders meets Mad Max: Fury Road in this fast-paced dystopian novel about sisterhood and the cruel choices people are forced to make in order to survive.

At night, Las Mal Criadas own these streets.

Sixteen-year-old Nalah leads the fiercest all-girl crew in Mega City. That role brings with it violent throwdowns and access to the hottest boydega clubs, but Nalah quickly grows weary of her questionable lifestyle. Her dream is to get off the streets and make a home in the exclusive Mega Towers, in which only a chosen few get to live. To make it to the Mega Towers, Nalah must prove her loyalty to the city's benevolent founder and cross the border in a search of the mysterious gang the Ashé Ryders. Led by a reluctant guide, Nalah battles crews and her own doubts but the closer she gets to her goal the more she loses sight of everything--and everyone--she cares about.

Nalah must choose whether or not she's willing to do the unspeakable to get what she wants. Can she discover that home is not where you live but whom you chose to protect before she loses the family she's created for good?
3. The Cruel Prince (The Folk of Air, #1) by Holly Black 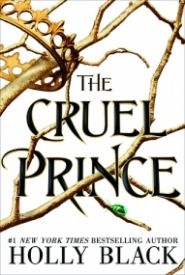 f course I want to be like them. They’re beautiful as blades forged in some divine fire. They will live forever.

Jude was seven when her parents were murdered and she and her two sisters were stolen away to live in the treacherous High Court of Faerie. Ten years later, Jude wants nothing more than to belong there, despite her mortality. But many of the fey despise humans. Especially Prince Cardan, the youngest and wickedest son of the High King.

As Jude becomes more deeply embroiled in palace intrigues and deceptions, she discovers her own capacity for trickery and bloodshed. But as betrayal threatens to drown the Courts of Faerie in violence, Jude will need to risk her life in a dangerous alliance to save her sisters, and Faerie itself.
4.Scythe by Neal Shusterman 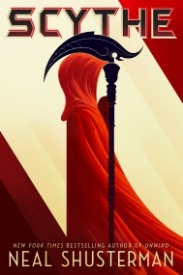 Two teens must learn the “art of killing” in this Printz Honor–winning book, the first in a chilling new series from Neal Shusterman, author of the New York Times bestselling Unwind dystology. A world with no hunger, no disease, no war, no misery: humanity has conquered all those things, and has even conquered death. Now Scythes are the only ones who can end life—and they are commanded to do so, in order to keep the size of the population under control. Citra and Rowan are chosen to apprentice to a scythe—a role that neither wants. These teens must master the “art” of taking life, knowing that the consequence of failure could mean losing their own. Scythe is the first novel of a thrilling new series by National Book Award–winning author Neal Shusterman in which Citra and Rowan learn that a perfect world comes only with a heavy price.
5. Rebel Belle (Rebel Belle #1) by Rachel Hawkins 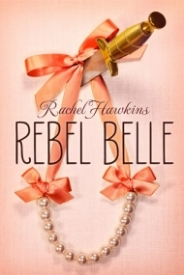 Harper Price, peerless Southern belle, was born ready for a Homecoming tiara. But after a strange run-in at the dance imbues her with incredible abilities, Harper's destiny takes a turn for the seriously weird. She becomes a Paladin, one of an ancient line of guardians with agility, super strength and lethal fighting instincts. Just when life can't get any more disastrously crazy, Harper finds out who she's charged to protect: David Stark, school reporter, subject of a mysterious prophecy and possibly Harper's least favorite person. But things get complicated when Harper starts falling for him--and discovers that David's own fate could very well be to destroy Earth. With snappy banter, cotillion dresses, non-stop action and a touch of magic, this new young adult series from bestseller Rachel Hawkins is going to make y'all beg for more.
6. Slayer (Slayer #1) by Kiersten White 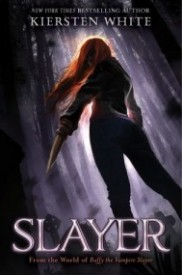 Into every generation a Slayer is born…

Nina and her twin sister, Artemis, are far from normal. It’s hard to be when you grow up at the Watcher’s Academy, which is a bit different from your average boarding school. Here teens are trained as guides for Slayers—girls gifted with supernatural strength to fight the forces of darkness. But while Nina’s mother is a prominent member of the Watcher’s Council, Nina has never embraced the violent Watcher lifestyle. Instead she follows her instincts to heal, carving out a place for herself as the school medic.

Thanks to Buffy, the famous (and infamous) Slayer that Nina’s father died protecting, Nina is not only the newest Chosen One—she’s the last Slayer, ever. Period.

As Nina hones her skills with her Watcher-in-training, Leo, there’s plenty to keep her occupied: a monster fighting ring, a demon who eats happiness, a shadowy figure that keeps popping up in Nina’s dreams…

But it’s not until bodies start turning up that Nina’s new powers will truly be tested—because someone she loves might be next.

One thing is clear: Being Chosen is easy. Making choices is hard.
Tweet

First Liners: YA Novels with First Lines that Grab Us From Page One

Thrills and Chills: 15 YA Horror Novels to Feed Your Need For a Scare

2020 is nipping at our heels and with the new year, comes new books! Below are about two palmfuls of YA titles we can't wait to check out next year!

Just In! 6 Ya Indie Novels That We've Recently Added to Our Shelves, You Should Check Out!