Today we're excited to spotlight The Losers at the Center of the Galaxy by Mary Winn Heider.

Read on for more about Mary and her book, an guest post, plus an giveaway!

A graduate of the Vermont College of Fine Arts Writing for Children and Young Adults program, Mary Winn Heider is the author of The Mortification of Fovea Munson. She lives in Chicago, where she acts in plays, rides her bike, and works for The Mystery League. You can visit her online at marywinnheider.com.

Meet The Losers at the Center of the Galaxy! 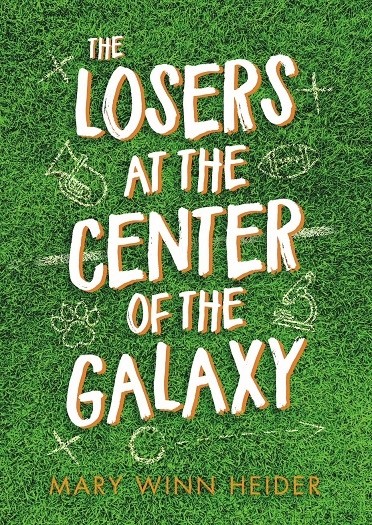 A tuba player without a tuba and his jellyfish-imitating sister cope with their father's disappearance in a middle-grade novel both hilarious and moving by Mary Winn Heider, the author of The Mortification of Fovea Munson.

When Lenny Volpe, former quarterback of the worst professional football team in the nation, leaves his family and disappears, the Chicago Horribles win their first game in a long time. Fans are thrilled. The world seems to go back to normal. Except for the Volpe kids.

Winston throws himself into playing the tuba, and Louise starts secret experiments to find a cure for brain injuries, and they're each fine, just fine, with coping in their own way. That is, until the investigation of some eccentric teacher behavior and the discovery of a real live bear paraded as the Horribles' new mascot make it clear that things are very much Not Fine. The siblings may just need each other, after all.

By Mary Winn Heider, author of The Losers at the Center of the Galaxy

There’s a moment in The Losers at the Center of the Galaxy where a couple of the characters are hanging out and the smell of chocolate drifts over them. Just randomly, the whole city of Chicago smells like chocolate. This is a TOTALLY REAL THING. For a long time, there was a downtown-adjacent chocolatier, and their manufacturing process sent a delicious hint (not too much!) of their sweets on the air. Then there was a lawsuit (sigh), and it rarely happens anymore. But if you’re lucky, and the wind blows just right, it’s magic all over again.

My characters bike a lot. Which is partly because they’re kids, and biking is a particular kind of freedom when you’re a kid. But it’s also because for years and years, that was my primary mode of transportation in the city and I loved it. Chicago’s a great biking city — it’s pretty flat, and it’s on a grid, so it’s easy to navigate — but also, it’s an awesome way to get to know the cool, different little neighborhoods. Plus, grown-ups deserve to feel free, too!

The Chicago River and (most of) its bazillion bridges make me swoony. Sure, sometimes in the summer, it can get a little ripe. But when you’re standing on one bridge, watching the sun set and the train goes over the next bridge down — it’s beautiful. (Those bridges also make for great places to throw things off, as my characters discover, although I DO NOT recommend it for non-fictional persons.)

I have cried in this library, just from how cool it is. There are ten floors, most of which is their phenomenal collection. Books as far as the eye can see (plus 3-D printers and a winter garden and instrument practice rooms??? Come on.) Even on the outside, it’s impressive — it has these five massive owls in the architecture (for knowledge), and when I say massive, the largest one is twenty feet high. Massive. Knowledge.

Chicago was a city of music before the pandemic. There was music everywhere. There’s a band mentioned in the book, Mucca Pazza — a rock marching band/marching rock band that a few of my friends are in (and that two of my main characters love). Mucca Pazza is my experience of Chicago at its best — unpredictable, chaotic good.

The Losers at the Center of the Galaxy

I love the cover and this book is high on my must read list--love humorous books.

0
I love the cover and this book is high on my must read list--love humorous books.
Cancel Update Comment
How to resolve AdBlock issue?
X