Today we're excited to spotlight Zach King: The Magical Mix-Up by Zach King! Read on for more about Zach and his book, plus a giveaway!

Zach King is a twenty-six-year-old filmmaker who creates videos with a hint of “magic.” With more than 25 million followers across his various social platforms, Zach King is one of the hottest names in digital media. He’s been featured on Ellen and on the red carpet at the Academy Awards–and he’s partnered with Lego, Disney, and Kellogg’s to create mind-blowing videos. In 2016, Zach and his wife, Rachel, competed in The Amazing Race along with other social media superstars. Born and raised in Portland, Oregon, Zach now lives with his wife in Los Angeles, California and has founded a multimedia production company to expand and create imaginative content for fans around the world.

Pat and Jen, the stars of PopularMMOs, are two of the most popular YouTubers in the world. With over 18 million subscribers and 10 billion combined views, their Minecraft-inspired channel is one of the most-watched channels on YouTube. Pat and Jen live together with their adorable and rambunctious cat, Cloud. To learn more, visit Pat and Jen on YouTube @PopularMMOs and @GamingwithJen 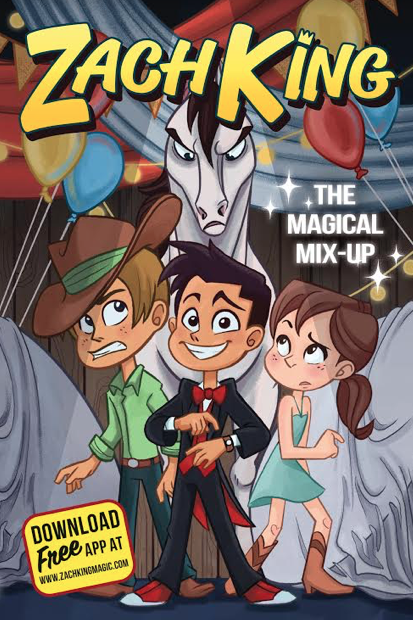 Award-winning digital media star Zach King brings his unique brand of magic to the second installment of a lively, fun-filled trilogy about Zach, a middle schooler trying to figure out what his magical powers are while navigating the crazy, confusing world of middle school.

Zach’s back for another adventure at Horace Greely Middle School. Long homeschooled, Zach’s finally comfortable at public school. Even though he’s missing his magical powers, he’s got a best friend, a super-popular YouTube channel, and a crush on Rachel, the prettiest girl in school.

Zach is confident enough to muster up the courage to ask Rachel to the big school dance. Just as he’s just about to do it, Hogan, the new kid from Australia, shows up and steals his thunder. But when Zach learns that Hogan is just using the dance as a way to embarrass Rachel and ruin her chances of becoming class president, Zach knows he has to stop him somehow.

Now Zach’s on a mission to recover his magical powers in order to stop Hogan before he can sabotage Rachel’s chances. For fans of Diary of a Wimpy Kid, Timmy Failure, and DanTDM: Trayaurus and the Enchanted Crystal and anyone who’s ever wondered where they belong, this is the perfect book for you. 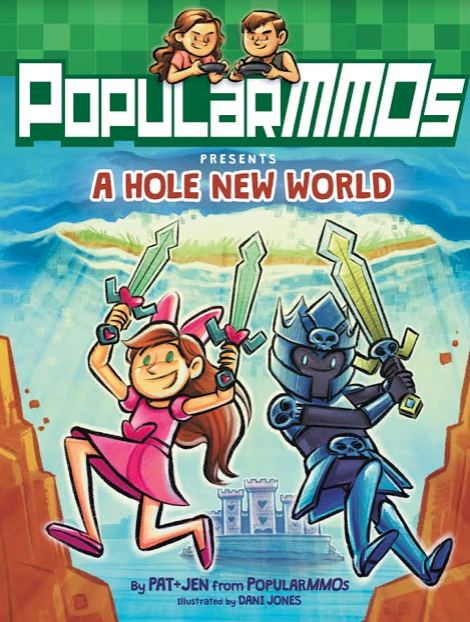 Pat and Jen—stars of one of the world’s most popular YouTube channels, PopularMMOs—reimagine the world of Minecraft in this with a wholly original, four-color, jacketed hardcover graphic novel adventure. Join one magical unicorn, one talking cloud, an enormous golem, a dimwitted ship captain, and one oblivious cat as Pat and Jen try to rescue their friends from the zombie-filled new world they’ve fallen into.

When Pat and Jen stumble into a hidden hole while playing hide-and-seek, they find that they’re trapped in a dangerous underworld and that their good friend, Bomby, has been kidnapped! Now it’s up to our daring duo and their “friend” Carter, to battle the zombies, find the castle, and get back home before it’s too late. It’s a classic PopularMMOs adventure, filled with hilarious jokes, crazy action, and beloved characters – all newly illustrated by top graphic artist Dani Jones. Can Pat and Jen find Bomby and flee the underworld before they get zombified by the evilest villain of them all—Evil Jen? You’ll have to read A Hole New World to find out.

Join beloved YouTubers Pat and Jen from PopularMMOs on this heart-stopping race to escape the undead and save their friend in the thrill-a-minute debut graphic novel from everyone’s favorite social media stars.

One winner will receive the first two books in the Zach King series (Zach King: My Magical Life & Zach King: The Magical Mix-Up) & PopularMMOs’ Presents A Hole New World (US only).

Author Chat with Brooklyn James (Just Shelby) Plus Giveaway! ~ (US Only)

Author Chat with Mara Fitzgerald (Beyond The Ruby Veil) Plus Giveaway! ~ (US Only)

Author Chat with Kenneth C Davis (Strongman: The Rise of Five Dictators and the Fall of Democracy), Plus Giveaway! ~ (US Only)

I think the covers look fun, and these sound quite adventuresome!

0
I think the covers look fun, and these sound quite adventuresome!
Cancel Update Comment

I love how colorful and FUN these books look! Also these are books that my daughter is at the perfect age to enjoy! Fingers crossed! Thank you for the chance! ?

0
I love how colorful and FUN these books look! Also these are books that my daughter is at the perfect age to enjoy! Fingers crossed! Thank you for the chance! ?
Cancel Update Comment

The cover is colorful and fun and the story sounds like it will of great interest to middle schoolers.

0
The cover is colorful and fun and the story sounds like it will of great interest to middle schoolers.
Cancel Update Comment

The covers are fun and eye-catching. The synopsis sounds exciting to read.

0
The covers are fun and eye-catching. The synopsis sounds exciting to read.
Cancel Update Comment

The book covers are colorful and fun. The characters and stories sound fun and exciting.

0
The book covers are colorful and fun. The characters and stories sound fun and exciting.
Cancel Update Comment
How to resolve AdBlock issue?
X