Read on for more about Nicole and her book, an guest post, plus an giveaway!

MY NAME IS NICOLE CONWAY and I love to write stories! I've been writing books since I was very young, and am blessed beyond measure to be able to do it now as a full time career. Although I sometimes step out into other genres, I primarily write Fantasy for teens and middle graders.

I graduated from Auburn University in 2012, which is also where I met my husband. As a military family, we move frequently and have lived numerous places all around the world. We have one very energetic son, Ethan. We also have two dogs (French Brittanys) named Joey and Phoebe, one cat named Neville, and two ball pythons, Phevos and Chiquita.

For inquiries on how to book me for a school visit, presentation, or interest in my future or current projects, please contact my amazing literary agent, FRAN BLACK, of Literary Counsel. 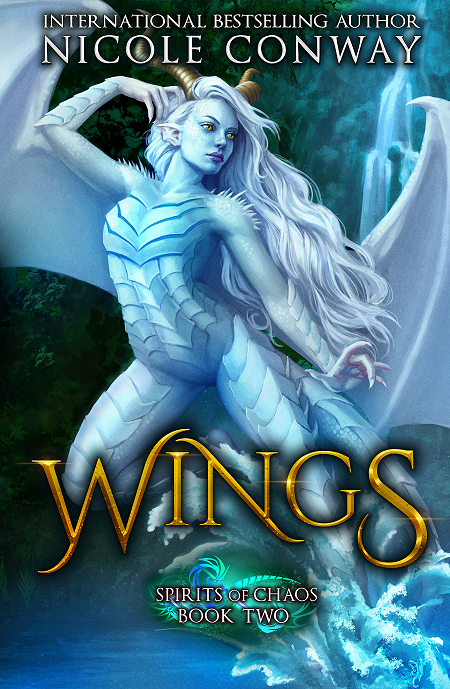 The awesome power of the dragon totems is no longer a secret, but can Koji manage to keep his identity that way?

Koji Owens isn’t just a superhero anymore. With his fame and reputation as Noxius now spreading around the world, the scaly, lightning-weilding dragon-boy is struggling to keep his identity hidden as others clamber to discover the source of his incredible power. But someone may already know his secret. While Koji is struggling to balance high school and family life with hero-work, others are watching—waiting for the perfect chance to strike.

World-renowned historian, Dr. Khepri Nimr, will stop at nothing to use the totem scales to open a portal between dimensions and enslave the entire human world to the Kur. The ancient spirits of chaos have waited for eons to claim our world, and Dr. Nimr’s plot may finally force Koji out into the open. Desperate to defend his city from the threat of more otherworldly monsters, Koji knows he can’t win this fight alone. However, not even Drake, Fyurei, and Oceana may be enough to even the odds this time. As the dark secrets of the dragon totem scales begin to unfold, Koji soon realizes that his powers might not come as freely as he originally thought. The price? His soul…

I was a military kid. I’m raising a military kid. I see, interact with, and talk to military kids (both old and young) almost every day. And over the years I’ve learned a lot about us. Old or new to the journey, young or old, we all seem to have one thing in common: We’re a little … different. We’re used to a certain level of chaos and confusion. There’s multiple tiny numbered stickers on all our furniture. Everyone in the family has a birth certificate from a different state but no one can remember what the new address is. We rely on GPS for every grocery store run. One parent has a résumé six miles long and the other’s could fit on a Post-It note. And, seriously, did the movers break the TV again?!

We live and grow in a cycle of new. We’re required to accept much while we understand little. The only constant element in our lives is change—and we’ve grown to either welcome it or have long since given up the fight to resist it. But we have a very unique perspective on many things. Koji Owens, the teenage protagonist in the Spirits of Chaos series, is basically the embodiment of what a military child goes through. He’s the only child of a fighter pilot and a professional nomad, able to shift easily into a new routine for school and social role when he has to. But that’s not to say he doesn’t feel these changes or recognize that he’s very different from his classmates. Most of the people he knows have attended the same school, church, and sports activities since they were little. Their friends are the same ones they went to kindergarten with. The teachers already know their parents well. This is a luxury that, as a military child, Koji has never known.

But like many military kids, Koji is a born survivor. In book one, SCALES, he adapts quickly and forms his network of new friends. He also finds security and confidence in the solid relationship he has with his father. Koji’s dad may not always “get” him or his interests, but there’s no lack of love there at all. It’s a crucial bond for Koji. His dad has always been his safe zone, and keeping those lines of communication open is something Koji understands to be hugely important. For most military kids, your immediate family is all you’ve got.

So … what happens if that falls apart?

In book two, WINGS, we’re going to see that family bond tested to its limits. Koji’s dad is basking in the glowing bliss of a new relationship. Meanwhile, Koji is facing changes he’s never encountered before—some that may be too much for him to handle—while still trying to play it all off like everything is normal. But his grip on things is doomed to start slipping. After all, his secret alter ego as a dragon-shifting superhero comes with a long list of risks and dangers that his dad probably wouldn’t approve of. Up till now, Koji’s biggest concern has been keeping his identity a secret. Now … he may be lucky if he gets out of this hero-gig alive.

Love the cover and it looks like a good read!

This sounds so good!

The cover is powerful. The premise sounds like this series continues to be excellent.

0
The cover is powerful. The premise sounds like this series continues to be excellent.
Cancel Update Comment

Sounds right up my alley! Looking forward to reading.

The cover is striking and beautiful. The story sounds exciting and adventure filled.

0
The cover is striking and beautiful. The story sounds exciting and adventure filled.
Cancel Update Comment
How to resolve AdBlock issue?
X