Spotlight on The Tesla Legacy (KK Perez), Excerpt, and Giveaway! Read on for more about KK and her book, an excerpt, plus an giveaway! 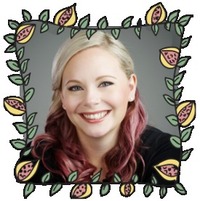 K. K. Pérez is a half-Argentine/half-Norwegian native New Yorker who has spent the past two decades living in Europe and Asia. She holds a PhD in medieval literature from the University of Cambridge and has taught at the National University of Singapore and the University of Hong Kong. As ajournalist, she’s written for many international news outlets including the Wall Street Journal Asia, Condé Nast Traveler, and CNN. Her first nonfiction adult title, The Myth of Morgan la Fey, was published by Palgrave Macmillan in 2014. 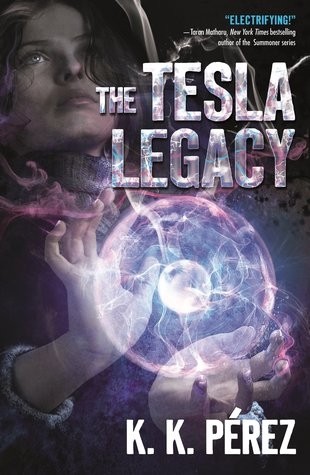 An action-packed, young adult coming-of-age adventure, K. K. Perez's The Tesla Legacy follows a precocious young scientist named Lucy Phelps whose fateful encounter in the Tesla Suite of the New Yorker Hotel unlocks her dormant electrical powers. As Lucy struggles to understand her new abilities through scientific experimentation, she is thrust into a centuries old battle between rival alchemical societies.
One side wants her help and the other wants her dead, but both believe she is the next step in human evolution. Unfortunately, carriers of the genetic mutation—including Nikola Tesla—have a greatly reduced life expectancy. Even if Lucy can outrun her enemies, she can’t outrun herself.

Cole grabbed her naked elbow. It was such a mild late-March day that Lucy hadn’t bothered with a jacket. Big mistake. Cole knew his touch made her hair stand on end mad scientist–style. Metaphorically speaking.

Lucy jerked away. “I suppose this is the part where you tell me what I saw isn’t what it looked like,” she said, and started unlocking Marie Curie––her dependable two-wheeler––from the fence that surrounded Eaton High. God forbid her parents should trust her behind the wheel of a car.

“Aren’t you going to hear me out?” Cole exhaled a frustrated breath.

Shifting closer, he rounded to Lucy’s side of the bike, sliding an arm around her waist, then threaded his fingers through her tangle of black curls. His fingertips were magic as he gently massaged her scalp. A tiny, traitorous sigh escaped her.

Lucy fidgeted with the lock’s dial, beginning to lose focus. The combination was the date of their first kiss. Of course it was.

She remembered each excruciating detail. She’d spilled her chocolate milkshake down her shirt, and was calculating the fastest escape route from Casey’s Diner when Cole leaned across the table to steady her hand. He licked a dab of chocolate from her chin and plunged his delectably edible tongue into her mouth.

Lucy never told Cole that he’d been her very first kiss. She had some shame. But hey, it wasn’t like she’d met a ton of guys being homeschooled until junior year. She should be grateful that after some hardcore lobbying on the part of her neurologist, her parents had agreed to let her attend regular school at all. She’d already garnered enough AP credits to start taking college courses online––their distinct preference––but Lucy craved a semblance of normalcy.

“All right,” Lucy relented, flicking her gaze at Cole. “Explain.”

She pocketed the bike lock and turned to face him. Lucy loved his floppy brown hair, chestnut-colored, and the way he pushed back his bangs when he was agitated. Like now.

“We’re seniors, Lucy. I didn’t think it would matter.”

“You didn’t think it would matter that you were selling test answers?” The image of Cole handing over her notes in the middle of the hallway flashed through Lucy’s mind. “Answers I gave you in the first place!” She winced as her voice reached a pitch only dogs should hear.

Megan Harper was one of the many girls who orbited around Cole, waiting for him to realize that he was way out of Lucy’s league. Cole had also come to Eaton at the start of junior year, a track star from California with a lithely muscled runner’s body and easygoing charm, who immediately took his rightful place at the top of the high school food chain. Nobody was more flabbergasted than Lucy that Cole gave her the time of day, let alone asked her out.

Cupping her cheek with his hand, he protested, “There’s nothing between Megan and me.”

Lucy lowered an eyebrow. Not twenty seconds ago, she hadn’t thought there was anything going on with Megan.

“This isn’t about me being jealous, Cole.” She shook him off. “I only agreed to help you.” And she shouldn’t have.

A cheater, that’s what Lucy was. It had started with help on his chemistry homework, taking her payment in kisses, and then letting him look over her shoulder on a calculus quiz. Harmless. She enjoyed physics experiments. Why shouldn’t she do his take-home assignments?

It wasn’t like Cole wasn’t smart, he was just always so busy with track. The team depended on him to set new long-distance records at the state championships, and his athletic scholarship was riding on it; it wasn’t fair to expect him to have time to study like everyone else.

Opposites attract, he was always saying: the manga-hot geek and the homecoming hero. The first time Lucy laid eyes on him, Cole was slouched on a worn tan loveseat in the school administration office like he belonged there. He had a talent for belonging anywhere, Lucy figured out later. At the time, he was waiting for the orientation tour when she stumbled in, quite literally, much to her chagrin.

Her book bag banged against the doorjamb, and Cole had glanced up sharply.

A mischievous smile slipped over his features. “Then we’d better stick together.”

“Like magnets,” Lucy had chimed in, mentally eye-rolling at herself for not being able to get through the first fifteen minutes of official school––ever––without revealing her inner dork.

He’d laughed, bemused but not unkind.

She hadn’t bothered asking him how he knew they were opposites.

“Luce.” Cole breathed her name, bringing her back to the present, and aimed his ultramarine gaze at her like a bull’s-eye. It was the finest weapon in his arsenal. “You’re blowing this out of proportion. No harm, no foul.”

Ultramarine: beyond the sea. That was where Cole’s eyes transported her. Always. Especially the night of Lucy’s eighteenth birthday. Another first.

Such vivid blue was the result of an unpaired electron. Which was the kind of nerdtastic factoid Lucy had gleaned during a life of near isolation, helicopter parenting, and being prodded and poked to divine the root of her migraines and seizures––although they never had. The fact that plenty of other people with epilepsy didn’t know what had caused theirs, either, did nothing to make Lucy feel better.

He leaned within kissing distance. “I did it for us.”

Sure, she’d been fantasizing about a certain dress at Neiman Marcus, and a matching corsage, and all the rest of it, but where did Cole get off implying that this was somehow her fault?

“Then I’m not going,” Lucy told him. “You’re not putting this on me. Just give Megan her money back.”

“Of course you can.”

“Since sixth period? On what?” Continuing to stare into his eyes, she realized. “This wasn’t the first time. Was it, Cole?”

He shook his head.

“How long? How long has this been going on?”

Cole shrugged. “Since Christmas, maybe?” he said, like he couldn’t remember when he’d started selling her out. “I didn’t mean to hurt you.”

He chewed his bottom lip. She wished his lips weren’t so perfect, wished she didn’t know how soft they were, or the taste of his ChapStick.

“No, you just didn’t mean for me to find out!” Lucy said, voice breaking.

He didn’t deny it. Tugging her in close, teasing his nose along her temple, Cole murmured, “I’m sorry. I love you, Luce.”

“Calm down. You know you’re not supposed to stress. It’s not good for you.”

Lucy could take anything but that.

Cole’s eyes went wide. She’d never allowed herself to be so furious around him before. He’d never given her a reason.

Thunder boomed in agreement. Lucy jumped on Marie Curie and pedaled full steam ahead without looking back. Rain began to pelt her maliciously, camouflaging her tears like in every pop-song cliché.

Cole didn’t chase after her.

By the time she made it home, Lucy was soaked, freezing, and alone.