Spotlight on The Storm, Plus Excerpt & Giveaway! Today we're spotlighting Viginia Bergin's novel, The Storm! Read on for more about Virginia and her novel, plus an excerpt, and giveaway! VIRGINIA BERGIN works as a writer for TV, eLearning, and corporate projects. Most recently, she has been working in online education, creating interactive courses for The Open University. She lives in Bristol, England. Visit her at www.virginiabergin.com. Ninety-seven percent of the population is dead. And the killer rain keeps falling. Ruby’s not sure she can make it on her own much longer. So when a chance encounter leads her to a camp with the last boy she may ever kiss (it’s not easy to date during an apocalypse), Ruby gratefully accepts the army’s protection.

But safety comes with a price: If Ruby wants to stay, she must keep her eyes—and her mouth—shut.

Except Ruby stumbles across a secret she can’t possibly keep. Horrified, she flips out and fights back—only to make the most shocking discovery of all…

Excerpt from The Storm by Virginia Bergin:

At this point in time, there are a number of things I don’t really get. But these are only the things I know I don’t get, and not the things I don’t know I don’t get, which are, unfortunately, to be revealed.
I dragged Saskia into that ice-­cream van myself. No one helped. No one tried to stop me. Crying, dog tired (don’t think about dogs)—­no, dead tired (don’t think about death)—­very (that’s OK) tired, very hungover, very ill, and very aching-­all-­over, I drove that stupid ice-cream van toward the army base. It was the only place I could think of where there would be medical help, and I took the only route I knew to get to it: highway, turn right at Swindon.
I was on the same highway I’d once driven along with the Spratt, when we sang and played silly games—­as you do when you’re trying to take your mind off an apocalypse-­type situation. And I realized a dreadful thing. That journey? It was the last time I’d laughed. I had smiled since. I had smiled pretty hard last night. Grinned witchy grins. But that journey? It was the last time I had laughed.
In an attempt to block out thoughts about the disappearance of my own laugh, I tried to find other things to think about—­but I didn’t much want to think about a single thing. Except…why had Saskia even turned up looking for me in the first place? Why would she—­why would anyone?—­leave the Camp of the Useful: the army camp where you’d be protected and taken care of? Where everything was surely…tickety-­boo, as my grandma would have said.
It was the one thing I probably should have asked her about, and now I couldn’t ask her about it, and no explanation I could come up with seemed remotely plausible:
EXPLANATION #1: Saskia is a kindhearted girl who really likes me and was so worried about whether I was OK she left the army camp.
Comments:
EXPLANATION #2: Saskia had ditched the Spratt, and she had come to beg my forgiveness.
Comments:
EXPLANATION #3: The Spratt had ditched Saskia, and she had nowhere else to go.
Comments:
EXPLANATION #4: Ruby, she kept trying to tell you something and maybe you wouldn’t have to be dreaming up explanations if you’d listened.
Comments:
There are no comments because I have nothing to say about any of my own explanations. It was almost enough to make me want to stop the ice-cream ambulance and go and shake Saskia back to consciousness for just long enough to get the truth out of her, but only a monster would do such a thing—­and I am not a monster. Thinking bad thoughts is not the same as doing bad things, and plenty of people who think they think GOOD thoughts do TERRIBLE things. (They used to call it “politics” or “religion” or “teaching mathematics.”) All I do is drive an ice-cream van.
When we finally arrive at the gates to the army base, there is a camp of useless people, like me. There are cars; there are caravans—­fires burning, people sitting out under tarps…people wrapped in blankets and duvets that tumble from their shoulders as they rise to their feet, laughing and…hooting, jeering, and cheering.
I remember that I am a witch-­fairy driving an ice-cream van.
Ahead of me, at the gates, electric lights in the dusk burn so brightly, I am blinded, and I stop long before I have to, blinking, dazzled. My head hurts.
I am getting into this base. I am getting Saskia into this base.
THUMP!
A fist against my window. I see a face—­a woman’s face. 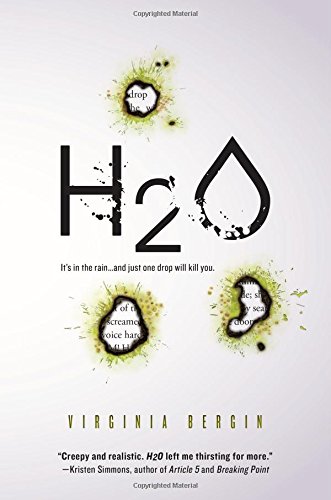 Against all odds, Ruby has survived the catastrophic onset of the killer rain. Two weeks after the radio started broadcasting the warning, “It’s in the rain. It’s fatal and there’s no cure,” the drinkable water is running out. Ruby’s left with two options: persevere on her own, or embark on a treacherous journey across the country to find her father—if he’s even still alive.

One winners will receive a copy of H20, plus a backpack/ survival kit (US and Canada only).

Author Chat with De Nichols (Art of Protest: Creating, Discovering, and Activating Art For Your Revolution! ~ (US Only)