Spotlight on The Best At It (Maulik Pancholy), Plus Guest Post & Giveaway! ~ (US Only) Today we're excited to spotlight The Best At It (Maulik Pancholy).

Read on for more about Maulik, an guest post, plus an giveaway!

Maulik Pancholy is an award-winning actor whose television work includes 30 Rock, Whitney, Web Therapy, Elementary, Friends from College, The Good Wife, The Comeback, The Sopranos, Law & Order: Criminal Intent, and more. He is also the voice of Baljeet on the Emmy Award–winning animated series Phineas and Ferb and of Sanjay on Sanjay and Craig.

Maulik is the recipient of an Asian American Arts Alliance Award and the Human Rights Campaign’s Visibility Award. In 2014, he was appointed by President Barack Obama to serve on the President’s Advisory Commission on Asian Americans and Pacific Islanders. While at the White House, he helped launch an anti-bullying campaign called Act to Change, which he continues to lead today. Maulik lives with his husband in Brooklyn, NY. This is his debut novel.

Meet The Best At It! 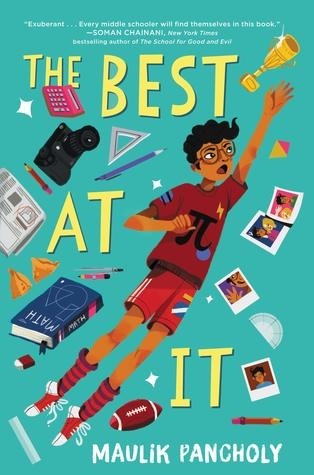 From actor Maulik Pancholy comes an incredibly charming, heartfelt middle grade debut about Rahul Kapoor, a gay Indian American boy coming into his own in a small town in the Midwest.

Rahul Kapoor is heading into seventh grade in a small town in Indiana. The start of middle school is making him feel increasingly anxious, so his favorite person in the whole world, his grandfather Bhai, gives him some well-meaning advice: Find one thing you’re really good at. And become the BEST at it.

Those four little words sear themselves into Rahul’s brain. While he’s not quite sure what that special thing is, he is convinced that once he finds it, bullies like Brent Mason will stop torturing him at school. And he won’t be worried about staring too long at his classmate Justin Emery. With his best friend, Chelsea, by his side, Rahul is ready to crush this challenge. . . . But what if he discovers he isn’t the best at anything?

Funny, charming, and incredibly touching, this is a story about friendship, family, and the courage it takes to live your truth.

We live in a diverse world, and all too often that isn’t the world we get to see in movies, television shows and books for young people. As a writer and as an actor, I find that when you land on the truth is when the work gets really exciting. Truth about characters, truth about relationships, and truth about the world we live in. It’s a big, diverse, world, and I think our literature and film should honor that.

I love the concept of “windows, mirrors, and sliding glass doors” that Dr. Rudine Sims Bishop wrote about so eloquently. I love it because I believe in it wholeheartedly. The idea that seeing your own culture reflected back can help you value yourself, and that seeing a culture other than yours can help you understand another person’s experience is something I can attest to firsthand. The strongest parallel for me is traveling. I can remember what it was like to go to India as a child and to see people who looked like me and who followed the traditions my family followed. I felt a sense of belonging and pride in who I was. And getting to travel to other foreign countries fostered in me a respect for other cultures and a sense of being part of a greater humanity. For many young people, a book or a film may be their first experience of “travel.” The windows, mirrors, and sliding glass doors we create can be powerful ways to bolster up young people and to build empathy.

I remember when I first started auditioning for television shows. I would have a hard time trying to imagine myself in the part. I look back now and realize that because there were virtually no brown people on TV back then, I was being sent a message that in order to get the job, I was going to have to be someone other than myself.

Without diverse characters in films and literature, I think we send that same message to kids about the real world. That you’re going to have to be someone else just to exist. And if, for example, the non-white, non-straight characters are always relegated to the best friend or sidekick roles, we’re sending a message that says you’re not good enough to be the lead…the lead character in your own life, really. That your experience doesn’t matter.

Who wants to read the same thing over and over again?! I can’t imagine kids do. There’s a huge world out there with a myriad of experiences – cultures, skin colors, body types, sexual identities, gender identities, and on and on. There are so many stories waiting to be told. I want to hear them all, and I think kids do too.

We’re hearing more and more how--at corporate production meetings, or in a television writer’s room, or in politics--having diverse voices at the table leads to better outcomes. That taking into consideration different perspectives leads to greater good for everyone.

Now imagine, systemically, if we were letting young people know that their voices mattered at an early age. If we were empowering them to tell their stories and to not only be themselves, but to live out loud. Imagine all the great things they could go on to do, and how that might just be better for all of us.

The Best At It