Spotlight on Mirror Bound (Monica Sanz), Excerpt, Plus Giveaway! ~ (US Only) Read on for more about Monica and her book, an excerpt, plus an giveaway! Ever since reading Wuthering Heights as a child, Monica has been obsessed with dark and heartbreaking romances (and brooding fictional men!) Now she spends her days writing all about cursed ringmasters, tortured soul collectors, grumpy magicians, and the girls who fall in love with them.

When not lost in one of her many made-up worlds, she can be found scouring YouTube for new bands to feed her music addiction. 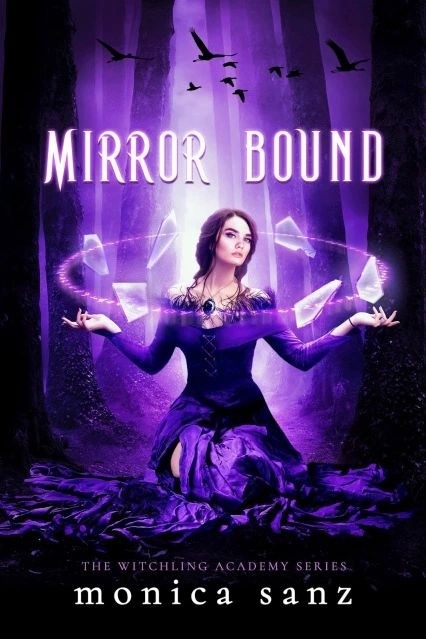 Seraphina Dovetail is used to being called all these things. As the seventh-born daughter to a witch, and the cause of her mother losing both her powers and her life, Sera has always felt isolated. Until Nikolai Barrington.

The young professor not only took an interest in Sera―he took her into his home, hired her for his moonlighting detective agency, and gave her the one thing she’d always dreamed of: a chance. Under Barrington’s tutelage, Sera can finally take the School of Continuing Magic entrance exam to become an inspector and find her family. Now if only she could stop her growing attraction to her maddening boss―which is about as easy as this fiery elementalist quitting setting things on fire.

But when ghosts start dragging Sera into possessions so deep she can barely escape, and then the souls of lost witches and wizards appear trapped in mirrors, these two opposites will have to work together to uncover a much deeper secret that could destroy the Witchling world…

The office door groaned open. Magic rushed from Sera’s stomach and filled her veins with heat, and sweat sprouted like liquid fire from her pores. A stout man with a blunt nose and pockmarked skin walked in, thin strands of his gray hair combed over the bald patch atop his head. He wore a hard-set expression and a white, ankle-length robe with the name Samson stitched below the Aetherium crest on the upper-left breast.

He moved to a wood desk mastering the back of the exam room and never once looked at her.

“Why are you here?” he asked by way of a greeting—a rather harsh, cold, and bestial one. “Speak quickly. I’ve other appointments.”

He thrust down her medical file, and Sera’s mouth bowed at the reason for his unkindness. The thick, brown dossier was marked with a dark stripe along the length, akin to the seventh-born tattoo wrapped around her wrist. The thin black line telling the world she was the seventh-born daughter to a witch, her birth the cause of her mother losing her powers and, in turn, her life.

Though used to the hostility impelled by her birth order, anger still prickled the underside of her skin, but she stifled the urge to set his paperwork on fire. At least not while her file remained on his desk. “Yes, sir, I know. I have waited four hours to be seen.”

“Then perhaps you should have made an appointment.” He set her file aside, plucked up another patient’s record, and, flipping open the cover, reviewed its contents.

She folded her fingers into her palm, their tips itching with suppressed magic. “I had an appointment.” And she’d paid half of her wages to the secretary outside to attain it.

He continued to scribble notes on the other file and never once spared her a glance. “Yes, well, be grateful I’m even here.”

As grateful as I would be if I were trampled by a horse, she mused bitterly but cleared her throat. The faster she finished with this wretched brute, the quicker she could get back home to study. “I require a physical examination for the Aetherium entrance exam.”

He paused mid-script and finally looked at her from over his glasses, close-set brown eyes narrowed under a thick, reddened brow. “But you’re a seventhborn.”

A blush gathered in her cheeks, but she held her chin a touch higher. “Yes, sir, I am. But the exam is open to anyone and everyone, should they meet the necessary qualifications. Given my extensive education during my time at the Witchling Academy, I will not be denied.” At least she hoped this was the case. Her approval letter had yet to arrive, though it was only two weeks until the exam. This didn’t matter. It would come, and when it did, she would be ready.

The cover is very pretty and will attract the YA readers of this genre. The synopsis sounds great; I need to get the first book and read it!

0
The cover is very pretty and will attract the YA readers of this genre. The synopsis sounds great; I need to get the first book and read it!
Cancel Update Comment

From the synopsis I am really intrigued. And the cover is gorgeous. Black and purple are my favorite color.

0
From the synopsis I am really intrigued. And the cover is gorgeous. Black and purple are my favorite color.
Cancel Update Comment

The cover is stunning. The synopsis is intriguing.

0
The cover is stunning. The synopsis is intriguing.
Cancel Update Comment

This cover is so pretty!

The cover is eye-catching. The synopsis sounds s unusual, exciting and fun.