Read on for more about Becky and her book, an excerpt, plus an giveaway! 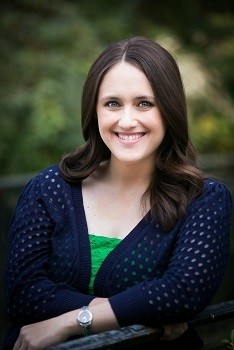 Becky Albertalli is the author of William C. Morris Award winner and National Book Award longlist title, Simon vs. the Homo Sapiens Agenda (now a major motion picture, Love, Simon); the acclaimed The Upside of Unrequited; and the New York Times bestsellers Leah on the Offbeat, What If It’s Us (cowritten with Adam Silvera), Yes No Maybe So (cowritten with Aisha Saeed), and Love, Creekwood: A Simonverse Novella.Becky lives with her family in Atlanta.  You can visit her online at www.beckyalbertalli.com. 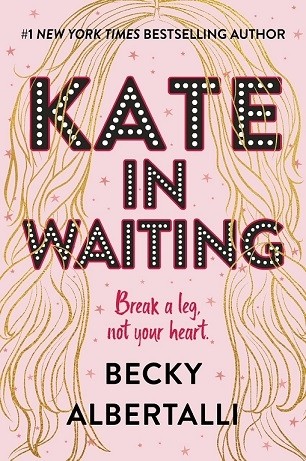 From #1 New York Times bestselling author and rom-com queen Becky Albertalli comes a buoyant new novel about daring to step out of the shadows and into the spotlight in love, life, and, yes, theater.

Contrary to popular belief, best friends Kate Garfield and Anderson Walker are not codependent. Carpooling to and from theater rehearsals? Environmentally sound and efficient. Consulting each other on every single life decision? Basic good judgment. Pining for the same guys from afar? Shared crushes are more fun anyway.

But when Kate and Andy’s latest long-distance crush shows up at their school, everything goes off-script. Matt Olsson is talented and sweet, and Kate likes him. She really likes him. The only problem? So does Anderson.

Turns out, communal crushes aren’t so fun when real feelings are involved. This one might even bring the curtains down on Kate and Anderson’s friendship.

It really feels like an ending, in every way possible. With the curtains pulled closed, the stage might as well be another planet. A well-lit planet full of giant foam set pieces, inhabited only by Andy and me—and Matt.

We just sort of stand there, in the shadow of a papier-mâché Audrey 2.

There’s nothing sadder than the end of a crush. And it’s not like this was one of those distant-stranger crushes. Andy and I have actually talked to this boy. Tons of words, on multiple glorious occasions. No small feat, since Matt’s the kind of gorgeous that usually renders us speechless. He’s got one of those old-timey faces, with blond hair and pink cheeks. Our friend Brandie collects Coca-Cola merch, and I swear the vintage ad in her bathroom looks exactly like Matt. Thus the nickname. The ad says “Thirst stops here.” But in our case, the thirst doesn’t stop.

It’s basic Avril Lavigne math. We were the junior theater counselors. He was our cute townie vocal consultant. You truly could not make it any more obvious. And for a full six weeks, he’s been the sun in our solar system. But he lives up the road from camp, in Mentone, Alabama.

Which is just about a hundred miles away from Roswell, Georgia.

So Andy’s right. Now or never.

I swear I can feel Anderson’s surprised approval. Damn, Garfield. Just going for it. Get yours.

I clear my throat. “So. We wanted to say goodbye. And. Um. Thank you.”

Matt slides a sheet of music into his tote bag and smiles. “Thank me?”

“For the vocal consultation,” I say. “And everything.”

“Aww, Kate! You too. So cool meeting you guys.” Matt hoists his tote bag over his shoulder, shifting his weight toward the door, just barely. Exit posture. Crap. I’m just going to—

“Can we take a selfie?” I blurt. I’m already cringing. You know what would be cool? If my voice would stop shaking. Also, Anderson. My dude. Anytime you want to step up, be my guest.

We squeeze into the frame, curtain tickling our backs, and I stretch my arm out at the up angle, just like Anderson trained me. And we smile. I mean, I’m trying to. But I’m so flustered, my lips are trembling.

It’s worth it. Even if I come out looking like a dazed fangirl, it’s worth it. Raina and Brandie have been begging for photographic evidence of Coke-Ad Matt’s cuteness, and God knows Instagram’s yielded nothing.

But this picture isn’t for the squad. Not really. Honestly, they’re both just going to make fun of us for having yet another communal crush. According to Raina, Anderson and I are enmeshed, which basically means we’re codependent. Apparently some people believe falling in love is a thing you’re supposed to do on your own.

And yeah, Raina aced AP Psych so hard, she’s practically a licensed psychologist already. But here’s the thing she doesn’t get. It’s not about Matt. Or Josh from last summer, who had very strong opinions about breakfast. Or Alexander from the summer before, who was really into being from Michigan. It has nothing to do with any of them.

It’s about Anderson and me. It’s about scheming in the prop closet and reading way too much into every flicker of eye contact. It’s about brushing our teeth six times a day, always prepared for the unexpected makeout scenario. And in the end, when the makeout scenarios never materialized, it hardly mattered. It didn’t matter. Because the makeouts weren’t the point.

The giddiness was the point.

And I feel like this all sounds like a Bit Much, but that’s just Andy and me. We bring it out in each other. And truthfully, summer crushes make for a surprisingly fun and robust team activity.

Less fun now that summer’s over. Now it’s just that sinking-boat feeling of a crush lost too soon. A crush cut down in its prime.

But that boat’s so much less lonely when your best friend’s on board.

Author Of The Week: Chat with CJ Redwine (The Traitor Prince), Plus Giveaway!!

I love all of Becky Albertalli's books! I can't wait to read this one. I especially love the cover.

0
I love all of Becky Albertalli's books! I can't wait to read this one. I especially love the cover.
Cancel Update Comment

The cover is cute. The synopsis tells me I'm going to love reading this book.

0
The cover is cute. The synopsis tells me I'm going to love reading this book.
Cancel Update Comment

The cover is creative. The story sounds fun and dramatic.

0
The cover is creative. The story sounds fun and dramatic.
Cancel Update Comment
How to resolve AdBlock issue?
X