Spotlight on Hazel and Gray (Nic Stone), Plus Excerpt! Read on for more about Nic, plus a excerpt!

Nic Stone is the number one New York Times bestselling author of Dear Martin, Clean Getaway, and Jackpot. Born and raised in a suburb of Atlanta, Georgia, Stone graduated from Spelman College, then worked extensively in teen mentoring and lived in Israel for a few years before returning to the US to write full-time. 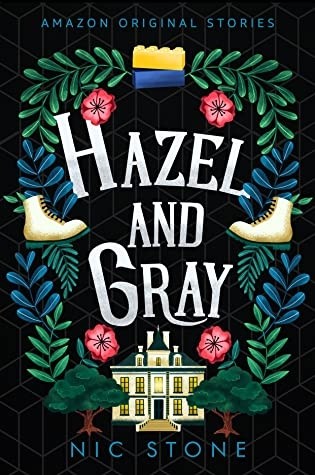 Two anxious young lovers lost in the woods. A beckoning mansion in a dark clearing. A short modern-day retelling of Hansel and Gretel by the #1 New York Times bestselling author of Dear Martin.

It’s bad enough that Hazel and Gray have defied the demands of Hazel’s foul stepfather. The Monster has forbidden their romance. Now they’ve awakened in the forest, phones dead, hours past curfew. But not far away is a grand estate in the middle of nowhere. The door is open. In this short story about choosing your own path, the fury of the Monster that awaits them back home may be nothing compared to what lies ahead.

Hazel and Gray is part of Faraway, a collection of retold fairy tales that take the happily-ever-after in daring new directions. Whether read or listened to in one sitting, prepare to be charmed, moved, enlightened, and frightened all over again. Faraway is available free to Prime members, as well as Kindle Unlimited subscribers on December 15, 2020. Readers can download each story individually, or get the whole collection with just one click.

It’s white. Two stories with a wraparound porch. There are dark shutters and a turret, and a plume of pale mist issues from the chimney, despite the warmth of the summer night. As the girl and the boy stare at it from their hidden post in the woods across the street, neither really knows what to do. They’re exhausted after hours of wandering the dark forest, and the girl is so hungry, when she blinks, the whole place morphs, taking on the look of a massive licorice-topped cake heaped with vanilla icing and strategically placed Ho Hos.

Despite it being the dead of night, every window is lit from within. When the girl and the boy first spotted the house, they slowly approached from the edge of the woods they’d been lost in, drawn toward the bright beacon like bloodthirsty mosquitos to bare flesh.

“We should go knock,” Hazel says. Her stomach rumbles. “Like, fine: it’s late. But somebody has to be awake if all of the lights are on, right?”

“I’m sure they have a phone we can borrow, or if nothing else, they can tell us where we are. Plus, I really gotta pee.” She moves to step out from the cover of the trees, but the boy catches hold of her arm.

“Whoa now,” he says. “Chill with that, Hazel. It’s literally the middle of the night, and all them lights on is real suspect.”

“We in the woods, babe. Pick a bush and handle your business.”

Desperate times call for desperate measures, so Hazel does as the boy suggests, grumbling as she squats, her back pressed against an oak tree. As she feels the sting of urine running over her swollen lady bits, it occurs to Hazel that the indignity of peeing in the woods is nothing compared to the shoved-up skirt and moved-aside undies by the river earlier. The boy above her, bare from neck to knees; Hazel on her back, her own knees splayed wide with him between them . . .

Flashes blitz through her mind and bring a flush to her face.

There’s a noise then, and the boy lets an expletive fly as he ducks behind a different oak to hide.

“Gray?” Hazel says, craning her neck to check what’s going on, but she’s unable to move because she’s . . . still peeing. “You all right?”

There’s a rumble from the road while Hazel finishes her business. As she tiptoes back to join Gray, a dark SUV whips around a bend in the road, slows, and pulls into the rounded driveway. Five guys hop out. They’re similar to Gray in both style and skin tone—loose jeans, polo shirts, and sneakers; brown like a walnut shell—and likely no older than his and Hazel’s seventeen.

The group ascends the porch steps and walks right into the house without knocking. “Yo, I think black people live there,” Gray says, amazed.

Hazel’s retort is swift. “Why do you sound so surprised?”

“Bruh, whatever. You know of anybody who looks like us and lives in a crib like that?”

Hazel huffs. She knows Gray must be just as tired and hungry as she is, but the way he’s treating her grates. Especially after their tryst by the river. Hazel’s stepfather once told her that Gray was “only after one thing,” and as much as she hates the man, those words now ring through her head.

She sighs and follows Gray’s finger. Three additional vehicles have arrived. A second SUV and a large sedan unload seven more guys of varying ages and skin tones. A smaller sedan parks and empties of its white male driver, plus four young ladies in skimpy outfits and crazy high heels. When the driver opens the front door of the house and stands aside so they can go in, Gray turns to Hazel, his eyes wide.

She swats Gray’s arm. “They’re having a party, you scaredy-cat,” she says.

Not that Gray would mention it, especially right now, but she seems different since they did what they did at the river. She’s bossier and short on patience.

Or at least it feels that way to Gray.

Anyway, Gray can’t put a finger on it, but something about all the lights on and the drop-offs and the girls in skimpy clothing gives him the heebie-jeebies. “Man, I don’t know, Hazel . . .”

“Somebody will have a phone we can borrow.” She tugs Gray to his feet. “You can call and let your mom know you’re okay, and we can figure out where the hell we are and how we’re gonna get back.”

And Gray just swallows. Because what is there for him to say? Let’s just go back into the dark woods instead of over to that nice house full of phones, and likely food too?

“Come on,” Hazel says. And she pulls him out of the forest.

CREDIT: Excerpted from Hazel and Gray by Nic Stone with permission from the publisher, Amazon Original Stories. Copyright © 2020 by Nic Stone.