Spotlight on Camp Valor by Scott McEwen, Plus Excerpt! Today we're excited to spotlight Camp Valor by Scott McEwen! Read on for more about Scott and his book, plus an excerpt!

SCOTT MCEWEN is the author of many books and the co-author of #1 New York Times bestseller American Sniper, which has sold more than one million copies and has been translated into over twenty languages. American Sniper, the movie, starring Bradley Cooper, and directed by Clint Eastwood, was the number one movie in the United States the year it came out, and was nominated for six Academy Awards, winning one. McEwen lives in San Diego, California, where he began writing while practicing law. 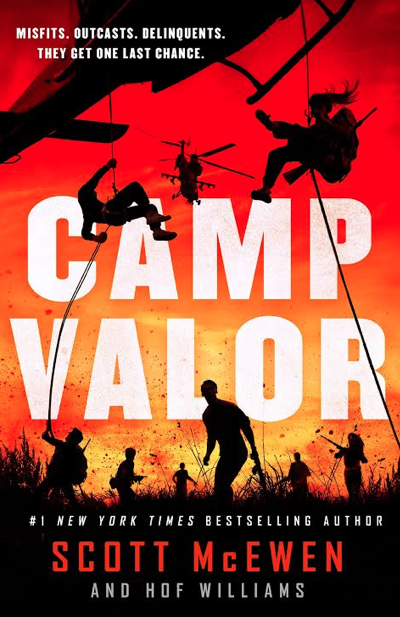 When Wyatt gets framed for a friend’s crime, he thinks his life is over. But then a mysterious stranger visits him in jail with an unusual proposal: spend three months in a secret government camp and have his ten-year prison sentence wiped clean.

Wyatt agrees, and finds himself in a world beyond his wildest dreams, with teenagers like him flying drones, defusing bombs, and jumping out of helicopters. This is no ordinary camp. Camp Valor is a secret training ground for teenage government agents, filled with juvenile offenders—badasses who don’t play by the rules—who desperately need a second chance. If they can prove themselves over their three month stay and survive Hell Week, they might just enter the ranks of the most esteemed soldiers in the United States military.

But some enemies of the United States have gotten wind of Camp Valor, and they will do everything in their power to find out its secrets. Suddenly Wyatt and his friends have to put their training into practice, and find the bravery to protect their country.

The still air gushed in around Wyatt as the Town Car glided down the blacktop. Since Wyatt was well under the driving age and had no license, he kept to the back roads that paralleled the inter- state. A thin layer of cool sweat clung to the back of his neck, little electric jolts of fear and excitement trickling through him. It was good to be out in the quiet night, Wyatt thought.

Then, without warning, two cop cars came flying up over the hill behind him, sirens squealing, racing toward Wyatt. He swore under his breath and hit the brakes. Heart hammering, he swerved the Town Car off to the side of the road, praying to God the cops would not arrest him for joy-riding and maybe let him go with a slap on the wrist.

But instead of pulling Wyatt over, they swerved around the Lincoln into the oncoming lane. They tore past, going a hun- dred miles per hour or more. Maybe an accident, Wyatt thought, breathing a deep sigh of relief. He swerved back onto the road, letting his heartbeat ease down as he drove on to meet Derrick.

The old rail yard had the dingy feel of a bad horror movie, full of junked parts, beer cans, rusting heaps of metal, and scattered piles of discarded clothes. And this time of night, it was dead quiet. Unnervingly quiet. Wyatt rolled the windows up and an- gled the Town Car down a row of train cars, moving slow, tires grinding gravel, the beams of his headlights spilling into dark, dirty, sordid spaces.

Wyatt knew the yard well. He and Cody would some- times ride out there on bikes to smash bottles and burn the stuff left by the hobos who camped in the nearby woods and slept in the train cars in the yard when it rained. But the rail yard at night was a different thing entirely, especially when alone.

Wyatt drove in as far as he could and parked. Derrick could be anywhere. Wyatt instinctively groped for his cell phone and then he remembered he’d given it to Cody. He stared into the beam cast by his headlights. Where was Derrick?

Wyatt opened the door. “D? . . . D? . . . You there?”
He knew it was quite possible Derrick couldn’t see Wyatt’s car. Or maybe Derrick thought he was a cop—they often patrolled the yard, rousting bums.

Wyatt checked in the glove box for a flashlight. Nothing.

Wyatt left the car running and got out, careful not to step on broken glass, a syringe, or even a sleeping homeless person. He thought of the time he’d found a dead animal in the middle of the yard, where it had been rotating on a spit inside a makeshift camp. The carcass of the animal was still on the spit, half- eaten, pieces of meat evidently trimmed off as the animal sizzled, licked by fire. A meal for hobos. Wyatt couldn’t immediately tell what kind of animal it was. Then he saw a dog collar in the smolder- ing ashes beneath the spit.

After that, Wyatt swore he’d never come back. Certainly not alone. And yet, there he was. Wandering out into his own headlights.

He heard a rustling and a low moan. He looked out into the dark woods, trying to follow the sound with his eyes.

Wyatt heard an unfamiliar voice. “It’s me. But I don’t know you.” Two eyes blinked on the ground, from behind a blackened face. A bottle glimmered nearby. The hobo rocked like he was going to try to get up. Then his face wrinkled, and he growled, “Rrrrrrrraaaaaaaaaahhhh!!!” His body trembled with rage and he began to push himself up, but his eyes rolled back into his head and he collapsed in the dirt.

Wyatt ran, hearing other stirrings in the woods, other voices waking up. Maybe half a dozen or so hobos were out in the woods, rousing.

Forget this, Wyatt said to himself. He spun around and started back for Narcy’s car. And then, as if on cue, Derrick ma- terialized, stepping out from a shadow.

“What are you doing?!” Wyatt asked.

“Had to make sure it was you,” Derrick said, running at an angle, light and fast like how he ran on the football field. His muscles, slick with sweat, rippled in the high beams. He wore shorts and his legs were dirty and badly scratched. He carried a small green fanny pack.

“Man,” Derrick said, “let’s go. Go. Go. Go.” He beat Wyatt to the car and dove into the back seat. Wyatt got in front and fired up the engine. Derrick was talking, but before Wyatt could hear him, he smelled him. The odor moved with the speed of a sonic boom. He didn’t just smell bad, like body odor or a fart, he smelled like a chemical accident, acrid and faintly of burnt rubber. It reminded Wyatt of how his cat, Tony, smelled the time his mom put the cat in the trunk and drove to the vet. When they arrived, the cat was scared stiff, claws stuck in the carpet, and a horrible odor—not just pee, but pee and fear—clung to everything. That was how Derrick smelled now.

Derrick lay flat on the back seat. Wyatt rolled the window down a notch and gunned it in reverse, kicking up a cloud of gravel and dust.

“Go back to bed, ya dirty bums!” Derrick yelled out the window.

“So what’s up, man,” Wyatt asked when they were back on the highway. “What kind of trouble are you in?”

“I’ll get to that later. For now, man, appreciation.” Derrick tapped the back of Wyatt’s seat. “I knew you’d come. I owe you, homie. Tell you about everything in a bit.”

Derrick rested the green bag on his chest, closed his eyes, and sunk into the pleather on the back seat.

Wyatt drove in silence, listening to the radio and steering the silver front end of the Town Car into the oncoming dark- ness.

The song wound down and the news came on. “Time for your 10-10-Wins Weather and News report. Every hour on the hour. Tonight is going to be a hot one for the tri-county area, with temperatures reaching in the mid- to upper nineties and humidity at ninety percent. . . .”

In Wyatt’s hometown, talk radio was always the same: bad weather, cheap deals, and sports teams that could never seem to find a basket or a goalpost. Wyatt reached to shut the radio off when something piqued his interest.

“Police advise residents to be on alert after the Citgo Gas Station and Car Wash in Millersville was robbed by a masked assailant. The assailant fired two shots in the commission of the crime, critically wounding the attendant before fleeing on foot. Police and state troopers are searching the area. Local residents are warned not to pick up hitchhikers and to report any suspi- cious behavior. The victim was taken to St. Mary’s Hospital and is in critical condition.”

Wyatt’s mind flashed to the cop car that had raced past him earlier that night. He looked into the rearview mirror.

Derrick lay perfectly still, eyes closed, pretending to sleep. But he couldn’t contain his smile. “I shoulda told you to keep the radio off,” he said without opening his eyes. “Nuthin’ good is ever in the news.”

“You should have told me what was up.”

“I was going to tell you at some point. Just wanted to be sure you’d show.” His smile lengthened. “Don’t worry, Wyatt, we gonna split the money. Now, I ain’t givin’ you fifty percent, but you’ll get your cut.”

“Don’t want the money, huh?” Derrick grinned, moving his butt around, getting comfy on the back seat. “Too good for it. That right?”

Wyatt said nothing.
“I bet your daddy’d take the money and run for the hills.” “Shut up,” Wyatt said, hitting the brakes. “I want you out of the car.”

“Hold on. This getting serious now.” Derrick’s playful smile faded. He cracked an eye and slid his hand into the green bag, removing a shiny silver revolver with brown grips. “You see it?” He wiggled the gun. “Tell me you see it. I want to make sure we got an understanding.” His voice cooled and sharpened. “You are in it whether you want in it or not. . . . Do we have an un- derstanding?”

“Yeah, you get it,” he said, smiling again. “Now take me home and turn the radio back up.”

Derrick lived on the east side of a little rise. As they drove up the western slope, Wyatt saw lights revolving in the treetops. They crested the hill, and below, Derrick’s entire front yard was awash in a sea of cop lights. There were at least four cruis- ers parked out front. Cops were everywhere, shining flashlights in the bushes, chatting in a cluster, lighting cigarettes. Two cops stood at the door talking to Derrick’s parents. Derrick’s mom stood hunched over in a grubby pink nightgown, her hair a jumble of flattened curls, her face gummed with tears, makeup, and confusion as she squinted through the cloud of cigarette smoke pouring out of her nostrils and mouth. Derrick’s dad had a cocky, drunken smirk and stood in the doorway, scratch- ing his balls. Wyatt’s headlights reflected off the bald strip of skin that sliced down the back of a cop’s head.

Derrick dropped like a rock and angled his revolver up, pressing it into the back of Wyatt’s neck. “You best go straight now. Don’t move, don’t slow.”

The cold barrel poked into Wyatt’s skin, in the nook between neck and jaw. He kept driving, trying to act normal. Badges gleamed against the dark uniforms in his headlights. Derrick’s dad was the first to look over, squinting dumbly toward the car. Then, in unison, the cops followed his gaze. Time elongated and the car rolled past. The cops’ necks stretched as they turned, watching Wyatt. He could feel their eyes studying the dents in the side of the car, scrutinizing his long hair, and somehow de- tecting that he was only fourteen. And really scared.