Spotlight on Bump (Matt Wallace), Guest Post, Plus Giveaway! ~ (US Only) Read on for more about Matt and his book, an guest post, plus an giveaway!

Matt Wallace is a Hugo Award winner and the author of Rencor: Life in Grudge City, the Sin du Jour series, the Savage Rebellion series, and BUMP. He’s also penned over one hundred short stories in addition to writing for film, television, and video games. In his youth he traveled the world as a professional wrestler, as well as an unarmed combat and self-defense instructor, before retiring to write full-time. He lives in Los Angeles with his wife, Nikki. 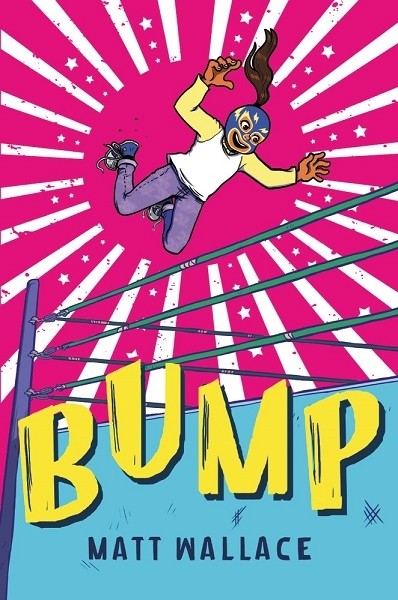 A moving and triumphant middle grade contemporary debut from award-winning author Matt Wallace about a heroic young girl—who dreams of becoming a pro wrestler—learning to find courage and fight for what she loves.

MJ knows what it means to hurt. Bruises from gymnastics heal, but big hurts—like her dad not being around anymore—don’t go away. Now her mom needs to work two jobs, and MJ doesn’t have friends at school to lean on.

There is only one thing MJ loves: the world of professional wrestling. She especially idolizes the luchadores and the stories they tell in the ring. When a chance encounter with her neighbor Mr. Arellano reveals that he runs a wrestling school, MJ has a new mission in life: join the school, train hard, become a wrestler. Once MJ starts training at Victory Academy, she feels like the hurts in her life are beginning to heal.

But trouble lies ahead. After wrestling in a showcase event, MJ attracts the attention of Mr. Arellano’s enemy at the State Athletic Commission. There are threats to shut the school down, putting MJ’s new home—and the community that welcomed her—at risk. What can MJ do to save her new family?

You may think of pro-wrestling as purely spectacle, or simulated violence with no substantive value. It’s an easy thing to judge on a surface level, and there is plenty of base wrestling in the world, just as there are baser presentations of every type of art form.

What you might not know, or understand, is that pro-wrestling in its purest, best, and most compelling form is a storytelling medium. More than that, it’s a form of storytelling that has a lot to offer the written word. Wrestling fans know that the action is entertaining, but the real attractions are the characters involved and their interpersonal conflicts with each other, the reason they’re fighting, and how their emotional conflicts play out through their physical struggles.

That is where the storytelling comes into play, and that’s where we discover lessons I’ve found invaluable as a ten-year veteran of pro-wrestling who transitioned to becoming a novelist. Here I will break down four of the biggest lessons threaded throughout the often misunderstood amalgamation of drama and combat and theater that is professional wrestling I believe we can and should apply to novel writing.

A pro-wrestling match in particular is a story told entirely through movement. Motivation, emotional conflict, the progression of that story’s arc, all are told silently. Pro-wrestling matches are prime examples of that most repeated bit of writing advice, “Show, don’t tell.” A wrestler can’t tell the audience what’s happening during a match, or why it’s happening. They have to show them. Studying this form of communication gives great insight into writing characters that convey their motivations and goals and conflicts without speaking them aloud.

Pro-wrestling personas are big and loud and theatrical and often involve taking a single trait, or archetype, and exaggerating it to the ultimate extreme. These characters can be cartoonish at times, but they also reveal why an archetype works, and what makes it compelling to an audience. Studying these seemingly over-the-top characters can be a window into the foundational elements of many classic fiction archetypes and using them to create dynamic characters that take on such tropes in a novel.

Action scenes, particularly fight scenes, whether one-on-one duels or large battles, can be a difficult thing for a lot of authors to convey in prose. It can be even more difficult to use them as a storytelling device when you’re preoccupied with trying to clearly convey what’s happening in a scene. One of the tenets of pro-wrestling is “always tell the story,” or remember what your motivation and story is and think about how each sequence of moves you perform in the ring furthers that story. Ranges of emotion and plot points and threaded throughout a well-composed pro-wrestling match. This is a key ingredient to add to any written action or fight scene, and the thing that takes it from spectacle to storytelling and furthering a story.

One of the cornerstones of pro-wrestling storytelling is the “promo,” or a wrestler speaking to the audience and/or their opponent on a microphone. Promos take many forms, from backstage interviews to live in-ring segments to cinematic presentations, but in their purest and simplest incarnation they are theatrical monologues. Promos are often designed to be delivered succinctly. The masters of the form learn how to compel audiences (and sell tickets) by drawing them into and explaining a storyline and their character with only a few words. Pro-wrestling promos can be a fascinating primer on monologue writing and character dialogue in general.

The cover is bright and eye-catching. The synopsis makes this a must read for me.

0
The cover is bright and eye-catching. The synopsis makes this a must read for me.
Cancel Update Comment

The cover is attractive and will catch the eye of young readers. This sounds like a very unique and wonderful story.

0
The cover is attractive and will catch the eye of young readers. This sounds like a very unique and wonderful story.
Cancel Update Comment

This cover is awesome! The story sounds so good!

0
This cover is awesome! The story sounds so good!
Cancel Update Comment

The cover is bright and eye-catching. How wonderful to have a book about a girl in wrestling.

0
The cover is bright and eye-catching. How wonderful to have a book about a girl in wrestling.
Cancel Update Comment
How to resolve AdBlock issue?
X