Read on for more about Paige & Nancy, plus a guest post!

Paige McKenzie is a millennial hyphenate: a New York Times best-selling author, YouTuber, actor, influencer, creator, artist, producer. Her first book series, The Haunting of Sunshine Girl, was on the New York Times bestseller list for over a month. Paige is constantly creating. Her Etsy shop the Homebody Guild is full of her art and designs, and she is always updating it with new creations. Paige also interacts daily with her Sunshiners across a variety of media including YouTube (where she has over half a million subscribers), Facebook, Twitter, and Instagram. Paige is a founding member of Coat Tail Productions, with three projects in active development. Paige lives in Portland, Oregon, with the love of her life, a seven-pound Chihuahua named Pongo.

Nancy Ohlin was born in Tokyo and moved to the United States when she was nine. She has written, ghostwritten, or collaborated on over one hundred fiction and nonfiction books for children, teens, and adults, including her YA novels Consent, Beauty, and Always, Forever (Simon & Schuster). Most recently, she collaborated with Paige on The Sacrifice of Sunshine Girl (Hachette Books), Quvenzhané Wallis on the Shai and Emmie chapter book series (Simon & Schuster), and Chloé Lukasiak on her forthcoming memoir Girl on Pointe: Chloe's Guide to Taking on the World (Bloomsbury). Learn more at nancyohlin.com and on Twitter. Nancy lives in Ithaca, NY. 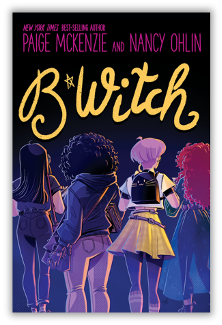 A lone witch has powers. A coven has a multitude more.

New girl and secret witchl Iris just wants to get through her first day of school without a panic attack. The last thing she expects is to be taken in by a coven of three witches-soft-spoken Greta, thoughtful and musical Ridley, and fiery and spirited Binx. They may be the first witches Iris has met IRL, but their coven is not alone in their small northwestern town.

The Triad is the other coven at their school. When the Triad's not using spells to punish their exes or break up happy couples for fun, they practice dark magic. The two covens have a rivalry stretching all the way back to junior high.

When tragedy strikes and one of their own is murdered, the rival covens must band together to find out who is responsible before it's too late. Someone's anti-witch ideology has turned deadly . . . and one of them is next.

With an inclusive cast of teen witches who leap off the page with style, attitude, and charm, B*Witch is a singable read perfect for fans of Buffy the Vampire Slayer and Mean Girls alike.

By Paige McKenzie and Nancy Ohlin

Here are ten not-B*Witch witches we love, in no particular order. It was really, really hard to pick just ten; next time we’ll be back with a much longer list!

Kiki from the movie Kiki's Delivery Service (based on the novel by Eiko Kadono). She is one of the sweetest and most complex witches out there. She struggles to find her true witch identity, and it's so pure and raw. We love her, and she will always have a special place in our hearts.

The Owens sisters, Sally and Gillian, from the movie Practical Magic (based on the novel by Alice Hoffman). First of all, their house alone earns them a spot on this list, plus we really want to live there, so who do we call about that? Sally and Gillian are so different from each other as witches and as women, which makes for a deep storyline with many wonderful, twisty-turny layers.

Glinda and Elphaba from the musical Wicked (based on the novel by Gregory Maguire, which in turn is based on the book by L. Frank Baum and the 1939 MGM movie). Talk about a team! Pure magic is made in their story. They support each other even when they disagree. So much love.

Circe from the novel Circe by Madeline Miller. Most of us know Circe as the scary sorceress in the tale of Odysseus who turns his men into pigs. But Miller transforms her into an awesome and complicated character who uses her magical powers to connect with nature and animals, and to survive (and thrive) as a BA woman in a male-dominated world. A true feminist hero.

Sunny Nwazue from the Akata Witch books by Nnedi Okorafor. Who wouldn’t love Sunny? A 12-year-old girl born in New York City to Nigerian parents, and now living in a small town in Nigeria, she is a total outsider because of her American background and because of her albinism. But then she discovers her secret magic powers and finds a coven, and her journey (which includes Leopards, Lambs, and a magic-wielding serial killer) is breathtaking.

Willow and Tara from the TV series Buffy: The Vampire Slayer. We adore how magic brings them together, and how they fall in love while growing and supporting each other as witches. It’s also fascinating (and relatable and heart-breaking) when Willow becomes unhealthily addicted to magic, promises Tara she’ll give it up, breaks her promise, then uses magic to make Tara forget about this transgression because she can’t bear to lose her.

And last but not least, Hermione Granger from the Harry Potter books and movies. Because we will never grow tired of listening to her correct Ron Weasley’s pronunciation of the levitation spell (“it’s levi-OH-sa, not levi-o-SAH”), or seeing her at the Yule Ball on the arm of the guy who isn’t her OTL, or watching her punch Draco Malfoy in the face because he super-deserved it.