Read on for more about Brenda and her book, an excerpt, plus an giveaway!

Brenda Drake grew up the youngest of three children, an Air Force brat, and the continual new kid at school. Her fondest memories growing up is of her eccentric, Irish grandmother's animated tales, which gave her a strong love for storytelling. With kids of all ages populating Brenda's world, it was only fitting that she would choose to write stories with a bend toward the fantastical for both younger readers and the young at heart. And because she married her prince charming, there's always a romance warming the pages. Her favorite books are The Secret Garden by Frances Hodgson Burnett, The Lion, the Witch and the Wardrobe by C.S. Lewis, Kings Row by Henry Bellamann, and Anna and the French Kiss by Stephanie Perkins. When she's not writing, she hosts workshops and contests for writers such as Pitch Wars and Pitch Madness on her blog, and holds Twitter pitch parties on the hashtag, #PitMad. In her free time, Brenda enjoys hanging out with her family, haunting libraries, bookstores, and coffee shops, or just reading someplace quiet and not at all exotic (much to her disappointment). 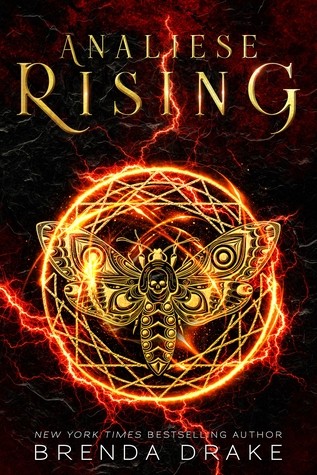 When a stranger gives Analiese Jordan a list of names before he dies, the last thing she expects to see is her own on it. Not. Cool. Her search for answers leads to the man’s grandson, Marek, who has dangerous secrets of his own. Both are determined to unlock the mystery of the list.

But the truth is deadly. Analiese is a descendant of the God of Death, known as a Riser, with the power to raise the dead and control them. Finding out she has hidden powers? Cool. Finding out she turns corpses into killers? No, thank you.

Now the trail plants her and Marek in the middle of a war between gods who apparently want to raise an army of the Risen, and Analiese must figure out how to save the world—from herself.

“To your right,” Cain mutters.

Sid glances over his shoulder. “What about it?”

Cain returns to looking out the window. “Blind spot.”

Sid slows down, and a gray smart car flies by, barely missing us.

A scowl scrunches those perfect eyebrows of his. “Next time maybe you can give me a better warning. Like some urgency in your voice.”

I lean against Marek when Sid takes a sharp turn. The warmth of his shoulder against mine causes all my nerve endings to ignite.

Shona scoots forward and wraps her arms around the front seat, resting her hands on Sid’s chest. “So what have you been up to?”

“Same as usual.” He honks the horn at a slow driver. “Partying. And more partying. However, I did go to the Philippines to see my people. Where I did some more partying.”

His people? That’s a strange way of putting it. Usually someone says they went home to visit family or friends. Maybe he doesn’t have any family. Or friends other than Shona.

“My family died ages ago,” he says as if he can read my thoughts. “I’m an orphan.”

I shift uneasily on the pleather cushion, and it makes an unpleasant noise. No one says anything. Not even a joke. If Dalton were here, he wouldn’t hold back. He’d embarrass me until I was the color of these pink seats.

We come to an abrupt stop that makes all of us jerk forward and knock back.

“We’re here,” Sid sort of sings out as if he didn’t just give everyone whiplash, slamming on the brakes.

“Girl, I got you here, didn’t I?” He leaves the Fiat running and meets us at the trunk.

The boutique hotel Shona insisted we stay at is expensive looking. It’s the kind you see in movies. The ones with vine covered stucco, romantic balconies, and potted flowers. With small cars and brightly colored Vespas weaving in and out of traffic on the road in front of it, and with street cafés and baked bread and coffee beans scenting the air around them.

Cain takes out his small and Shona’s large suitcases from the back compartment. Marek grabs mine before I can.

He places it on the asphalt. “Here you go.”

My eyes linger on his face until I realize what I’m doing and quickly turn away and grab the handle. But I don’t latch onto plastic. Marek’s hand is still there. A yelp leaves my lips, and I stumble back slightly.

“You okay?” Marek grasps my elbow to steady me, and I’m not okay. Warmth rises to my cheeks, my pulse is out of control, and I’m not sure if he realizes how touching him affects me.

But Sid does, because he gives me a knowing smile and follows it with a wink.

Grasping the handle of my bag, I tug it up the curb, getting some distance from the whole situation. I just want to be somewhere alone. Heal my embarrassment. Avoid Marek until this little incident is forgotten.

I love this cover! This book sounds so good!

0
I love this cover! This book sounds so good!
Cancel Update Comment

The cover is gorgeous and will attract your YA readers. This sounds like a great story! Good luck with your novel.

0
The cover is gorgeous and will attract your YA readers. This sounds like a great story! Good luck with your novel.
Cancel Update Comment

The cover is so pretty and the story sounds interesting.

0
The cover is so pretty and the story sounds interesting.
Cancel Update Comment

The cover is eye-catching. The synopsis is exciting. The Library Jumpers by this author was a great series and this book sounds awesome.

0
The cover is eye-catching. The synopsis is exciting. The Library Jumpers by this author was a great series and this book sounds awesome.
Cancel Update Comment

The cover is attractive and very cool. The synopsis sounds like an original and exciting take on zombie stories.

0
The cover is attractive and very cool. The synopsis sounds like an original and exciting take on zombie stories.
Cancel Update Comment

The cover is gorgeous and the synopsis sounds exciting and unique.

0
The cover is gorgeous and the synopsis sounds exciting and unique.
Cancel Update Comment