Here at Capstone we love to talk about "the story behind the story" - how our authors came to write and create the stories they share with readers. With less than one week to go in a historic presidential election season, we wanted to share the story behind one of our new election-themed children's picture books: When Penny Met POTUS.  Below and on our blog, first time author Rachel Ruiz reflects on the journey that led to her writing her inspiring and adorable new book - about a little girl named Penny, a blue furry monster named POTUS and the surprising truth behind her imagination. At a time when many of us are weary from a grueling, bitter and downright nasty campaign season, here's an inspiring story about presidents and campaigns and trips to the White House. One you'll want to share with  kids, not shield them from.

In January 2012, I made a decision that would change my life. But not right away. I accepted the job as Story Development Producer for the video team at Obama for America, the campaign to re-elect Barack Obama. I had never worked on a political campaign before, let alone a presidential one. And while I was assured I wasn’t hired for my political prowess, but rather my 15 years of experience as a TV writer and producer, I often felt lost at sea. But every morning, when I put that lanyard around my neck with the security badge that said Obama for America HQ Staff, I felt reinvigorated to tackle another day.

During the campaign, when we referred to President Obama, we called him POTUS.  Just like on The West Wing! I thought, giddily. At home, when I talked to my husband about my day, I referred to the president as POTUS. Our daughter, who was almost 3, overheard. She became fascinated. Did you have lunch with POTUS today? Is POTUS allergic to peanut butter? Does POTUS like red socks? And the question I got most often: When can I meet POTUS? I hadn’t even met President Obama yet myself, but I assured her I’d see what I could do.

When it was over, Obama had won a second term as president, and we each got a personal thank you from him at campaign headquarters. I’ll never forget his words to us that day. He said he was proud of what we accomplished. He said if we could do this, we could do anything. He said we were all destined to do great things, whether in, or outside of politics. I thought about the President’s words a lot in the days after the campaign. I didn’t want them to be in vain.  Within two weeks, I had completed the manuscript for my first children’s book. My husband came up with the title, When Penny Met POTUS.

Next, I shopped it around. I went to conferences and workshops. I tried to get an agent. I networked. A lot. I started to think maybe trying to be a movie star would be easier than getting a children’s book published! Then, on September 16, 2015, as we celebrated my daughter’s 6thbirthday, Capstone Young Readers made me an offer to buy my manuscript. I couldn’t have chosen a better partner than Capstone. From day one, they shared my vision and saw the potential of this book. I am so proud of what we’ve accomplished together.

When Penny Met POTUS was released on July 1, 2016, and since then, life hasn’t been the same. With my husband and daughter in tow, I hit the road, guest reading at schools, libraries and independent bookstores. The best part is always the Q&A with the kids. Sometimes they ask questions, but mostly they just want to share their own thoughts.  One little girl told me she wants to be president one day.  Another just wanted to introduce herself. Her name was Penny.

In early October, I received the invitation of a lifetime. I was invited to the White House for their Hispanic Heritage Month Reception. And it got even better. There would be a special opportunity to meet with President Obama. The invitation was for a plus one.  I knew exactly who I needed to bring. When my daughter and I arrived at the entrance to the East Wing on October 12, 2016, I’m pretty sure a grin from ear to ear broke across my face and remained there for the next several hours.

As my daughter and I walked down the long sunlit corridor of the East Wing, past the framed photograph collages of former presidents and first ladies, it was difficult to wrap my head around the fact that we had been invited there, as special guests. For a party. And what a party it was! The salsa music was pumping, and the buffet was stocked with empanadas, guacamole and desserts.  For a place I had never visited before, I immediately felt at home.

I tried as best I could to anchor myself during what I can only describe as an out of body experience, when I looked at my daughter and she immediately brought me back down to earth. She was not grinning. In fact, she was getting a little cranky. She was tired from waiting in line. Her tights were itchy. She was hungry. She wanted to know how much longer until we met the president. That long? Are there any kids for me to play with here? After some juice and chips and salsa, her mood improved considerably.Then we headed to the Red Room.

After waiting in another line, we were up next. It was our turn. Someone opened the doors to the Blue Room, and there they stood: President Barack Obama and Vice President Joe Biden. Someone announced us:  Rachel Ruiz, children’s book author, and her daughter Macy, and we were ushered in.As my feet started to leave the ground again, President Obama bent down to greet my daughter. She brought her lovey, a stuffed pink puppy.

“Who’s this?” the President wanted to know. Now it was my daughter that couldn’t wipe the grin off of her face.  After a few star struck seconds, she responded, “Peter.”

I spoke with the president and vice president briefly. Then we took our picture, and in a flash, the moment was over. We said our good-byes, and we were escorted to the next room.

When Macy Met POTUS – and VPOTUS -- was in the books.  And speaking of books, President Obama signed a copy of When Penny Met POTUS to my daughter!  He wrote To Macy – Dream big dreams! I’d say he captured the theme of the book pretty well, yes?

About an hour later, the party was over, and it was time to leave. My daughter looked up at me. Do we really have to? I want to stay here forever. Yes, the White House has that effect.

I told her, study hard, work hard and maybe you can live here for eight years when you get just a little older. 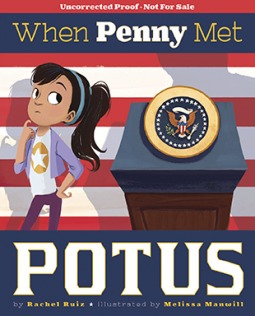 Penny has heard the term POTUS over and over but doesn't know what it means and her imagination runs wild! When she spends a day at the office with her mother, she asks a few questions, looks around, and tries to discover just who or what POTUS is.