TEEN DETECTIVE POISED TO BRING TEENS TO ART MUSEUMS --AND TO BENDEL’S, BLOOMINGDALES AND CLARINS COSMETICS 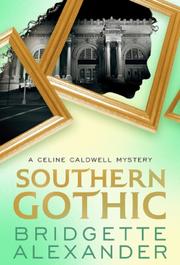 Bringing young children to an art museum is easy -- parents just decide to take them along. Expecting teens to go is another story. But current museum initiatives are looking to change all that – and one teen detective, star of her own new series – and inspiration for the launch of a new publishing house, is prepared to speed the process. Fictional, but already popular, 16-year-old Celine Caldwell has spent the last two years amassing social media fans and testing the waters for her 2016 launch with very high-profile alliances and events conceived by her author and publisher, Art Historian Bridgette R. Alexander. In March, championed by the likes of retail giants, Henri Bendel’s, Bloomingdales, and Clarins Cosmetics USA -- and with the National Women’s Book History Project; Southern Gothic: A Celine Caldwell Mystery (Paris 1865 Press, March 15) will bring teens inside the rarified world of art.

Bridgette Alexander is a modern art historian and international expert on 19th Century Art and on collecting African-American Art. She has consulted with many celebrities, financiers, and art patrons about their collections and works in partnership with Goldman Sachs, to conduct art forums at the MoMA, Art Institute of Chicago and the MOCA. Ms. Alexander has also worked intimately with some of the world’s most prestigious museums and galleries in New York, Paris, Berlin, Chicago and Los Angeles.  She’s currently at work on a new book,  Black Market: The Art of Prominent African American Art Collectors, which is the result of interviews she conducted with over a hundred prominent art collectors – including many stars from the world of sports, entertainment, and business.

Called an “urbane and privileged heroine, for a new generation” by School Library Journal, Alexander’s heroine, Celine Caldwelldraws inspiration from Nancy Drew but, according to Alexander “is a young woman all her own – bi-racial with a cadre of loyal friends, themselves of mixed race and backgrounds”. What these characters share is a reverence for the art world and a devotion to Celine, who is determined to unravel a complex tale involving blackmail, secrets, land theft, the Ku Klux Klan, and cover-up of a century-old murder from America’s darkest past. And Celine must solve it correctly and well before it destroys her own mother’s career as renowned curator of the revered Metropolitan Museum of Art.

Alexander gifts us with beautifully enriching details about art history and incorporates insights into the high-stakes art world, including; ArtSpeak, the language of art; Provenance, what clues can be found in the ownership history of a painting; How to Read a Painting, what to look for in the images and story behind a painting; and the Art World Power Brokers, the curators, art dealers, collectors, and experts who engage in million-dollar intrigue in a world few get to see.

Paris 1865 Press is a division of Late Bloom Productions, LLC. Founded by Bridgette R. Alexander, Paris 1865 will publish children’s and teen fiction primarily focused on art, the history of art, lifestyle and politics. Books will be dedicated to helping overcome bias – whether in how we view stories, art, or our present day relationships because art and history teach us how crucial that is for a safe and secure future. Spring 1865 in Paris brought one of the founding moments in modern history -- when Artist Edouard Manet introduced the provocative painting Olympia to the dynamic world of Parisian art.  Olympia broke many old rules of established painting and ushered in the era of modern art.  As it spread worldwide from Paris, modern art gave room for many new voices in art and literature. That moment inspired Paris 1865 Press.