2020 doesn't just bring new beginnings; it brings new books. You all know how much we love a new book. But we also love series, they're like gifts that keep on giving.

Here are a bunch of series continuers we can't wait to get our hands on!
1. Imagine Me (Shatter Me, #6) by Tahereh Mafi 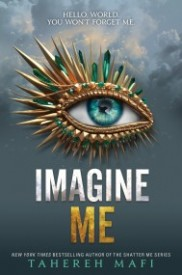 The explosive finale to the New York Times and USA Today bestselling Shatter Me series.
Juliette Ferrars. Ella Sommers. Which is the truth and which is the lie?

Now that Ella knows who Juliette is and what she was created for, things have only become more complicated. As she struggles to understand the past that haunts her and looks to a future more uncertain than ever, the lines between right and wrong—between Ella and Juliette—blur. And with old enemies looming, her destiny may not be her own to control.

The day of reckoning for the Reestablishment is coming. But she may not get to choose what side she fights on.
2. The Hand on the Wall (Truly Devious #3) by Maureen Johnson 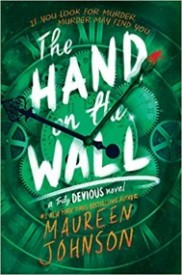 New York Times bestselling author Maureen Johnson delivers the witty and pulse-pounding conclusion to the Truly Devious series as Stevie Bell solves the mystery that has haunted Ellingham Academy for over 75 years.

Ellingham Academy must be cursed. Three people are now dead. One, a victim of either a prank gone wrong or a murder. Another, dead by misadventure. And now, an accident in Burlington has claimed another life. All three in the wrong place at the wrong time. All at the exact moment of Stevie’s greatest triumph . . .

She knows who Truly Devious is. She’s solved it. The greatest case of the century.

At least, she thinks she has. With this latest tragedy, it’s hard to concentrate on the past. Not only has someone died in town, but David disappeared of his own free will and is up to something. Stevie is sure that somehow—somehow—all these things connect. The three deaths in the present. The deaths in the past. The missing Alice Ellingham and the missing David Eastman. Somewhere in this place of riddles and puzzles there must be answers.

Then another accident occurs as a massive storm heads toward Vermont. This is too much for the parents and administrators. Ellingham Academy is evacuated. Obviously, it’s time for Stevie to do something stupid. It’s time to stay on the mountain and face the storm—and a murderer.

In the tantalizing finale to the Truly Devious trilogy, New York Times bestselling author Maureen Johnson expertly tangles her dual narrative threads and ignites an explosive end for all who’ve walked through Ellingham Academy.
3. A Heart So Fierce and Broken (Cursebreakers #2) by Brigid Kemmerer 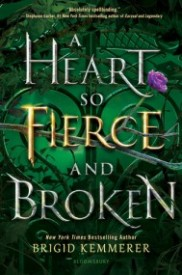 Find the heir, win the crown.

The curse is finally broken, but Prince Rhen of Emberfall faces darker troubles still. Rumors circulate that he is not the true heir and that forbidden magic has been unleashed in Emberfall. Although Rhen has Harper by his side, his guardsman Grey is missing, leaving more questions than answers.

Win the crown, save the kingdom.

Rumored to be the heir, Grey has been on the run since he destroyed Lilith. He has no desire to challenge Rhen--until Karis Luran once again threatens to take Emberfall by force. Her own daughter Lia Mara sees the flaws in her mother’s violent plan, but can she convince Grey to stand against Rhen, even for the good of Emberfall?

The heart-pounding, compulsively readable saga continues as loyalties are tested and new love blooms in a kingdom on the brink of war.
4. The Night Country (The Hazel Wood #2) by Melissa Albert 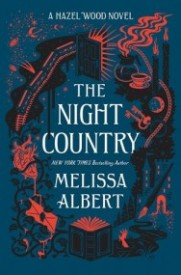 In The Night Country, Alice Proserpine dives back into a menacing, mesmerizing world of dark fairy tales and hidden doors. Follow her and Ellery Finch as they learn The Hazel Wood was just the beginning, and that worlds die not with a whimper, but a bang.

With Finch’s help, Alice escaped the Hinterland and her reclusive grandmother’s dark legacy. Now she and the rest of the dregs of the fairy tale world have washed up in New York City, where Alice is trying to make a new, unmagical life. But something is stalking the Hinterland’s survivors―and she suspects their deaths may have a darker purpose. Meanwhile, in the winking out world of the Hinterland, Finch seeks his own adventure, and―if he can find it―a way back home...
5. Igniting Darkness (Courting Darkness Duology #2) by Robin Lafevers 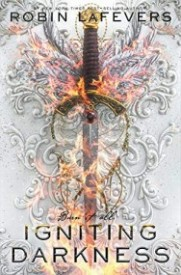 When you count Death as a friend, who can stand as your enemy?

Sybella, novitiate of the convent of Saint Mortain and Death’s vengeance on earth, is still reeling from her God’s own passing, and along with him a guiding hand in her bloody work. But with her sisters on the run from their evil brother and under the watchful eye of her one true friend (and love) at court, the soldier known as Beast, Sybella stands alone as the Duchess of Brittany’s protector.

After months of seeking her out, Sybella has finally made contact with a fellow novitiate of the convent, Genevieve, a mole in the French court. But when Genevieve mistakenly draws the attention of the French king to the convent of Saint Mortain and its deadly arts, she may do her sisters (and herself) more harm than good. Sybella, having already drawn the ire of the French regent, may not be able to depend on her sister and ally as much as she hoped. Still, Death always finds a way, even if it’s not what one expects.

No one can be trusted and the wolves are always waiting in this thrilling conclusion to the Courting Darkness duology, set in the world of Robin’s beloved His Fair Assassins trilogy.
6. One of Us is Next (One of Us is Lying #2) by Karen M. McManus 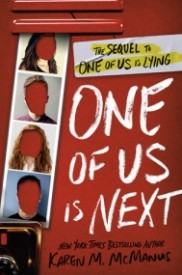 The highly anticipated sequel to the New York Times bestselling thriller everyone is talking about, One of Us Is Lying! There's a new mystery to solve at Bayview High, and there's a whole new set of rules.

Come on, Bayview, you know you've missed this.

A ton of copycat gossip apps have popped up since Simon died, but in the year since the Bayview four were cleared of his shocking death, no one's been able to fill the gossip void quite like he could. The problem is no one has the facts.

This time it's not an app, though—it's a game.

Phoebe's the first target. If you choose not to play, it's a truth. And hers is dark.

Then comes Maeve and she should know better—always choose the dare.

But by the time Knox is about to be tagged, things have gotten dangerous. The dares have become deadly, and if Maeve learned anything from Bronwyn last year, it's that they can't count on the police for help. Or protection.

Simon's gone, but someone's determined to keep his legacy at Bayview High alive. And this time, there's a whole new set of rules.
7. The King of Crows (Diviners #4) by Libba Bray 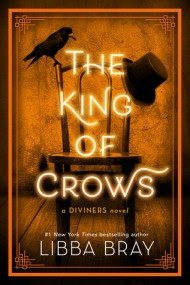 After the horrifying explosion that claimed one of their own, the Diviners find themselves wanted by the US government, and on the brink of war with the King of Crows.

While Memphis and Isaiah run for their lives from the mysterious Shadow Men, Isaiah receives a startling vision of a girl, Sarah Beth Olson, who could shift the balance in their struggle for peace. Sarah Beth says she knows how to stop the King of Crows-but, she will need the Diviners' help to do it.

Elsewhere, Jericho has returned after his escape from Jake Marlowe's estate, where he has learned the shocking truth behind the King of Crow's plans. Now, the Diviners must travel to Bountiful, Nebraska, in hopes of joining forces with Sarah Beth and to stop the King of Crows and his army of the dead forever.

But as rumors of towns becoming ghost towns and the dead developing unprecedented powers begin to surface, all hope seems to be lost.

In this sweeping finale, The Diviners will be forced to confront their greatest fears and learn to rely on one another if they hope to save the nation, and world from catastrophe...
8. 10 Things I Hate About Pinky (Dimple & Rishi #3) by Sandhya Menon 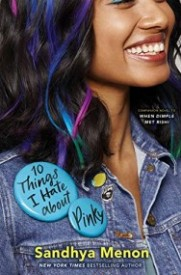 The delightful follow-up to When Dimple Met Rishi and There’s Something about Sweetie follows Pinky and Samir as they pretend to date—with disastrous and hilarious results.

Pinky Kumar wears the social justice warrior badge with pride. From raccoon hospitals to persecuted rock stars, no cause is too esoteric for her to champion. But a teeny-tiny part of her also really enjoys making her conservative, buttoned-up corporate lawyer parents cringe.

Samir Jha might have a few . . . quirks remaining from the time he had to take care of his sick mother, like the endless lists he makes in his planner and the way he schedules every minute of every day, but those are good things. They make life predictable and steady.

Pinky loves lazy summers at her parents’ Cape Cod lake house, but after listening to them harangue her about the poor decisions (aka boyfriends) she’s made, she hatches a plan. Get her sorta-friend-sorta-enemy, Samir—who is a total Harvard-bound Mama’s boy—to pose as her perfect boyfriend for the summer. As they bicker their way through lighthouses and butterfly habitats, sparks fly, and they both realize this will be a summer they'll never forget. 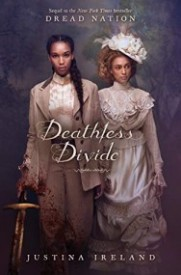 The sequel to Dread Nation is a journey of revenge and salvation across a divided America.

After the fall of Summerland, Jane McKeene hoped her life would get simpler: Get out of town, stay alive, and head west to California to find her mother.

But nothing is easy when you're a girl trained in putting down the restless dead, and a devastating loss on the road to a protected village called Nicodermus has Jane questioning everything she thought she knew about surviving in 1880's America.

What's more, this safe haven is not what it appears - as Jane discovers when she sees familiar faces from Summerland amid this new society. Caught between mysteries and lies, the undead, and her own inner demons, Jane soon finds herself on a dark path of blood and violence that threatens to consume her.

But she won't be in it alone.

Katherine Deveraux never expected to be allied with Jane McKeene. But after the hell she has endured, she knows friends are hard to come by - and that Jane needs her, too, whether Jane wants to admit it or not.

Watching Jane's back, however, is more than she bargained for, and when they both reach a breaking point, it's up to Katherine to keep hope alive - even as she begins to fear that there is no happily-ever-after for girls like her.
10. The Storm of Life ( The Brilliant Death #2) by Amy Rose Capetta 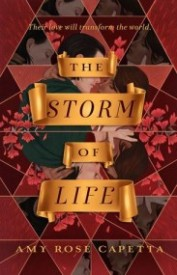 The sumptuous and powerful conclusion to the gender-fluid duet begun by The Brilliant Death, hailed by Kirkus as "a delicious and magical intrigue too tempting not to devour" (starred review).

Teodora diSangro and Cielo, the strega she loves, are on a mission to save their country of Vinalia from its manipulative leader, who wants to exploit streghe and use them as his weapons. But will marshaling a small but powerful band of streghe be enough to wrest power from a cunning dictator? And what if Teo's been setting her sights on the wrong enemy all along? This epic sequel to The Brilliant Death completes the Italian-inspired fantasy duet with shocking twists, steamy romance, and magic that will dazzle your imagination and make you wish Vinalia were a real place.
Tags Newsletter
PRINT