YABC is thrilled to be hosting a spot on the VIOLETS ARE BLUE by Barbara Dee Blog Tour hosted by Rockstar Book Tours. Check out our post and make sure to enter the giveaway! 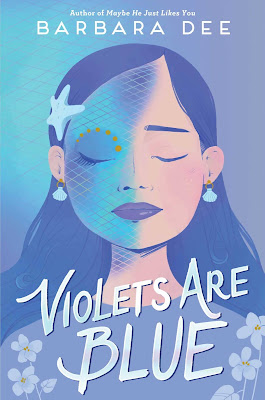 Praise for The VIOLETS ARE BLUE:
“Dee addresses with aplomb important topics such as opioid addiction, divorce, bullying, and moving. This inspired novel deftly depicts the self-doubt and loneliness that many children (and adults) feel.” -- September 2021 ― School Library Journal

Hey, guys, Cat FX here. Sorry if my voice sounds funny—my allergies are going full blast this morning. Also, I couldn’t sleep. So I spent the night thinking what I wanted to say to you, and here it is: It’s really important not to overdo stuff, okay? Yes, I know it’s exciting when you have all these shiny new products to play with, and you want to use everything all at once. But trust me on this, it’s better to go slowly, adding layer on top of layer, building your character from the inside out. Know what I mean? Also—and guys, I can’t stress this enough— try not to be too obvious. Have fun with these techniques. Experiment, take risks, but always leave room for a bit of mystery.

Tonight my face was Seafoam Blue. Not my whole face. Just a light swish across my forehead, the tops of my cheekbones, and around my chin. The trick was to go slowly, like Cat FX said, applying layer on top of layer. Better to add than to subtract. Build the character from the inside out. And to be who I imagined—my mental mermaid—I couldn’t just slather on a ton of blue pigment. My mermaid’s superpower was a kind of camouflage: blending into her surroundings. Slipping undetected through sunken ships. Escaping deadly sea monsters. Coming up for air when necessary. The other thing I’d decided was that she was a collector. So when she won a battle, or discovered buried treasure, she would always decorate herself with souvenirs. To never forget what she’d been through, what she’d seen. To make it part of herself forever.

Which was why I was gluing a plastic pearl to my eyebrow when I heard the GRRRRUUUNNNCCCHHH.

We’d been living here for almost three months, and I still couldn’t get used to the awful grinding sound of the garage door.

But at least it gave me warning. Before Mom could get all the way upstairs, I tossed the jar of Seafoam Blue face pigment, the eye shadow in Cyber Purple, the waterproof eyebrow pencil in Medium Brown, and the spidery false eyelashes into my secret makeup kit. Then I slid it under my bed, all the way to the farthest corner, tossing in an old sneaker to hide it. The shoebox marked M stayed on my desk. Visible.

I checked the clock. Only 8:35. Mom clomped up the stairs in her thick-soled Jungle Mocs, which I’m pretty sure is the official footwear of ER nurses when they aren’t wearing sneakers. Just in time, I beat her to the door of my bedroom.

“Hey, honeybee,” she called as she reached the top step. In her wrinkled spearmint-green scrubs, she looked droopy, like a plant you forgot to water. When she smiled, you could see how hard her face was working. “Is that the mermaid?” she asked, lightly touching my cheek. “Yeah,” I said. Mom could always tell the effect I was going for, even when I was in the middle of a character.

“Although I’m not totally sure about the color.”

“I don’t know. The Seafoam Blue seems wrong. Too greenish, maybe? And I’m not getting that shimmery underwater effect. I followed all the directions, but . . .” I shrugged. “It’s not how I thought.”

“Well, I think it looks really great so far. And I love that eyebrow pearl.” She pushed her too-long bangs out of her eyes. “You finished your homework, Wren?”

“Yep. An hour ago.” She looked past me, into my room. Could she see the makeup kit under my bed? No, that was impossible. But of course she could see the shoebox marked M—on my desk, like usual.

“And did your friend Poppy come over after school?” Mom always called her “your friend Poppy,” like she thought she needed to remind me that everything was different now: I had a real friend.

“Mom, Poppy has soccer. Remember I told you?” At least twice. No, more than that.

“And why are you home so early?” Again.

“Another mix-up with scheduling. My supervisor keeps overstaffing.” Mom leaned against my door and shut her eyes. For a few seconds I just watched her. With all the changes in her schedule, I knew she hadn’t been sleeping well. Not during the night, anyway. So it didn’t shock me to see her so tired. Still, it was a little awkward, both of us just standing there, not talking. Not moving.

When she took a step, her knee buckled, or something. She grabbed the doorknob to keep from falling. “You okay?” I said quickly. “I’m fine.” A small wince.

“Just my stupid knee acting up again. Don’t worry about it, Wren. I have an early shift tomorrow, so I think I’ll just take some Advil and get into bed. Will you please walk Lulu so she can pee?”

Lulu was our three-legged French bulldog. She peed sixteen times a day, and that’s no exaggeration. “Sure,” I told her. “Go rest, Mom. And put a pillow under your knee.”

“Hey, I’ll be the nurse around here, not you.” She threw me a little smile as she disappeared into her bedroom. I waited, and then I heard it: Click.

One day while I was at school, Mom had a lock put on her door. To keep the cat off her bed, she’d explained. Although, really, that made no sense, because our one-eyed cat, Cyrus, was too old to jump that high anyway.

And now, every time I heard that sound—click—my heart flipped over, but I couldn’t say why.

I returned to the mirror propped up on my desk, in front of the shoebox. The mermaid looked blurry now, out of focus, the Seafoam fading into boring pink skin.

And the funny thing about makeup effects? They were all just technique, Cat FX said, not magic. But sometimes if you stopped in the middle, it was like you were breaking a spell—and no matter how hard you tried, you couldn’t get it back.

I wiped my face and went downstairs to get Lulu’s leash. 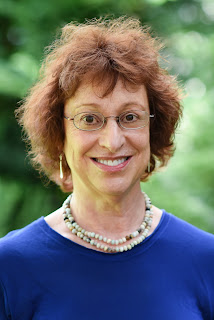 Barbara Dee is the author of twelve middle grade novels published by Simon & Schuster, including Violets Are Blue, My Life in the Fish Tank, Maybe He Just Likes You, Everything I Know About You, Halfway Normal, and Star-Crossed. Her books have earned several starred reviews and have been named to many best-of lists, including the The Washington Post’s Best Children’s Books, the ALA Notable Children’s Books, the ALA Rise: A Feminist Book Project List, the NCSS-CBC Notable Social Studies Trade Books for Young People, and the ALA Rainbow List Top Ten. Barbara lives with her family, including a naughty cat named Luna and a sweet rescue hound named Ripley, in Westchester County, New York.

3 winners will receive a finished copy of VIOLETS ARE BLUE, US Only.

This book sounds heartbreakingly beautiful! I am adding this one to my list for sure. Thank you so much for sharing!

0
This book sounds heartbreakingly beautiful! I am adding this one to my list for sure. Thank you so much for sharing!
Cancel Update Comment

I think the cover helps set the atmosphere for the story enclosed which sounds like a very emotional read. I love the author's work.

0
I think the cover helps set the atmosphere for the story enclosed which sounds like a very emotional read. I love the author's work.
Cancel Update Comment

The cover is beautiful and the story sounds heartbreaking and relevant for so many young people.