Seventeen-year-old Ruby is a fireblood who must hide her powers of heat and flame from the cruel frostblood ruling class that wants to destroy all that are left of her kind. So when her mother is killed for protecting her and rebel frostbloods demand her help to kill their rampaging king, she agrees. But Ruby's powers are unpredictable, and she's not sure she's willing to let the rebels and an infuriating (yet irresistible) young man called Arcus use her as their weapon.

All she wants is revenge, but before they can take action, Ruby is captured and forced to take part in the king's tournaments that pit fireblood prisoners against frostblood champions. Now she has only one chance to destroy the maniacal ruler who has taken everything from her and from the icy young man she has come to love.

Fast-paced and compelling, Frostblood is the first in a page-turning new young adult three-book series about a world where flame and ice are mortal enemies—but together create a power that could change everything. Elly Blake loves fairy tales, old houses, and owls. After earning a BA in English literature, she held a series of seemingly random jobs, including project manager, customs clerk, graphic designer, reporter for a local business magazine, and library assistant. She lives in Southwestern Ontario with her husband, kids and a Siberian Husky mix who definitely shows Frostblood tendencies.

Her work is represented by Suzie Townsend of New Leaf Literary & Media. 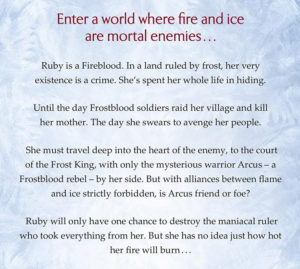 It's Live!! Cover Reveal: The Memory Trees by Kali...
Featured Review: A Bitter Pill to Swallow by Tiffa...

I'm so excited for this!