Feb 01 Posted by YABC in Giveaways THE 57 LIVES OF ALEX WAYFARE

For as long as 17-year-old Alex Wayfare can remember, she has had visions of the past. Visions that make her feel like she’s really on a ship bound for America, living in Jamestown during the Starving Time, or riding the original Ferris wheel at the World’s Fair.

But these brushes with history pull her from her daily life without warning, sometimes leaving her with strange lasting effects and wounds she can’t explain. Trying to excuse away the aftereffects has booked her more time in the principal’s office than in any of her classes and a permanent place at the bottom of the social hierarchy. Alex is desperate to find out what her visions mean and get rid of them.

It isn’t until she meets Porter, a stranger who knows more than should be possible about her, that she learns the truth: Her visions aren’t really visions. Alex is a Descender – capable of traveling back in time by accessing Limbo, the space between Life and Afterlife. Alex is one soul with fifty-six past lives, fifty-six histories.

Fifty-six lifetimes to explore: the prospect is irresistible to Alex, especially when the same mysterious boy with soulful blue eyes keeps showing up in each of them. But the more she descends, the more it becomes apparent that someone doesn’t want Alex to travel again. Ever.

And will stop at nothing to make this life her last. 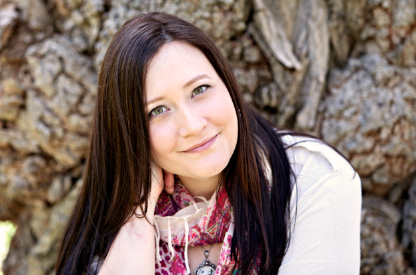 When she’s not writing, M.G. moonlights as a web designer and social media/creative director. She’s the current web ninja lurking behind the hugely popular website YABooksCentral.com, a social network for YA (and kids!) book lovers. These are the places you’ll find M.G. hiding: in her creaky old house nestled in Michigan pines, sipping coffee on her porch, cooking over campfires, and dipping her toes in creeks. Say hello to M.G. on Twitter, Facebook, and Tumblr.

If you pre-order THE 57 LIVES OF ALEX WAYFARE, you're eligible to enter to win these awesome prizes:

Each person who provides proof of pre-order will receive a swag pack, including signed bookmarks, a signed bookplate for your copy of the book, and "Talk Nerdy to Me" stickers.

All you need to enter is proof of preorder by sending us a screenshot of your receipt. Simple as that!

Click here to preorder The Fifty-Seven Lives of Alex Wayfare from one of these fine establishments: Barnes & Noble | Books-a-Million | Amazon | Indiebound | The Book Depository | Waterstones

This giveaway is open internationally. Winners will be notified by email within 30 days of the giveaway end date.

To enter, fill out the Rafflecopter form below. Good luck!