Hi everyone! Thanks so much for having me today! I am so excited to finally get to introduce REWRITTEN’s cover to the world! Isn’t it gorgeous?!

So much is tricky about sequels, and this cover was no exception. I absolutely adore the cover of Unwritten, and so I was a little nervous that REWRITTEN’s cover couldn’t possibly top it. But when I learned that the same artist, Jomike Tejido, would be illustrating REWRITTEN’s cover, I knew I was in excellent hands. (He is amazing!)

I talked a lot with my editor, Mari Kesselring, about this cover, and we both wanted something that was similar in design to the first book, but not too similar: it had to be different enough that it was its own distinct book, while still capturing the magical feel of the first novel. (Which seems like kind of a metaphor for the entire sequel-writing process, actually….) We wanted to keep the same style of the split down the middle—half the cover depicts Gracie in the real world, and half the cover depicts the fantasy world she ventures into when she travels inside a story—but Gracie’s journey is very different in this book, and I think the cover does an excellent job of rendering that.

For me, the most exciting part of this cover is getting to see an artist’s rendition of the fantasy world I created: I think it’s absolutely perfect! And I love that Gertrude Winters, who is so important to this story, got to be featured on the cover. I hope you all love it as much as I do! 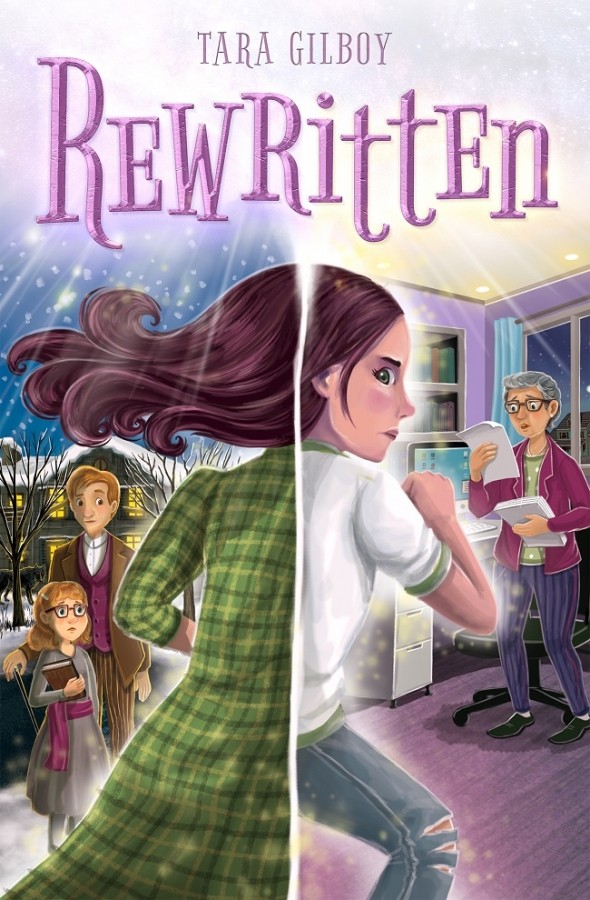 After learning the truth about her own fairy tale, twelve-year-old Gracie wants nothing more than to move past the terrible things author Gertrude Winters wrote about her and begin a new chapter in the real world. If only things were going as planned. On the run from the evil Queen Cassandra, the characters from Gracie’s story have all been forced to start over, but some of them cannot forget Gracie’s checkered past.

Even worse, Gracie discovers that her story is still being written in Cassandra’s magic book, the Vademecum. As long as Cassandra has the Vademecum, none of the characters are safe, including Gracie’s mom and dad. In a desperate attempt to set things right, Gracie finds herself transported into another one of Gertrude’s tales—but this one is a horror story. Can Gracie face her destiny and the wild beast roaming the night, to rewrite her own story?

Tara Gilboy holds an MFA in creative writing from the University of British Columbia, where she specialized in writing for children and young adults. She teaches for San Diego Community College District’s continuing education program and is the author of Unwritten and its forthcoming sequel, Rewritten. You can find her at taragilboy.com and on Twitter as @taramgilboy.

3 winners will each receive 1 advanced reader copy of Rewritten AND 1 final copy of book one, Unwritten. US Only.