Thanks so much for checking out the cover of my debut novel, MIND RIOT! That’s right, my very first book and cover reveal. I’d say that this is the fun part, but the REUTS team (especially Kisa Whipkey) has made every part of the publishing process feel like I’m eight years old and it’s snowing on Christmas morning. In Los Angeles.

The cover was created by the magic-making cover guru, Ashley Ruggirello. Inspired by the energy and recklessness that jumps off the pages of this story, she transformed an obscure idea about a notepad into this rad, minimalist, three-color concept. I was hoping she would crank the volume of this cover up to eleven. I think we hit twelve. At first glance, I knew this design needed to be a framed poster on my wall. Right between my Redd Kross and Butch Walker posters.

Don’t miss out on all of the symbolism scribbled on the front, back, and spine of this book. My hope is that after each chapter you finish, you peek back at the cover, placing the doodles with your memories of Salem’s story. I hope you all enjoy reading MIND RIOT half as much as I enjoyed writing it! 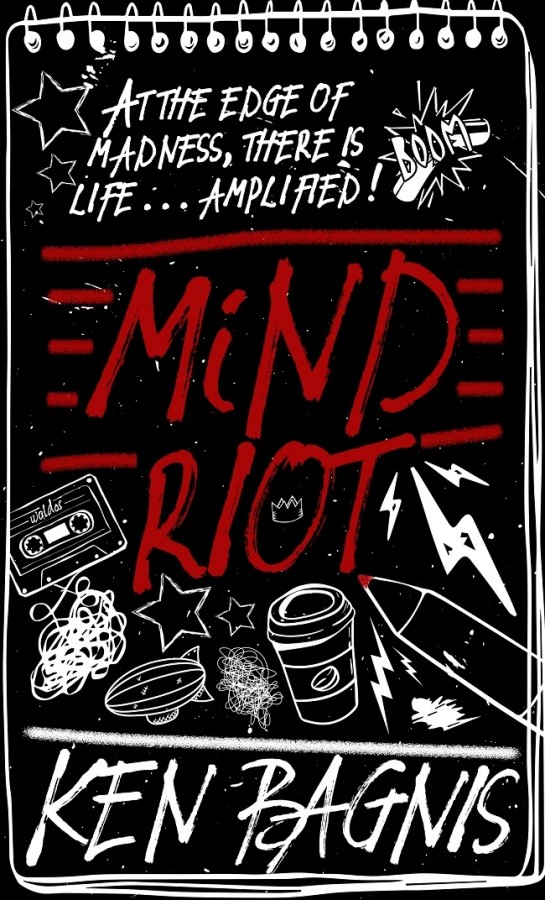 Salem Scott has one goal for his post-junior year summer vacation—carefree days spent jamming with his band. Too bad those plans are about to crash and burn, right into the side of his crush’s house. Now, he’s on the hook for the repairs, and instead of jamming with his band, he’s stuck volunteering in a private mental institution.

Armed with an ugly yellow sweater and BFF Jace, Salem braves his new job. But getting up close and personal with the patients forces him to confront demons he’s not ready to face. And when the band kicks him to the curb for missing rehearsals, he’s left teetering on the brink. Only, he understands this darkness better now, and accepting it as part of him lets him see he’s been given the opportunity of a lifetime. He’ll form a new band, with the hospital’s motley crew of characters.

His job just turned into the greatest summer of all time.

Hopeful and fun, Mind Riot explores the angst of being painfully hipster in small-town America, the pain of functional depression, and what happens when kids who are “too cool for feels” are dropped into a reality where emotions are too loud to ignore. 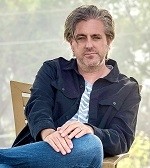 Ken Bagnis is an accomplished musician and practicing psychotherapist. He has been crafting stories and singing for rock-n-roll bands since his early youth in Cleveland, Ohio. Musical success took the form of tens of records sold, supported by a North American tour in a filthy Econoline van which lasted several years.

Ken shares at least four eerie connections with Hawaiian entertainer Don Ho, including a number one record on the island of Oahu for two straight weeks. When the tour ended on super-sunny Christmas in Los Angeles, Ken vowed he would never drive in the snow again. Wandering down a side street lit by the Gazzarri’s parking lot, he contemplated starting a new life as close as possible to the Sunset Strip. With the fortuitousness which always surprises one in retrospect, he collided with the girl of his dreams. The marriage survives, but Gazzarri’s has not.

Ken lives in Pasadena, California with his wife, two tireless children, and two increasingly invisible cats. Seconds after the kids fall asleep, the pair boldly appear like a scene from Lady and the Tramp. When he is not writing books, Ken still enjoys writing songs and playing 80’s rock ballads on his acoustic guitar, which always sounds best when his wife sings a perfect harmony over the chorus.

3 winners will each receive an ARC of MIND RIOT, when available. Open US Only.

Such a bold, eye-catching cover! I really enjoy books about mental health hospitals and mental health in general. This story sounds very promising.

The cover is very cool and the book sounds emotional.

0
The cover is very cool and the book sounds emotional.
Cancel Update Comment
How to resolve AdBlock issue?
X