Before we get to the cover, here's a note from the authors:

The soldier on the cover of Enduring Freedom reminds me of the first American I ever saw.  Corporal Trent Reedy and I were about the same age. I feared his rifle, and he was so scared of all of us that he ordered me to back away from the wall he was guarding. But before he left my home city of Farah, shown in the background, we stood close together as friends like on this cover.  Enduring Freedom. Enduring Friendship.

Hi YABC, welcome to the cover reveal of Enduring Freedom! With the cover of our new YA novel Enduring Freedom, Algonquin Young Readers portrays the way my time in the war in Afghanistan wasn’t nearly as much about fighting the Taliban—who are notably absent from the cover image—as much as it was about standing on common ground with good Afghan people, holding that weapon and keeping watch and with my fellow soldiers saying to them, “I will do everything I can to make sure our terrorist enemies don’t hurt you today.” A novel doesn’t get more personal than this, and despite being home from the war for fifteen years, I struggle to contain my emotions as Enduring Freedom’s cover makes me remember the heat, smell, dust, fear—and friendships and joys of my many days in Afghanistan. 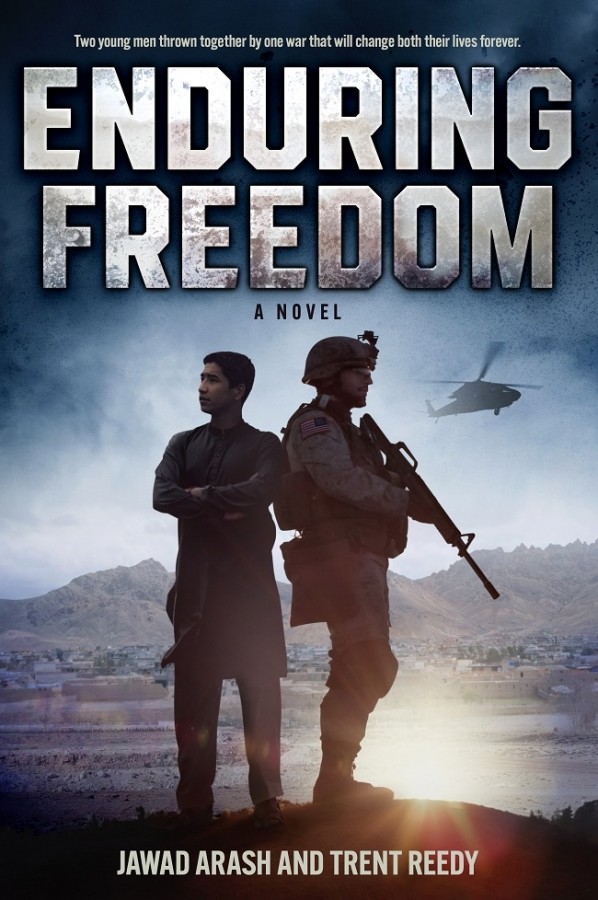 On September 11, 2001, the lives of two boys on opposite sides of the world are changed in an instant.

Baheer, a studious Afghan teen, sees his family’s life turned upside down when they lose their livelihood as war rocks the country.

A world away, Joe, a young American army private, has to put aside his dreams of becoming a journalist when he’s shipped out to Afghanistan.

When Joe’s unit arrives in Baheer’s town, Baheer is wary of the Americans, but sees an opportunity: Not only can he practice his English with the soldiers, his family can make money delivering their supplies. At first, Joe doesn’t trust Baheer, or any of the locals, but Baheer keeps showing up. As Joe and Baheer get to know each other, to see each other as individuals, they realize they have a lot more in common than they ever could have realized. But can they get past the deep differences in their lives and beliefs to become true friends and allies?

Enduring Freedom is a moving and enlightening novel about how ignorance can tear us apart and how education and understanding can bring us back together.

Trent Reedy served as a combat engineer in the Iowa Army National Guard from 1999 to 2005, including a year’s tour of duty in Afghanistan, where he befriended Jawad Arash. Based upon his experiences there, he wrote his debut middle-grade novel, Words in the Dust, which won the Christopher Medal and was chosen for Al Roker’s Book Club for Kids on the Today show. His novels Stealing Air, If You’re Reading This, and the Divided We Fall trilogy were Junior Library Guild selections. His seventh novel, Gamer Army, was published in late 2018. Trent also writes a weekly military life column for the Washington Examiner. He lives with his family outside Spokane, Washington.

Jawad Arash's home country of Afghanistan has been at war throughout his entire life. Nevertheless, Jawad remained optimistic for his future. Despite challenges imposed by war or harsh Taliban regulations, he developed a love for learning and wanted to help build a new and better Afghanistan through educating people. To that end, he began teaching English in 2003 while he was still in high school. Later, he earned a BA in English at Herat University in 2011 and his master’s in Linguistics/TESL from Indiana State University in 2014. Jawad Arash is currently pursuing a PhD in linguistics and phonetics from the English and Foreign Languages University in Hyderabad, India. Since 2012, he has worked as an assistant lecturer at Herat University. He has presented papers widely in international conferences on English teaching and linguistics/phonetics. Enduring Freedom is his debut novel.

2 winners will each receive a galley copy of ENDURING FREEDOM. Open US only.

I'll be eagerly awaiting this one.

0
I'll be eagerly awaiting this one.
Cancel Update Comment
How to resolve AdBlock issue?
X