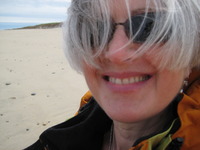 1. Why did you decide to write a YA historical?

The idea for Passion Blue was suggested to me by an editor who'd read one of my other novels--she said she'd always wanted to read a YA historical novel about astrology.

I originally came up with a double storyline--one set during the Renaissance, one during the present day, about two girls struggling to follow their talent for painting and linked by a magical astrological talisman. After some negative editorial feedback on the contemporary storyline (and also because I was concerned that two storylines would make the book too long), I decided to focus on just the Renaissance storyline. This also let me concentrate more on art, and on the technical details of a Renaissance painter's workshop—things that have always fascinated me.

I've written two other YA historicals, so I'm very comfortable with that genre. But I also love fantasy (all four of my adult novels are epic fantasy), and I like genre-bending. So Passion Blue also has a fantasy element (a magical astrological talisman) that’s woven into the historical setting.

2. I love all the details in PASSION BLUE.  Have you been to Italy?  If not, how did you do your research?

Thank you! World building is one of my favorite parts of writing—painting pictures with words.

I traveled in Northern Italy with my parents when I was a teenager. We visited Milan, Vicenza, Padua, and Venice. I remember Italy as gorgeous but crumbling, with the evidence of history everywhere beside the bustle of modern life. I have especially vivid memories of Venice, which I found exotic and a little sinister, with its dark canals and its narrow streets opening unexpectedly into little squares.

I wish I could have traveled for Passion Blue, but finances didn't allow. I did a lot of book research--I live in a college town and was able to used the university library. The Internet was also a huge help for verifying odd facts (what was a typical nun’s dowry?) and finding things that exist nowhere else, such as a video demonstration of how to use an astrologer's astrolabe. Also, I was lucky enough to spend an afternoon with a local artist who paints in the Renaissance style, watching him grind and mix pigments and paint with egg tempera--just as Giulia does.

3. How Humilità came up with the color Passion blue totally intrigued me.  Did you find other stories of nuns in the 15th century who did similar things?

Renaissance artists didn't usually buy their materials ready-made--they created them themselves, from the surfaces they painted on, to the brushes they painted with, to the paints they used. Paint recipes and formulas were trade secrets--as valuable to the painters who used them as industrial secrets are today. That's where the idea for the fabulous Passion blue came from--a recipe for a paint color so deep and radiant that it becomes famous not only for its beauty, but as an object of  desire for other painters.

Humilità is based on a real painter nun named Plautilla Nelli, who headed a busy artists’ workshop in 16th century Florence. She was well-known during her lifetime, with her paintings in demand outside the convent. Unfortunately most of her work has disappeared, but the beautiful fresco of the Last Supper that she made for her convent's refectory still exists, and was the inspiration for the fresco that Giulia admires in Passion Blue.

4. Loved the whole mean-nun thing too that showed even though they were in a House of God that there were obvious class divisions.  Did you base your scenes on some actual accounts of this happening in history?

The class divisions in the convent are authentic. Noble marriages were expensive--there was huge dowry inflation in 15th and 16th century Italy--and many families couldn't afford to dowry all their daughters. Also, there was a shortage of husbands--to avoid breaking up the great estates, many families only allowed their only eldest son to marry.

At the same time, families didn't want to support their unmarried daughters for the rest of their lives. So Italian convents became a kind of warehousing system for excess noblewomen, with servant nuns to do the manual work, since of course noblewomen couldn't be expected to scrub floors or wash their own bedsheets.

Just as in Passion Blue, some of the women embraced the convent, either because they had a real religious vocation or because they could live a luxurious lifestyle without any male interference. Other nuns were extremely angry and bitter about their fate. There's a book called Paternal Tyranny by a 17th century nun named Arcangela Tarabotti, who was dumped in a convent by her family at age 11 and was forced to take vows against her will. It’s a really scathing indictment of the way young girls were stuffed into convents.

As for the nasty novices who harass Giulia...I think mean girls are probably one of those things where you could go back to 500 BC and it’d essentially be the same as today!

5. What’s your inspiration behind PASSION BLUE?

Definitely, my love of art. I don't have any artistic talent whatsoever, but I've always loved painting, especially 15th and 16th century Italian painting. Passion Blue let me immerse myself in the painter's world, and become a painter myself for a little while (at least in my imagination).

6. What was your favorite tidbit when researching 1487, Milan, Italy?

Supposedly (I wasn’t able to verify that this is actually true) there’s a law in Milan that requires all the inhabitants to smile at all times or face a fine (exceptions: funerals and visiting sick people in hospitals).

7. What is your writing schedule like?  Are you a plotter?  Or a seat of the pants writer?

When I first started writing, I was a total pantser. I'd know the beginning and the ending and have a vague idea of what happened in between, but other than that I wouldn't have a clue. I'd just dive in and write whatever came to me. But I was constantly writing myself down detours and into dead ends, and had to spend a lot of time backtracking and figuring out where I went wrong. Plus, by the time I got to the end my ideas would have changed so much that the beginning had to be changed as well, forcing me to do a lot of extra revision work.

After my third  novel, I realized something had to change, and I forced myself to become a plotter. I start every book by writing a detailed synopsis, where I work out the main plot points, themes, and character arcs, so I know I can get from start to finish without getting stuck. Then I put the synopsis away and don't look at it again. Because I’ve established a structure, I don't go off track. Because I'm not constantly referring to a template, I have room for inspiration, for those wonderful "aha" moments where characters pop up who you didn't plan, or ideas that you didn't know were connected suddenly mesh.

I write at least five days a week. I know most people say you should write every day, but I need the down time to recharge my creative batteries. Not to mention, do the laundry.

8. What is your next project?

Right now I'm working on a sequel to Passion Blue, which will take Giulia out of the convent and off to the beautiful, exotic, and sometimes dangerous city of Venice, still in pursuit of her painting dream. And yes, readers will find out the secret of Passion blue.

Victoria Strauss's website where you can find out more about her books/blog tour: http://www.victoriastrauss.com/

Passion Blue is avaiable at: http://www.victoriastrauss.com/books-2/young-adult/passion-blue/